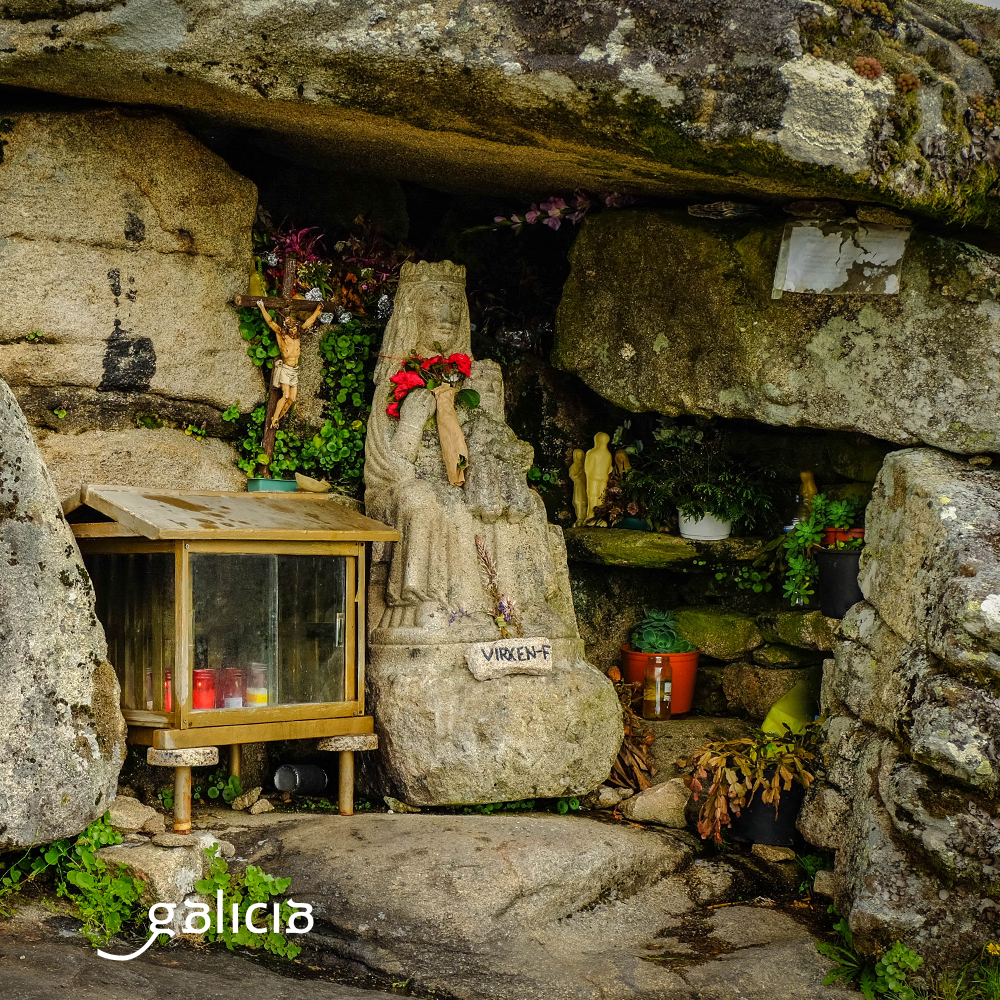 A multitude of routes cross all of Galicia, discovering those who enter them the innumerable charms of this land. Some are monographic and focus on very specific aspects of our heritage (natural or architectural), our history or our ethnography, but there are some that combine several of these diverse elements to offer us the possibility of making a broader approach without any other requirement than having a few hours of free time and desire to enjoy the trip. To this second group belongs a route that runs through lands of the municipality of A Cañiza (Pontevedra) rise to the top of the mountains of the region of A Paradanta showing us places where leisure, history, devotion and legends intermingle.

The starting point of this tour is one of the most important and well-known devotion centers in all of Galicia. The sanctuary of Nuestra Señora da Franqueira is located in the church of a monastery that has already disappeared and is the scene of two pilgrimages of great popularity and tradition that have led to the celebration being declared a Festival of Tourist Interest. Faithful from all over Galicia and northern Portugal come there to show their devotion to one of the oldest Marian images in the community and that has a legend that links she directly with other points on this route. The Virxe da Franqueira is the protagonist of two celebrations with different elements: the Pilgrimage of Las Pascualillas, which is celebrated on Pentecost Monday, and the Pilgrimage of September or the Nativity of the Virgin, which takes place on 7, 8 and September 9. But any time of the year is good to visit a temple where Romanesque and Gothic styles coexist.

An ancient source of Romanesque traces confirms the passage of pilgrims through the place for centuries. The angel who crowns it gives the place its name and has also caused the Virxe da Franqueira to be known also as the Virgen de la Fuente. It is not necessary to go to the sanctuary to stop on site and refresh.

The cross placed on top of the mountain marks the end of the Via Crucis placed half a century ago and opens the doors to a spectacular natural viewpoint from which it is possible to contemplate and admire the landscapes of much of the province of Pontevedra and even peaks of Ourense. Early risers will be able to enjoy a beautiful sunrise from there, although another option is to leave this visit for the last moment of the day and watch the sunset from there.

Inspired by the “castros”, these small circular fences with benches inside are a good place to stop for a rest while still enjoying the landscapes that surround us. The Sierra de O Suídos and the mountains of Portugal are from here within our eyes’ reach.

One of the main vestiges left by the monks who inhabited the old monastery of A Franqueira is also found in the heights of these mountains. It is a icebox built by the friars in the middle of the last millennium to take advantage of the snow that fell on the top in winter. The deep well dug and protected by stones allowed them to store this snow in the form of ice and use it at other times of the year for various uses such as food preservation and therapeutic purposes.

The highlight of the tour connects us again with the A Franqueira sanctuary, although in this case not with the monks, but with its most famous inhabitant: the Virgin’s own image. It is a small grotto where, according to tradition, the image remained hidden for centuries until it was found by an old woman. Legend has it that the sculpture was mounted on a cart pulled by oxen whose eyes were covered so that it would be the Virgin herself who would guide them to the place where she wanted her sanctuary to be raised. The recreation of part of the story of that trip is nowadays one of the most outstanding acts of the pilgrimage that is celebrated in September. Faithful and neighbors also participate in a route that is carried out in reverse. The image that can be seen today in the Coto da Vella was made by the stonecutter Celso Calviño García in 1968 to remember the symbolic importance of the place.