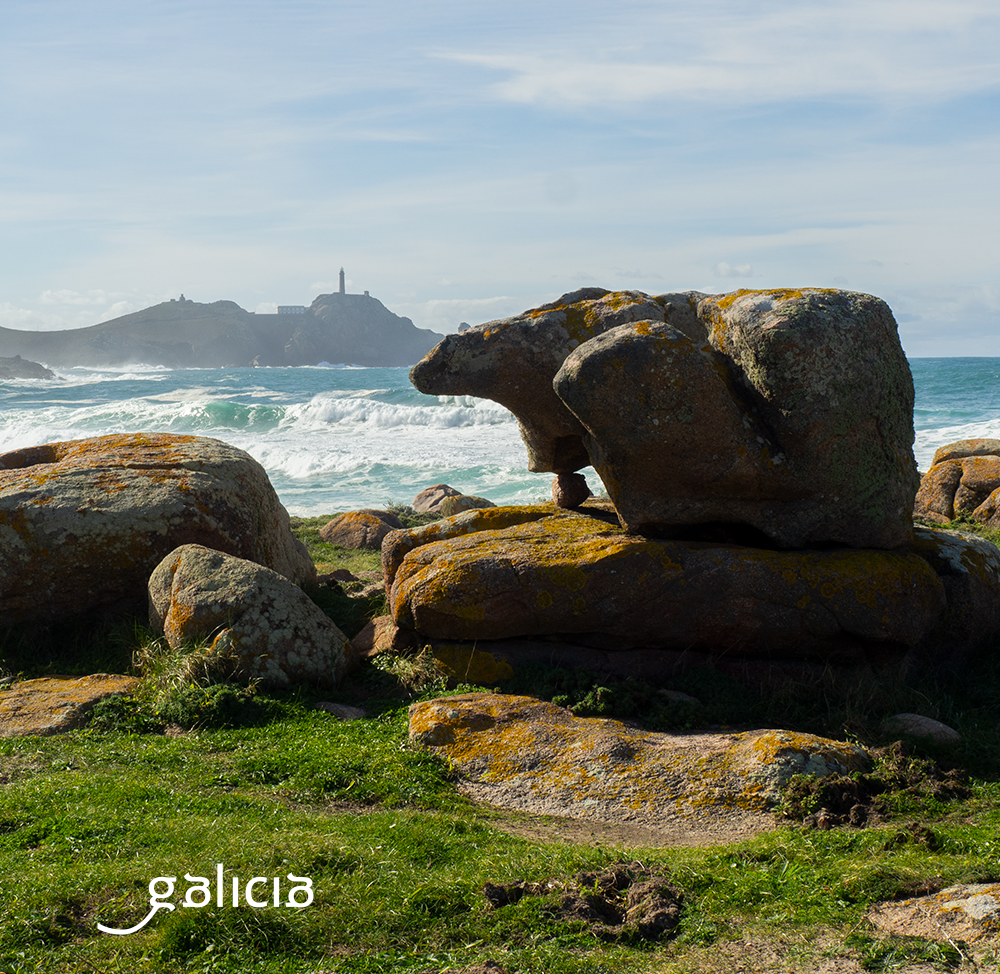 Lying on the Atlantic, the Camariñas peninsula is one of the most iconic and magical places on the Costa da Morte. The waters that bathe its coasts and its beaches, the people who inhabit its towns and villages, and the cliffs and mountains that rise above its lands treasure stories of shipwrecks and heroism, examples of secular traditions and relics that whisper the way of life of its first inhabitants.

Camariñas looks to the south, towards the protecting waters of the estuary that it shares with the neighboring municipality of Muxía. But it also looks to the north, towards the dangerous waves of the ocean, a space that has become both a source of life for this fishing village and the scene of tragic events whose footprint still remains visible as a reminder of the dangers of the sea and as homage to those who lost their lives. And it is there, where the waves hit a strip of land that alternates sand and rock, where we can find a place that combines many of the attractions that have made Camariñas an must-see for all those who visit the Costa da Morte.

Famous for its “encaixe” (roll craft), the municipality has much more to offer. A good example of this is the Reira area, a place halfway between the Vilán and Trece capes. This is a place hit by the sea and by the wind, but it gives us several white sand beaches (Area Grande, Area Longa, Pedrosa…) where you can enjoy the heat and its cold waters on summer days, take walks at any time of the year and contemplate its fantastic views. To the west stands the silhouette of Cape Vilán and its emblematic lighthouse, built in the late 19th century after the tragic shipwreck of the British cruise ship Serpent, in which almost two hundred people died.

The lighthouse reminds us of the danger in the area, but it also gives us beautiful views, especially at dusk when the sunlight begins to disappear and to be replaced by the powerful artificial beam of the tower raised on the cape. Many people go there to contemplate this spectacle, but from the Reira area we find a different panoramic view of the sunset.

This is not the only wonder of nature that we can enjoy in the place. The water and rocks also join forces there to give us authentic works of art that make the viewer doubt if nature has been able to sculpt pieces in such unique ways. This is what happens when we contemplate Pedra dos Namorados (Lovers Stone), two big rocks that seem to melt into a passionate kiss, or when we discover that whoever named Pedra do Oso (Bear Stone) with that name was doing it justice. It is hard to believe that the stony animal that stands defiantly on the rocks was not modeled by the human hand. His figure is one of the most photographed spots in Camariñas and attracts the attention of many curious and visitors. Part of its current fame is due to a curious event that occurred 18 years ago now, when the stone mysteriously disappeared from its habitual abode. A few days after the neighbors alerted to the subtraction, the figure appeared in A Coruña, the city to which it had been transported by a company to use as an ornament for a new construction. The Pedra do Oso returned to Reira without one of its legs, but the event served to highlight this natural monument.

In its surroundings, but a little further from the sea, other stones also draw the attention of visitors, although in this case it is not a matter of nature’s whims, but rather of the legacy of activities carried out by the ancient inhabitants of the area. This happens with the Mámoa de Reira, a megalithic funerary monument whose construction dates back to the period between the Neolithic and the Bronze Age. Under the accumulation of stones and earth rest the remains of the people who lived there several millennia ago. More recent is the Foxo dos Lobos (wolves moat) built not far from there and which keeps the memory of a common practice in many parts of Galicia, but disappeared more than a century ago. They are two stone walls that converge in a moat and were used to capture the wolves that threatened livestock.

All these places are within the reach of anyone visiting the area and those who follow the route of several of the itineraries that cross that part of the Camariñas coast, such as the municipal routes Costa da Morte and Litoral, or the fifth stage of Camiño dos Faros (Lighthouses Way).