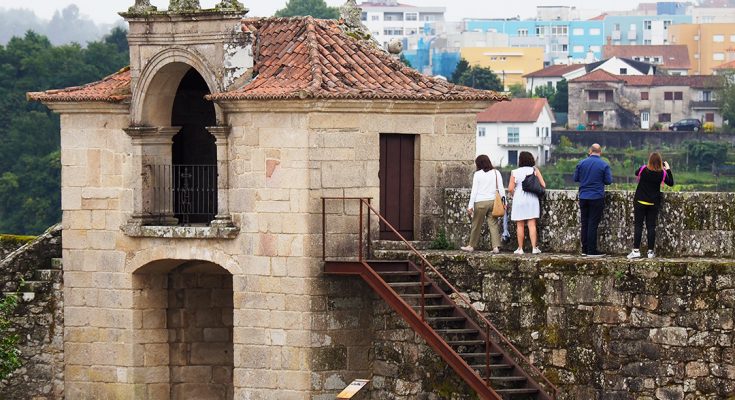 The figure of Dona Urraca, Urraca I La Temeraria, Countess of Galicia, Queen of León and Castilla, is very present throughout Galicia. Ramón Cabanillas already said that the queen traveled this land “in crazy rides from castro to castro” from “Soberoso to Samos from Lugo to the ribeira”.

At that time, in times of the Reconquest, Galician destiny was in the hands of the clergy, the nobility and Dona Urraca and her family. Being the eldest daughter of Alfonso VI, King of León, Galicia and Castile, and at the death of her brother, the only heiress, she always had a hard time reigning. The determination to retain power in Galicia led her to constant conflicts: with her sister Teresa, with her son Alfonso, supported as heir to the throne by her and by the Count of Traba y Xelmírez, with her second husband, Alfonso I El Batallador, with part of the nobility… All besieging each other every so often. But the main protagonist of the power struggles with the queen, sometimes a friend and sometimes an enemy, was Bishop Xelmírez.

The presence of Dona Urraca in Galicia is attested by the number of stories that circulate about her. It has become a character in our collective memory. She was the queen of treasures and underground passageways. Many properties here, many ceded to the clergy or nobility to keep people happy and not rebel. There were fortresses here and there to defend the territories and manage the collection of taxes.

In Galicia she gave birth to Alfonso, in O Salnés, in Caldas de Reis, in a castle on the banks of the Bermuño river, known as Dona Urraca Tower. From then on, the town would be called Caldas de Rex, and Caldas de Reis has remained until today. The tower, after having passed through many hands, was demolished at the end of the 19th century to build the church of San Tomé.

In O Salnés there is also the Lobeira Castle, in Vilanova de Arousa, from where the history of the Queen’s Crown comes from. It turns out that, in dispute with Xelmírez, Urraca spent time in the besieged castle. Just in case, he had ordered the treasure of the castle to be loaded on mules to Cangas, so that it would not end up in the hands of his rival. He threatened the queen, telling her to give him the crown if she didn’t want to lose her eyes. She proudly threw the crown into a mine deep in the castle saying, “You will gouge out my eyes, but I am the queen and no one can wear this crown.” Xelmírez was very offended…

The history of the treasure does not end there. Back in the 20th century, a woman who was uprooting some gorse with a hoe on Mount Lobeira found on the ground… A gold fork and spoon! Surely there are remains of the castle’s treasure… And, as there is no castle without a tunnel, it is also said that underground, between the top of Mount Lobeira and the Vista Alegre convent, in Vilagarcía de Arousa, runs the so-called Dona Urraca Tunnel. Apparently, in addition to having a hidden treasure, when the castle was besieged, the underground galleries would explain the arrival of food. The besieged were said to throw fishbones from the walls, boasting that they did not go hungry.

At the dawn of the 20th century, Secundino Castro became known, a man from Vilagarcia who spent half his life looking for the tunnels and the treasure. The poor guy didn’t find anything… A water mine was recently discovered in the area, which was perhaps used as a tunnel, so the man wasn’t misguided…

Another tunnel of Doña Urraca is the one at Sobroso Castle, at the top of Mount Landín, in Mondariz. According to Compostela History, the queen was besieged here by Teresa, her sister, who from Portugal supported Alfonso as heir to the throne. And how did Urraca escape from the situation? Well, through an underground passageway that took her to the banks of the Tea, from where she went to León. From there he asked Xelmírez for help to re-conquer the fortress.

It would be precisely in this castle that his son, it seems that finally with Urraca’s consent, would be proclaimed King of Galicia in 1109 by the Count of Traba. Two years later Xelmírez consecrated him as monarch in Santiago de Compostela.

In Salvaterra they also remember the queen. There, dominating the Miño, stood the Salvaterra Castle, also known as Dona Urraca Castle. Today it is the seat of the Museo do viño do Condado de Tea D.O. At that time, 1121, Urraca and Xelmírez directed the fights against Teresa from here. Every time he had a fight with her, Urraca came to this castle to dominate the situation.

One of the buildings that remains, with two floors, has a circular vaulted space known as the Dona Urraca Dressing Room. On the lower floor are the Doña Urraca Caves, where there is a well that, according to legend, was the entrance to a secret passageway that crossed Monçao below the Miño.

The queen has also left her mark in Monterroso, in Sirgal Castle. Here he stayed with Alfonso I when they came to Monterroso to contain the counts and company, who were in revolt against the kings. And there is also a passageway, of course.

From its passage through Valdeorras we have the remains of the Tower of Doña Urraca in Viana do Bolo. He was also present in Lugo, in Samos, in Mondoñedo, in Santiago, where he suffered with Xelmírez the uprising of the bourgeoisie, who cornered and outraged her, while he escaped hidden under a cloak on the rooftops… How many towers, pazos and tunnels of Doña Urraca will there be around there?

And she is still present in Galicia today, as it is not uncommon for her to appear at medieval fairs, singing ballads of the time, often accompanied by her son Alfonso VII.