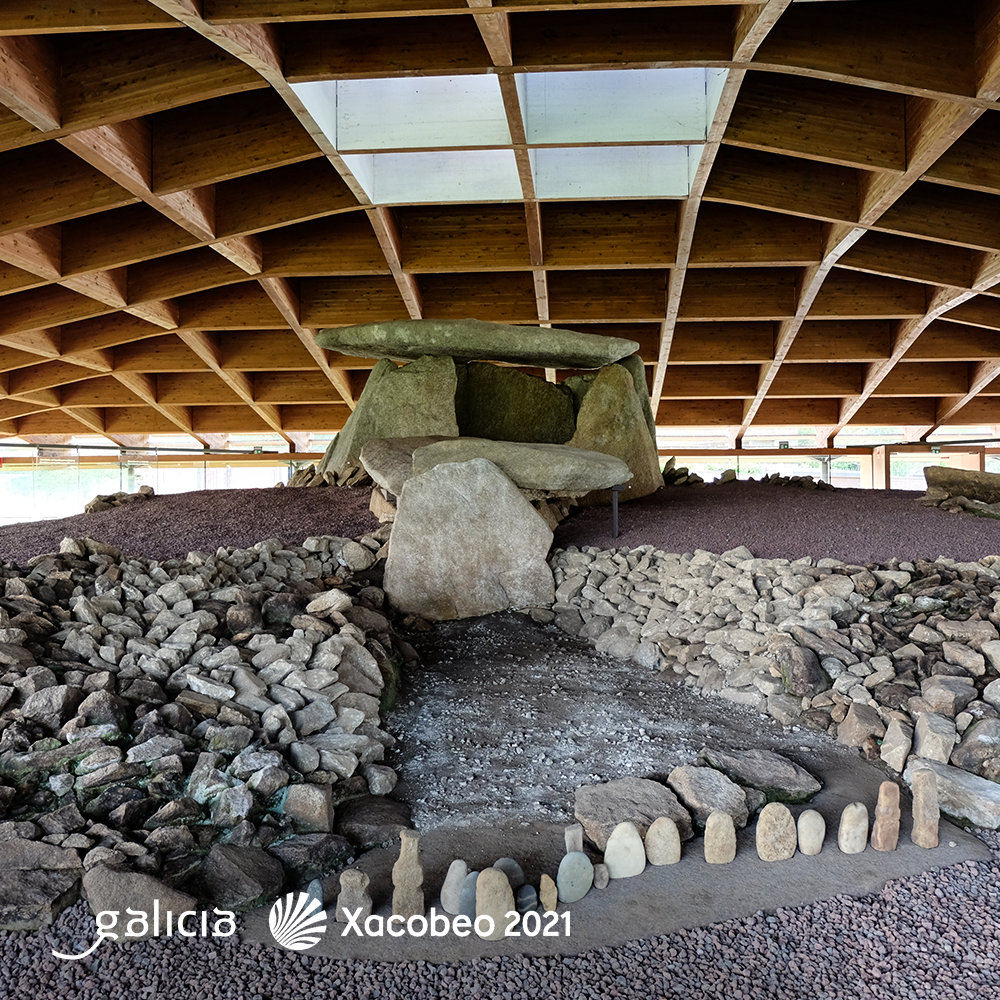 Remains of those who inhabited Galicia two or three millennia before our era, the dolmens stand today in many parts of the community as a reminder of ancient funeral rites and as a source of inspiration for popular culture. Their structures, made up of several large stones placed vertically and covered by another large slab forming a vault which was accessed through a stone corridor, still surprise us today. In past centuries its construction was attributed to mythological figures such as the “mouros” and the “mouras”, and numerous legends have also arisen around its imposing stones. Below we offer you a small guide to some of the most spectacular examples that you can see on your journey through Galicia.

Expressions such as the cathedral or the Sistine Chapel of Galician megalithic art reflect the importance that this monument located in the Bergantiños region has within the archaeological heritage of this community. Since a decade ago it has been protected inside a building erected to preserve especially its valuable paintings. Its interpretation centre also has a life-size replica of the interior of the vault so that visitors can see what is hidden inside the enormous stones that inspired poets such as Eduardo Pondal. Excavations in the area have shown that the current dolmen was built on top of an older structure.

Another of the most famous dolmens in Galicia is located in the parish of Oleiros (Ribeira). Also known as Pedra do Mouro, the one in Axeitos is one of the best preserved megalithic monuments of this type in the whole of the Peninsula and is framed by a tumulus of about 30 metres in diameter. More than half a dozen slabs covered by another large stone form its vault, which is about 2 metres high. Located in a wooded area, it is a must for those who go to the Barbanza region.

The huge slab that covered this dolmen located in the municipality of Malpica was split in half using explosives several decades ago. The two fragments remain fallen on the vertical slabs that originally supported them, but this does not prevent us from imagining the majesty of this construction erected at the height of the megalithic culture.

These two dolmens are located in the necropolis of As Maus de Salas, next to the waters of the Salas reservoir. In fact, the Casiña da Moura had to be moved from its original location to avoid being affected by the rising waters. Both in this case and in the neighbouring Casota do Foxo, its chambers are more than two metres high and are formed by seven orthostats (large stone blocks placed vertically) which hold another huge stone.

The size of its slabs and the diameter of the mámoa make the Pedra da Arca dolmen one of the largest in Galicia. The upper slab alone weighs around 12 tons. It also stands out for the remains of engravings and paintings that can be seen inside. It is located in a municipality, Vimianzo, which is especially rich in megalithic heritage and where it has designed a specific route to show its main points of interest, such as the Pedra Cuberta dolmen, which was already studied 90 years ago because of the paintings in its corridor.

The small islet of Guidoiro Areoso stands out because, despite its small size and the fact that it is mostly made up of sand, it houses several archaeological remains. Specialists have identified at least five mámoas (tombs formed by a dolmen covered by a mound of dirt) and have carried out several excavations to try to find out the extent of these structures. It is believed that at the time of its construction the site formed part of a peninsula and was not as exposed to the action of the tides as it is today. The changes in the currents of the estuary in the last decade threaten its conservation.

Situated in the heart of the natural park of Lake Castiñeiras, the Mámoa do Rei is the main monument of the megalithic complex of A Chan de Castiñeiras, one of the most important in Galicia and which is located in the lands of the Pontevedra municipalities of Vilaboa and Marín. A tumulus measuring 30 by 20 metres with a dolmen in its centre forms the Mámoa do Rei, which was restored at the beginning of this millennium. During the excavations carried out in the area, several anthropomorphic idols were found and inside the dolmen’s vault there are several figures engraved in the stone.

As in many other cases, in past centuries a legendary origin was attributed to the spectacular dolmen located in the parish of Cabaleiros, in the municipality of Tordoia, A Coruña. The inhabitants of the place transmitted from generation to generation the history of a “moura” that had been seen weaving inside this structure formed by seven stones covered by a large slab of more than 12 square meters, hence it was popularly known as the House of the Moura. This dolmen was declared a historic-artistic monument in 1975.