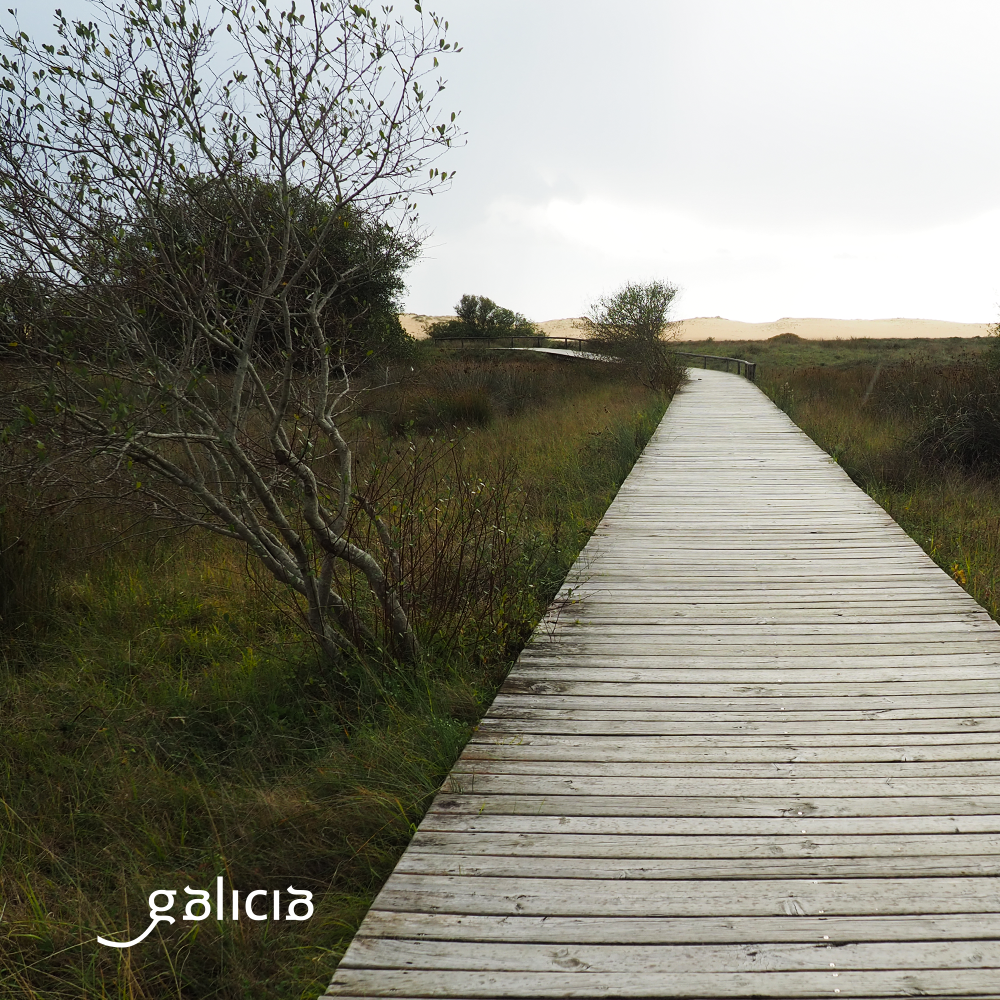 The Axeitos dolmen, the Sálvora archipelago, the Castro da Cidá, viewpoints, museums, beaches… There are many tourist attractions in the municipality of Ribeira in A Coruña. But surely none of them awakens the astonishment and stimulates the imagination as the Dunar Complex of Corrubedo. Located at the westernmost tip of the Barbanza Peninsula, this space presided over by a large mobile dune is also a reference point for the entire northwest of another, larger peninsula, the Iberian Peninsula, and is a clear example of what the forces of nature combined with the passage of time are capable of doing.

The spectacular succession of beaches (A Ladeira, A Lagoa, O Vilar and Anguieiro) that form a front of about 5 kilometers in length keeps behind it a space formed in the Quaternary period, more than 10.000 years ago, and that is also integrated by the lagoons of Carregal (salt water) and Vixán (fresh water). Erosion, wind action and sedimentation processes are responsible that the original bay that existed in the area had given way to the lagoons and marshes that we can see today and the large dune that rises in the northern part of the complex. This is an ecosystem of great scenic value and, above all, environmental due to the uniqueness of its flora and fauna, which has led to the entire area being considered a Natural Park since almost 30 years.

The mobile dune of Corrubedo, with its impressive dimensions (one kilometer long, between 200 and 300 meters wide, and almost 20 meters high), is the most visible and famous element of the place and the reason why many visitors come there. For logical reasons of conservation, access is limited to prevent the action of visitors from altering its natural evolution, but a wooden walkway allows you to approach it and enjoy beautiful views of both the dune itself and the marshes and the nearest lagoon, Carregal.

The complex, which occupies a total area of about 1,000 hectares, has several marked trails so that visitors can walk at their leisure while enjoying the beauty of the surroundings and appreciating its fauna and flora. Two of them start from the surroundings of the dune: the Camino del Viento (Wind Path) and the Camino do Rio do Mar (Sea River Path), which are 1.5 and 3.5 kilometers long, respectively, and both start at the Olveira information point. Further south, halfway between the Carregal and Vixán lagoons, are the Visitor Reception Center and the Center for the Interpretation of the Coastal Ecosystem of Galicia (Cielga), which, in addition to hosting exhibitions and other diverse informative activities, serve as a gateway to two other trails: the Beach Trail and the Gandarela Trail, both of low difficulty, and 1.5 and 6 kilometers long, respectively. The Water Way, which starts from the parking lot at Vilar beach and is 2.5 kilometers long, completes the network of trails in the natural park.

Birdwatching is one of the great attractions of the place since it is possible to see a wide variety of species throughout the year, but especially between the months of September and April. In fact, this is one of the highlights of the Galicia Birding program, which proposes three different routes (two by car and one on foot or by bicycle) to enjoy the ornithological richness of the place in depth.

Its surroundings also offer several viewpoints, such as Pedra da Rá (near Castro da Cidá), from which you can enjoy impressive panoramic views of the entire natural park and confirm that this is a true paradise of sand, water and birds.