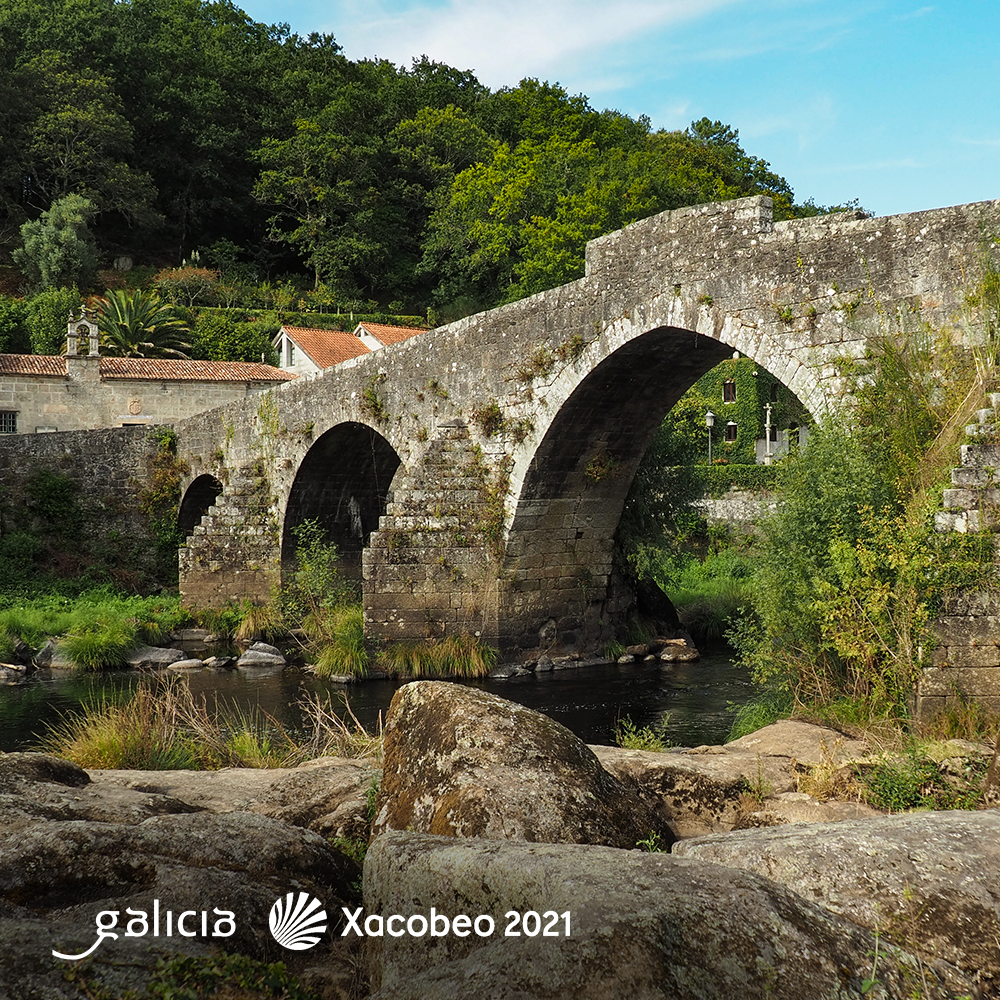 If rivers are the arteries that irrigate and fill the lands of Galicia with life, bridges are the constructions that since time immemorial have served to cross these currents, creating social, economic and cultural links. Hundreds of viaducts stand over our rivers, making up a rich heritage that, in many cases, adds to its architectural values an unquestionable historical importance. Episodes of great transcendence have taken place over many of these viaducts, as we invite you to see for yourself with this short tour of some of these bridges to history.

O Burgo bridge is not only one of the best known landmarks of Pontevedra. Without its presence, much of the city’s history would not be understood. An earlier viaduct gave its name to the town and over the bridge, which with various modifications has survived to the present day, the Lérez pact was signed in 1165 between Ferdinand II and Alfonso I of Portugal to try to put an end to Portuguese incursions into Galician lands. The bridge of O Burgo also witnessed other disputes over the centuries and also suffered the onslaught of the forces of nature, such as a flood that caused significant damage in the mid-17th century. In 1719 it was the English who left their mark on the viaduct. As part of the War of the Quadruple Alliance, the English troops that had taken Vigo for a few days also attacked Pontevedra and destroyed the Tower Bridge that stood at one end of the viaduct and the prison building attached to one of its sides.

The viaduct that links the municipalities of Negreira and Ames, giving its name to the pretty village of A Ponte Maceira, was built in medieval times and played an important role in two conflicts in which two archbishops of Compostela took part. The “Historia compostelana” describes a 12th century conflict in which troops of the Compostelan archbishop Diego Gelmírez and the count Pedro Froilaz de Traba were involved. In 1471, the same pass over the River Tambre was the scene of part of the armed dispute between the supporters of Archbishop Alonso de Fonseca II and the troops of Lopo Sánchez de Moscoso for control of the lands of A Maía. This confrontation, also known as the Battle of Altamira because what was at stake was the control of the fortress that bears that name, took place partly in Ponte Maceira because it was there that the archbishop’s troops clashed with a contingent that came to the aid of Sánchez de Moscoso’s men.

The medieval bridge of O Burgo, which joins the municipalities of Culleredo and Cambre at the beginning of the estuary of the same name, did not escape the consequences of one of the most important battles of the War of Independence in Galicia. The opposing sides were the British troops led by General John Moore, who had come to the Peninsula in support of the Spanish troops, and a French army corps under the command of Marshal Jean-de-Dieu Soult. After the failure of the Spanish campaign, the British headed for A Coruña with the aim of embarking back to the islands. Shortly before reaching their destination, in mid-January 1809, they did not hesitate to blast the bridge at O Burgo to delay the French advance. However, the existence of an alternative pass nearby and the rapid repair of the viaduct allowed the Gallic troops to catch up with their enemy before he had completed the evacuation and force him to fight a bloody battle. The end result was hundreds of deaths, including that of John Moore himself.

Shortly before arriving in A Coruña, the French and the English had also crossed the Cruzul Bridge, in the Lugo region of Becerreá, although there is no consensus on the specific circumstances of that episode. Some argue that the French had planned to demolish with explosives this structure, built over a tributary of the River Navia at the end of the 18th century, in order to prevent the English from retreating. But there are also those who argue that it was the english who planned to blow it up in order to interrupt the march of their pursuers. What there is more consensus on today is that, despite the idea that was quite widespread in the past, neither one or the other fulfilled their plans and the viaduct was never blasted, although it would have undergone modifications at a later date.

There are fewer doubts about what happened to the Sobradelo bridge, which spans the river Sil in Carballeda de Valdeorras. In this case, the chronicles tell us that its central arch was blasted by the abbot of Casaio at the beginning of 1809 to stop the French once the troops led by the Marquis of La Romana had crossed it. It took almost 100 years for the wooden framework with which it was temporarily repaired to be replaced by the new structure that can be seen today.

The French presence in Galicia was seriously affected after the battle that took place in mid-1809 over the waters of the river Verdugo, on the border of the current municipalities of Pontevedra and Soutomaior. There is the imposing bridge of Ponte Sampaio, a medieval viaduct probably built on the foundations of an earlier Roman pass, which the French intended to use to regain the positions lost during the previous weeks in the south of the province. The French troops, made up of almost 10,000 soldiers and horsemen, arrived at the site on June 7th and were met by a heterogeneous defensive contingent of regular troops and volunteers organised under the command of Colonel Pablo Morillo, who had even knocked down several of the bridge’s arches to prevent passage. The Gallic attacks were unsuccessful and on 9 June Marshal Ney was forced to order his troops to withdraw.

The victory at the Battle of Ponte Sampaio would perhaps not have been possible without the development of another battle that took place a few kilometres upriver on a bridge built in the 16th century and which gives its name to the municipality where it is located: Ponte Caldelas. This was the pass chosen by the French to try to outwit the resistance they had encountered at Ponte Sampaio and surprise their enemies from the rear. But they did not expect to meet a group of peasants and noblemen led by Francisco Oubiña, lord of the Pazo do Coto de Forzáns, who were ready to confront them. Their heroism was rewarded and they managed to repel the French attack.

A Estrada and Teo

The work of the locals to stop the French was also key in this strategic point on the river Ulla where the Ponte Vea bridge stands. Several clashes took place there during the first half of 1809, which led to the collapse of some of the arches by the local inhabitants on several occasions and the subsequent repair by the invading troops. The original structure was built in the 16th century, but over the centuries it underwent several modifications, not only to deal with the consequences of the War of Independence, but also to repair the damage caused by the floods.

The bridge of Ponte Ledesma, on the border between the municipalities of Vila de Cruces and Boqueixón, the bridge of Pazos de Arenteiro (Boborás); A Ponte Bibei, between Quiroga and A Pobra de Trives, the Mourentán Bridge (Arbo), the As Achas Bridge (A Cañiza) and A Ponte Arante (Ribadeo) are other centenary viaducts that played an important role during the War of Independence and were the scene of heroic displays by the local population.