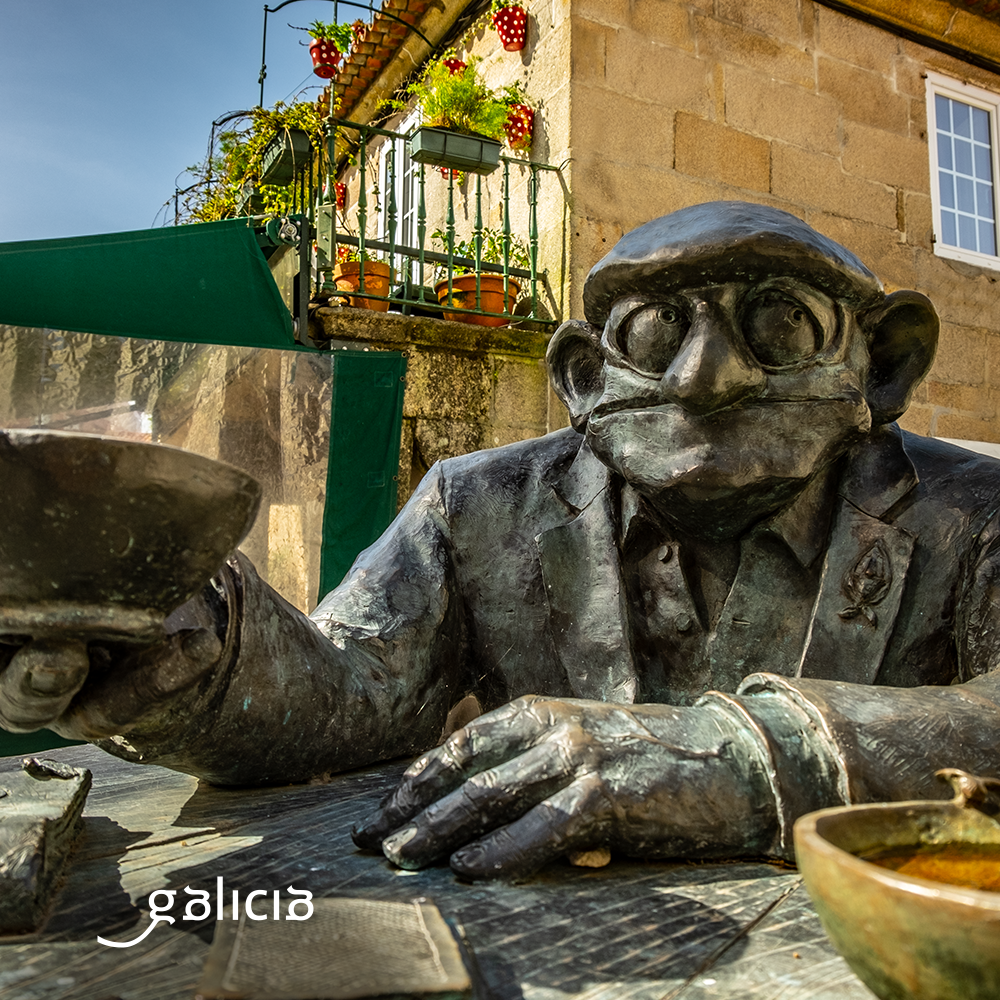 Now largely devoid of its original meaning of commemorating a biblical episode, Holy Innocent’s Day, celebrated on 28 December, has become synonymous with jokes. However, in Galicia, a land of sarcasm, laughter is something that extends through time and territory and is present in the most diverse spheres of our lives beyond this day included in the Christmas festivities. Below we propose a journey through some of the places and days in which our passion for humour can be seen.

Museum of Humour in Fene

Among the dozens of thematic museums that exist in Galicia, one dedicated to humour could not be missed. It is in Fene and was opened in 1984 thanks to the efforts of the illustrator and graphic humorist Xaquín Marín and the support of the city council. In its installations you can see more than 300 original works of the main Galician humorists, as well as artists from the rest of Spain and international creators. It also has several sculptures, a collection of publications and concave and convex mirrors so that visitors can laugh at themselves.

Humour Square in A Coruña

The city of A Coruña also has a space dedicated to masters of humour. In this case, it is a central square, formerly known as the Eggs Square because of the market that used to be held there. Today serves to pay homage to some of the Galician authors best endowed for satire and “retranca” and other creators and creations of universal scope. Two sculptures by Álvaro Cunqueiro and Castelao rest on stone benches next to the busts of Julio Camba, Vicente Risco and Wenceslao Fernández Flores and the images engraved on the floor of Groucho Marx, Mafalda and Mark Twain, among other authors and characters.

Sculptures of Floreano and O Carrabouxo

Many humorous characters have come out of the minds of Galician creators, but few can boast of having been immortalised in a bronze sculpture. One of them is Floreano, the popular character created by the graphic humorist Gogue more than 30 years ago. For almost a decade he has been enjoying his inseparable bowl of wine in a central square in O Grove, Gogue’s home town. Since 2002, O Carrabouxo, the famous character with whom Xosé Lois González offers us his satirical view of today from the pages of the press, has received similar homage in bronze in the streets of Ourense.

Ora et labora (pray and work) is a Latin expression that summarises the way of life inside Benedictine monasteries. It would not invite to include a monastery in a guide to humour. But in the case of San Xulián de Samos there is evidence that among the stonemasons who worked there was someone willing to do more than pray and work. He demonstrated this by sculpting a joke for posterity, which could well be considered a precursor to the classic “dumb who reads it”. In one of the keystones of the Gothic or Nereides cloister vault you can read the phrase engraved in stone “que miras bobo” (What are you looking at, fool?).

Goal of the Way of Saint James and one of the main monuments of Galicia, the Cathedral of Compostela is another place for prayer and meditation that keeps within its centennial walls some samples of the sense of humour of those who worked there. The mischievous look that shows the statue of the prophet Daniel in the Portico of Glory and which is associated with the contemplation of the bust of the figure of Esther is proof of this. In addition, in a capital in the area of the temple’s roofs, one can see a sculpted stone human bottom that, according to some scholars, would have been the humorous way chosen by a stonemason to express his discomfort at the poor working conditions. And at the top of a remote column inside the cathedral there is a small carving of a person that, according to some scholars, could be the self-portrait of another stonemason.

The humour related to the stone also extends to the environment of the cathedral of Compostela in the form of traditional jokes. The two most recurrent ones have as a stage two fountains (those located in the squares of Cervantes and Platerías) and a common mechanic: inviting someone to try to see the part of the sculpture that is hidden under the water and splashing him when he does. A classic from Compostela that has been repeated for generations.

Few traditional festivals in our calendar are as irreverent as the entroido. Surrendering to excess on the eve of Lent by performing secular rites are some of the ingredients of a celebration in which humour, jokes and laughter play a fundamental role. The battles of Domingo Fareleiro of Xinzo de Limia and the Farrapada of Laza are just two examples of the fun and playful spirit of a celebration that has other highlights in Viana do Bolo, Cobres (Vilaboa), Manzaneda, the region of Ulla, Maceda and Vilariño de Conso. To enjoy them you have to wait to the days and weeks before Lent, although in Xinzo de Limia it is possible to visit this celebration all year round thanks to its Galician Museum of O Entroido.

The night of San Xoán

The traditional bonfires are not the only protagonists of the San Xoán in Galicia. The shortest night of the year competes in many localities with the Holy Innocents’ Day for the throne of the great day of jokes. Especially in the rural world, it is common that during this evening, young people devote themselves to the task of moving carts, ploughs, other farming implements and even small fishing boats from their usual places to central areas of towns and villages or to places that are difficult to reach.

The Day of the Deceptions

“O un de abril van os burros onde non deben de ir” (on April 1st donkeys go where they shouldn’t go) says a traditional saying demonstrating the preponderance that in times had in Galicia the 1st of April over the 28th of December as a day of jokes. This tradition is linked to the Anglo-Saxon April Fool’s Day and to similar customs in countries such as Germany, France or Belgium, as documented by Otero Pedrayo in his Historia de Galiza. It is a day of jokes and false news that has gained momentum in recent years thanks to the initiatives launched by various entities.