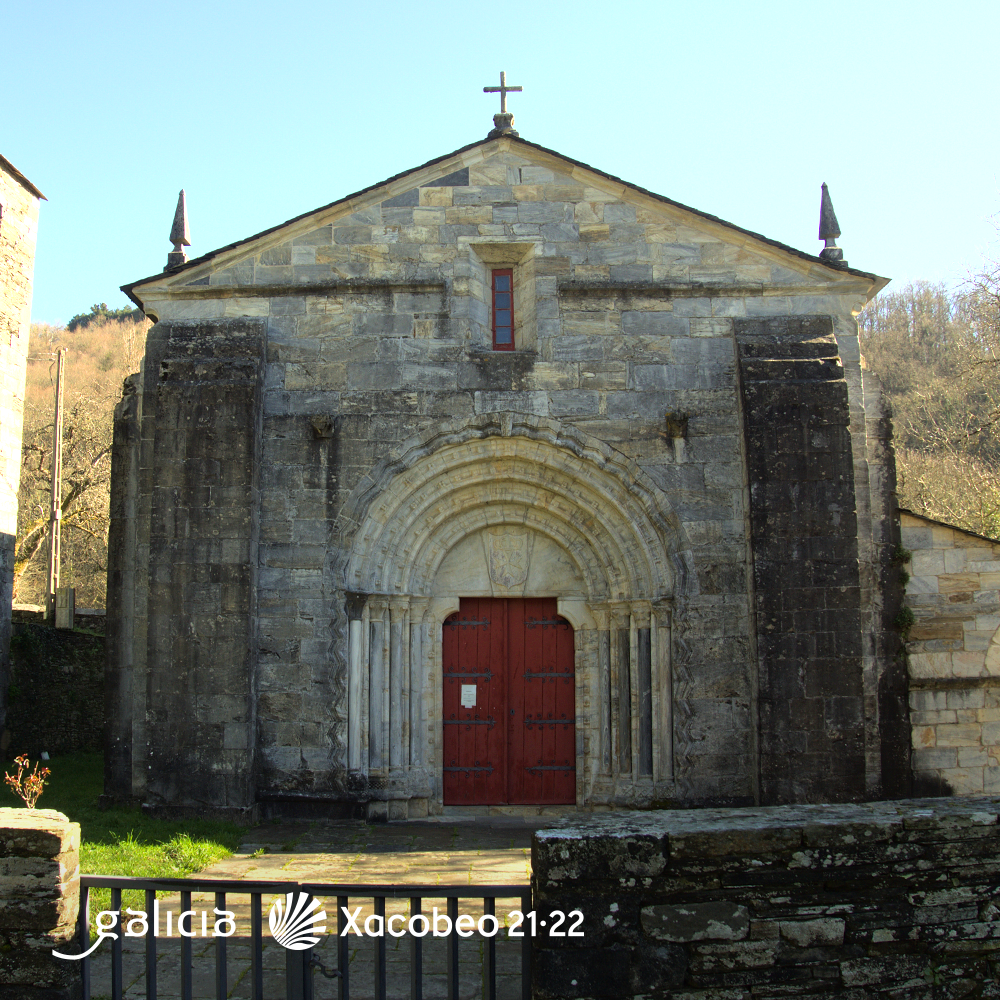 The Galician countryside keeps a huge and valuable architectural heritage whose origins date back to the Middle Ages. Churches, chapels and monasteries are sometimes hidden between valleys and mountains as witnesses to a very distant past, but which is still capable of surprising those who look at it. This is the case with the church of San Pedro Fiz de Hospital, located in the Lugo municipality of O Incio, and known for a peculiarity that jumps at first sight for everyone who visits it and that makes it an exceptional monument.

It’s a temple built at the end of the 12th century and the beginning of the 13th century by the Order of Saint John of Jerusalem (later, the Order of Malta) and which is located in an old variant of the pilgrimage routes to Santiago that linked the Camino French with the Winter Way. That is why it originally had a space for the care and shelter of pilgrims, although its connection with a military order also led to its architecture opting for a fortified aspect. In fact, the tower separated from the main body that currently serves as a bell tower would initially have had a defensive function. A second tower was converted in the 16th century into a pantheon for the Quiroga family. In the church there’s also an archway with the tomb of Fray Alonso de Quiroga that has inspired a legend according to which the church will collapse if someone opens the tomb.

But there aren’t these circumstances that make the church of San Pedro Fiz a unique construction. In this land where granite has been the raw material chosen to build most of the monuments erected before the appearance of more modern materials, the Temple of the Knights of San Juan surprises with the marble with which it was built in most of it and that gives it the characteristic colors of its front.

The quarries in the area, whose marble was used as early as Roman times for various works in the city of Lugo, supplied the necessary materials to build the church of San Pedro Fiz and that is why the temple displays surprising blue tones that create a nice contrast with the green of the nature that surrounds the whole. This original and beautiful effect is especially accentuated, according to what is said in the area, with the evening light and it is possible that it was at that time of day when someone expressed an idea that has become popular with the passage of time: “From O Incio to Rome will not find another church like it,” says, thus picking up the idea that that of San Pedro Fiz is the only roman church made of marble in Spain.

Its uniqueness was officially recognized 40 years ago when it was declared a national historical-artistic monument by the Ministry of Culture following the advice of the Royal Academy of Fine Arts of San Fernando. In that statement, no express mention was made of the marble with which it was built, but it was made of the history of the place and other outstanding architectural features such as the Compostela Romanesque style windows, its large semi-circular flared arch portal with four baquetón archivolts. , and the Maltese cross on the eardrum. That resolution also alluded to the fortress aspect of the temple and pointed out that due to its dimensions, monumentality and the abrupt ending of some columns, it was surely part of a project of larger proportions that, due to unforeseen circumstances, could not be completed.

For a little more than a decade, in the enclosure you can see a statue of Anxo González, who was the parish priest of the place for almost four decades, as well as the promoter of the work carried out in the 80s of the last century and that allowed not only to recover the temple but also to find some sculptural piece of great value.

For a few months, the Council of O Incio has launched a service of guided visits to the church that can be arranged going to the town hall or calling 982 427 014 and has also used a photograph of San Pedro Fiz as an image promotional in a campaign of diffusion through postcards.