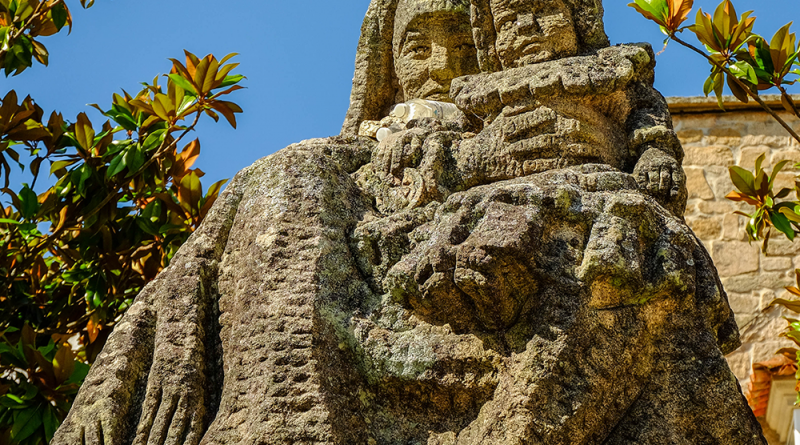 Hundreds of sculptures populate Galicia, to recall historical figures and events and to turn streets and squares into veritable open-air museums. They form an artistic catalogue that has been nourished by the talent of dozens of creators from very different periods and styles. Among all of them, Francisco Asorey stands out especially for the recognition he already had in his time and for the influence he had among his contemporaries and later creators. The artist, born in Cambados on 4 March 1889 and who died in Compostela in 1961 (his remains rest in the Pantheon of Illustrious Galicians), is considered to be one of the most important creators in the renewal of Spanish sculpture in the 20th century. In addition, he has left us an important artistic legacy that allows us to follow his mark over a large part of Galicia and to discover a good number of personalities.

Monuments to St. Francis and the Sacred Heart

The city where he spent a good part of his life houses several of Francisco Asorey’s works. The most visible and important is the monument to Saint Francis of Assisi on which the sculptor worked between 1925 and 1930 to commemorate the seventh centenary of the death of the Italian saint. The sculpture is located in front of the façade of the monastery that the saint himself had ordered to be built at the beginning of the 13th century in Compostela after his pilgrimage to the tomb of the Apostle. In addition, in the courtyard of the Compañía de María school there is a sculpture of the Sacred Heart of Jesus sculpted by Asorey in 1940.

Monuments to Loriga and Aller

There are two works by Asorey in the municipality of Lalín, although in this case, unlike the ones in Compostela, they are not religious creations, but two pieces designed to pay homage to two outstanding personalities of the capital of the Deza region. The first, dating from 1933, is dedicated to the aviator Joaquín Loriga, famous for being part of the Elcano Squadron that completed an aerial travel between Madrid and the Philippines in 1926 and for being one of the pioneers of aviation in Galicia. His neighbours had started a popular subscription to give him an aeroplane, but after his tragic death in a plane crash in Madrid they decided to use the money to erect a monument to him, which was commissioned to Asorey and inaugurated in 1933. At the end of the 1950s, the sculptor’s talent was again called upon from Lalín to immortalise in stone another illustrious Lalín native, the mathematician, priest and astronomer Ramón María Aller Ulloa.

The gestation of the imposing monument with which the city of A Coruña remembers the writer and journalist Manuel Curros Enríquez lasted almost three decades and was marked by various problems. The death of several important members of the Real Academia Galega (the entity promoting the tribute), doubts about the location of the monument, the fact that the first competition for ideas was not successful and the insufficient funds to undertake the project with which Asorey won the second competition were some of the obstacles that had to be overcome. It was finally inaugurated in 1934 in the gardens of Méndez Núñez, but the initial plan to deposit the ashes of Curros in a space provided for this purpose at the back of the building was never completed.

The sculpture with which those responsible for the monastery of San Julián de Samos wanted to commemorate the passing through the monastery of one of its most illustrious monks, Benito Jerónimo Feijóo y Montenegro, better known as Father Feijóo (1676-1764) and one of the most outstanding representatives of the Enlightenment, was also awaited. The project had begun in 1935, but had to be put on hold because of the Civil War and was not taken up again until the 1940s. Finally, the statue sculpted by Asorey and placed in the centre of the cloister named after Feijoo himself was unveiled in 1947.

The importance that the businessman and patron of the arts José García Barbón (1831-1909) had in Vigo can be seen in buildings such as the theatre that bears his name and the School of Arts and Crafts. And also in the monument with which the city wanted to show its gratitude a few years after his death to this emigrant who had prospered in Cuba and who, on his return to Galicia, after spending a few years in his native Verín, decided to settle permanently in Vigo. In this case, Asorey designed a large sculpture with the figure of García Barbón seated and the god Hermes presiding over the whole from above. The piece was inaugurated in 1927 by King Alfonso XIII in the avenue also dedicated to the patron of the arts and very close to the house he had lived in the city, but years later it was moved to a roundabout in Isaac Peral street. Another work by Asorey in Vigo is the sculpture dedicated to Eduardo Cabello, the engineer responsible for the works on the city’s port. This piece is located in the Bouzas area and was inaugurated only a year after the García Barbón sculpture.

Manuel Barreiro Cabanelas (1867-1950) is another emigrant who prospered in emigration (Brazil), was noted for his philanthropic works and was immortalised by Francisco Asorey. The important donations he made to the Provincial Hospital of Pontevedra, which allowed it to expand its services on several occasions, led the Provincial Council to promote the construction of a statue in the early 1940s, which has changed its location at least a couple of times, but without ever moving away from the hospital façade. It was originally located above a fountain, but this was removed during one of these changes of location.

Also related to medicine is the sculpture unveiled in Mondariz in 1925. Maximino Rodríguez Fornos was a doctor who died as a result of a fatal infection contracted during his intervention in a complicated childbirth. In homage to his dedication and by popular subscription, Asorey was commissioned to create a piece in which, next to the bust of the honoured man, there are figures that can be interpreted both as Greek gods and as the protagonists of the episode that caused the doctor’s death.

Mayor of Lugo for four different periods between 1905 and 1931, as well as being a lawyer and president of the Círculo de las Artes, Ángel López Pérez left an indelible mark on the city of the Wall to the point of being honorarily designated “perpetual mayor”. Once again, Asorey was the sculptor chosen to turn into art a tribute for posterity, which can still be seen in Rosalía de Castro Park. The sculpture, which includes a fountain and a pond, was unveiled in 1958, but plans for a neighbourhood tribute to Ángel López Pérez dated back to the early 1930s.

Statues for the Naval School

The Marín Naval Military School can boast of housing a total of four creations by Asorey. All of them were commissioned on the occasion of the transfer of the Navy’s study centre from Cádiz to Marín and its inauguration in 1943. By that date Asorey had already completed a stone sculpture dedicated to the Virgen del Carmen, patron saint of seafarers, and a bronze statue of Álvaro de Bazán, the famous 16th century admiral. In the following years they would be joined by busts dedicated to two other illustrious mariners: Isaac Peral and José Luis Díez.

Another of the statues that Asorey sculpted to pay homage to a philanthropist can be found in Cangas. The monument dedicated to José Félix Soage is dated 1924 and would have been placed a year before the inauguration of the market square paid for with the donations of this emigrant in Argentina. The piece consists of a bust of Soage and the image of a sailor holding an oar and is located in the gardens that also bear the name of the philanthropist.

Monument to Cabanillas and tributes to Asorey

The town where Asorey was born could not remain oblivious to the legacy of the sculptor. In its streets you can see the monument erected in memory of another illustrious neighbour of the town and to whom he was linked by a relationship of friendship and by various parallels in their careers: Ramón Cabanillas. The so-called “poet of the race” was honoured by the “sculptor of the race” with a piece made up of a large block of stone on a pedestal on which a bust of the writer can be seen. The work, located on the Paseo da Calzada, was inaugurated a year before the death of the sculptor, who shortly afterwards would be the recipient of his own tribute. In this case it was two of his disciples, José Cao Lata and Joaquín Gil Armada, who were in charge of shaping a piece inaugurated in 1965 in the square also dedicated to Asorey and in which, in addition to the bronze face of the sculptor, a replica of one of his most famous creations can be seen: A Naiciña.