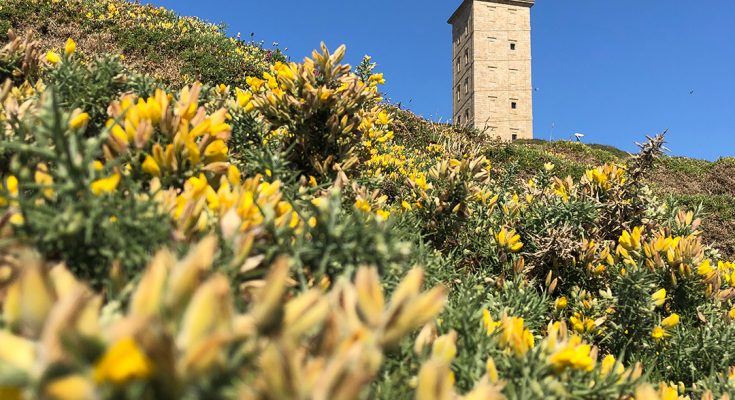 Well yes, in the end romanization also reached this corner of the world. And after many centuries, we can still visit places that remind us of the importance of his legacy.

The most Roman city in Galicia, in fact the first to be founded, is Lugo, at that time Lucus Augusti, which still “burns” every year at the end of spring in a combination of Roman and Celtic celebrations. Due to the importance it had at the time, it has many Roman remains, some visible, such as the wall, and others underground or peeking out. The star of the collection is the Wall of Lugo, declared a World Heritage Site in 2000. It is the best preserved on the peninsula. It has a perimeter of 2 km, and the width ranges from 4 to 7 m. It retains 71 towers and today it has 10 gates. The best thing is that we can enjoy it walking along the walkway, contemplating another perspective of the city. In Lugo the Romans also left us the baths, the house of mosaics, the bridge…

14 km from Lugo we can visit the remains of the Roman Temple of Santalla de Bóveda, in its time dedicated to the goddess Cibeles, a curious building with a space for taurobolio (ritual sacrifice of bulls). It has later additions, which for a long time were taken for Romans, which only give it more mystery and interest.

In A Coruña there is a Roman vestige that even appears on the coat of arms: the Tower of Hercules. It dates from the end of the 1st century, from the time of Trajan. It is the oldest Roman lighthouse still in operation in the world. It is true that it bears little resemblance to the primitive lighthouse, but it continues to light up there. In 2009 it was declared a World Heritage Site.

And how did the Romans get here, to the ends of the known world? Well, it turns out that, in addition to architecture, they were very good at engineering roads and bridges. They developed a network of roads, and bridges when a river squared them in the middle, throughout the empire, and Galicia was not going to be less. All roads led to Rome, and from Rome one reached everywhere. The most significant road, which can still be tracked, is the so-called Antonino number XVIII or Vía Nova, which linked Brácara with Astúrica. As it passes through the province of Ourense, we do not fail to see testimonies of Roman life, starting with the milestones, landmarks to measure distances, such as those of Portela de Home, in O Xurés.

Precisely in that area there are several deposits. In Lobios you can visit the remains of Aquis Originis, one of the eleven mansio, kind of inns, that were along the Via Nova. Why would they have chosen this site, near the Caldo River? Well, because of the thermal waters, surely, which in addition to being used for the baths, were used for the heating system of the mansio. The fact is that the Romans were great fans of the baths, and great professionals when it came to discovering ideal locations to live with all the comforts. They have left us memories in the thermal baths of Ourense, Lugo, Caldas…

Returning to the Vía Nova, 14 miles from Aquis Originis, in Os Baños, in Bande, we find the Aquis Querquennis camp, popularly known as A Cidá. If we want to soak up the theme, there we have the Aquae Querquennae-Vía Nova Interpretation Center. And, if you don’t want to get drenched in water, you have to be aware of the flooding of the As Cunchas reservoir before visiting it.

Between Aquis Origis and Aquis Querquennis, the Limia River was crossed by the Pedriña Bridge, which disappeared under the waters with the construction of the As Cunchas reservoir, the same one that sometimes floods the camp. A good Roman bridge that is still in use is the Bibei Bridge, made of granite, with three unequal spans and a set of milestones on one of the banks. Over the Arnoia crosses the O Freixo Bridge, with four arches. Today, it is part of a recreation area, with a bathing area and an old mill.

The passage of the Romans through Galicia also remains in the memory of the people, or in oblivion? An oblivion that is still remembered today, and even has a party in Xinzo de Limia, because the story happened in the Limia River. It seems that the legionnaires thought they were facing the Lethes, the river that erases memory (it must have been a very foggy day…), so they refused to cross it until Centurion Décimo Junio Bruto got up the courage and He crossed it and, from the other bank, he was calling the soldiers by name one by one, demonstrating that when crossing the river you could get wet, but not lose your memory.

In Sobrado dos Monxes, 5 km from the monastery, the remains of another camp appear, the largest in Galicia: A Ciadella. Strategically located between Lucus Augusti and Brigantium, it seems that it was in operation between the 2nd and 4th centuries to control communications and markets.

And we could continue with examples of the Roman legacy in Galicia, such as the villas (Toralla, San Tomé, Santa Marta de Lucenza, A Lanzada, Adrovello, Cambre…), the salt flats (O Seixal, Vigo…), or the castros (Fazouro, Viladonga…), since most of them continued to be used by the Romans after the conquest. And, of course, the archaeological museums of the four provinces have numerous remains of tools, ceramics, jewellery, etc., which bring us closer to Galician Romanisation. And there’s still a lot to dig…