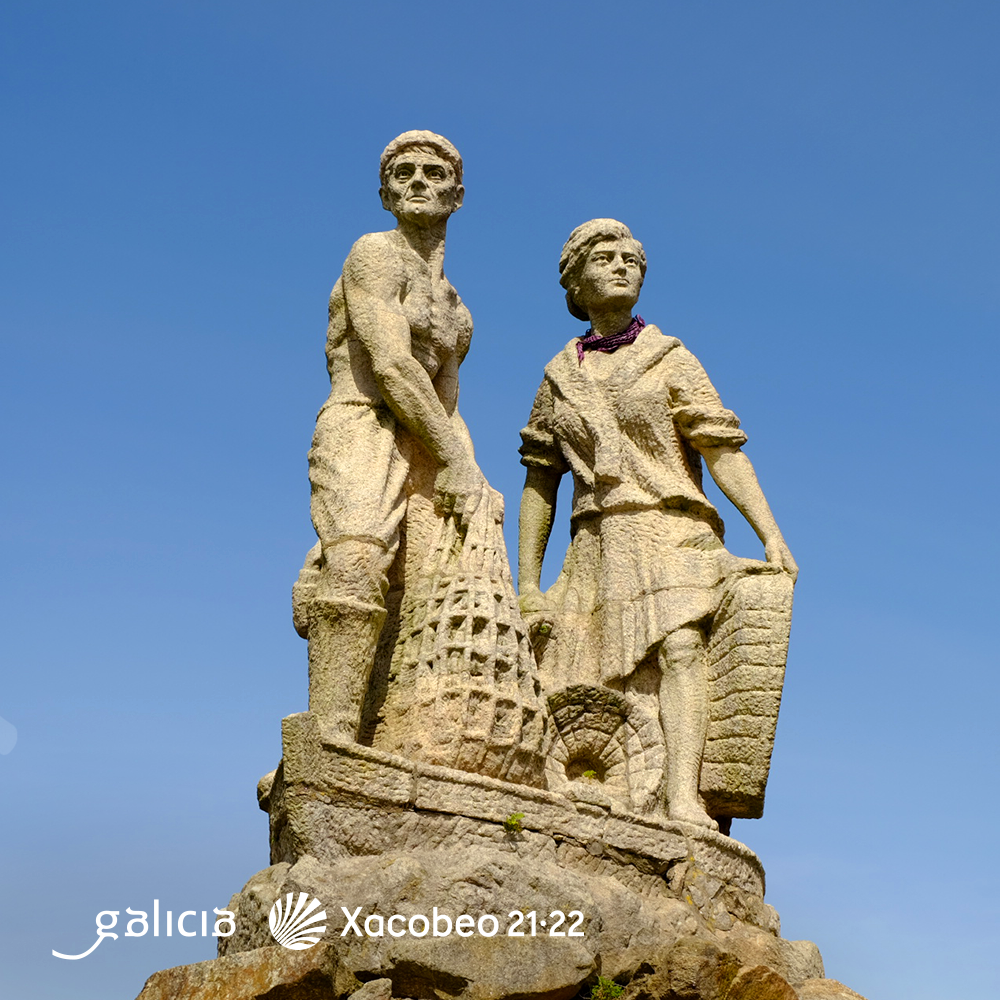 Galicia has looked to the sea since time immemorial as a source of work and prosperity, but also as the scene of events and tragedies that have marked the inhabitants of the towns and cities that live along the entire coastline. This close relationship has resulted in the artistic field in the proliferation of sculptural pieces located in prominent public places in these towns as a tribute to the men and women who work in the sea and as a memorial to those who lost their lives in its waters. We invite you to take a tour of Galicia to discover some of the most outstanding works.

There are two sculptures with which the town of A Guarda, located at the southern end of the Pontevedra coast, pays tribute to the people of the sea. In the vicinity of the town’s dock there has been a sculptural group dedicated to sailors for three decades in which José Antúnez Pousa not only represented a fisherman, but also women who carry out key activities for this sector, as is the case of the nets. A few years later, in 2004, Maxín Picallo was the creator who was in charge of shaping the pain for the loss of the sailors who died at sea with a piece that represents a woman afflicted by loneliness and uncertainty.

Also in the municipality of O Grove they have decided to pay homage to the people of the sea twice. In the municipal capital for half a century you can see the monument to the shellfish family sculpted by the artist Alfonso Vilar Lamelas. Located in the central Plaza do Corgo, it’s a local symbol and represents a man, a woman and a child aboard a “dorna”, a traditional fishing boat. And in San Vicente do Mar, occupying a prominent place next to the marina and facing the sea is the monument to the shellfish woman.

The memory of those who died at sea through the people they leave ashore is what “A Espera” represents. This piece, the work of the artist Iria Rodríguez, represents a woman with a young child in her arms, scanning the horizon in search of a loved one who will never return. The sculpture was placed a little over a decade ago in an emblematic place of this town on the Costa da Morte, Cape of Laxe.

Conde wanted to remember those who have disappeared at sea. His work, which recreates an older woman sitting in front of the sea, was placed a little more than three decades ago on the Muros promenade.

A traditional fishing instrument, the fisga, gives its name to the piece (O Fisgón) with which Moaña pays homage to the people of the sea while making a nod to Greco-Roman mythology. The sculpture, four meters high and almost 15 tons, was placed in a prominent place on the Moañés seafront in 2009 and is the work of the local artist Manuel Varela. Two decades earlier, Moaña already had another piece related to the world of the sea. The work by Maxín Picallo paid tribute to both sailors and migrants and can also be seen on the promenade, not far from O Fisgón.

In 1985, on the occasion of the celebration of the 75th anniversary of the founding of the Social Institute of the Navy, this institution inaugurated in Aguiño (Ribeira) a monument in homage to the people of the sea in which you can see two sailors collecting a net from his dorna. Much more recent is the sculpture erected in that same fishing village to recognize the work of the nets. It was inaugurated in July 2014 in the framework of the events of the Festa do Percebe and represents the traditional utensil used by nets to repair and prepare fishing gear.

A fisherman at the helm gives shape to the work that the local sculptor Manuel Quintas Vergara gave to all his neighbors in 2004 as a tribute to all the sailors and that presides over the entrance to the port. But this is not the only piece with which Baiona demonstrates its close relationship with the sea and navigation. Since the 1960s, a stone monolith with a carved caravel and a plaque commemorates the arrival of La Pinta in 1493 with the news of the arrival of Columbus on the other side of the Atlantic. Also the famous Virxe da Rocha designed by Antonio Palacios and installed on top of Mount Sansón in 1930 recalls that milestone in navigation.

The roundabout that gives access to the port of Portonovo, in the Pontevedra municipality of Sanxenxo, is presided over by a large bronze sculpture of a sailor made by Carlos Salas in 2007 to honor all the representatives of a key sector in the economy and local society. Also in Portonovo, but in the vicinity of Caneliñas beach there is a statue dedicated to the peixeiras that also gives its name to the viewpoint where it’s located. In this case it’s a work by Alfonso Vilar placed in 1994.

The sculpture erected in the Gardens of A Calzada de Cambados is also by Alfonso Vilar. Known as O Rañeiro for representing one of the shellfish men who are dedicated to this art of fishing, it was placed in 1968, but two decades ago it was replaced by a bronze replica with some modifications.

Shellfish farming is one of the main economic sectors in Arcade and women play the central role in this activity. Thus they were recognized with a tribute in the form of a sculpture located in the vicinity of the port. The piece was created by the sculptor Carlos Tesouro and inaugurated in April 2007, on the eve of the town’s famous Ostra Festival.

The residents of Vigo can boast of a large group of sculptural pieces that have the sea and its people as protagonists. Three of them are located in the O Berbés area: the Monumento ao Pescador, a new work by Alfonso Vilar originally placed in 1956 and which has since been changed several times; Ao mar, a piece by Xoán Piñeiro Nogueira located at the access to the port, and the Monument to the sailors killed at sea, inaugurated in 2006 in the Plaza del Puerto Pesquero and the work of Cándido Pazos. In the Gran Vía, since 1991 you can see a spectacular sculptural group, by Ramón Conde, generically dedicated to workers, but showing seven sailors pulling a net, hence the piece is popularly known as Los Rederos.

The year 1999 dates back to the placement in the port of O Vicedo of the monument to the sailor donated to the town by the professors of Fine Arts of the University of Salamanca Lorenzo González Sánchez and Jesús Casado Casado. The piece represents a sailor armed with various gear and can be seen at the access to the dock of said Lugo municipality.