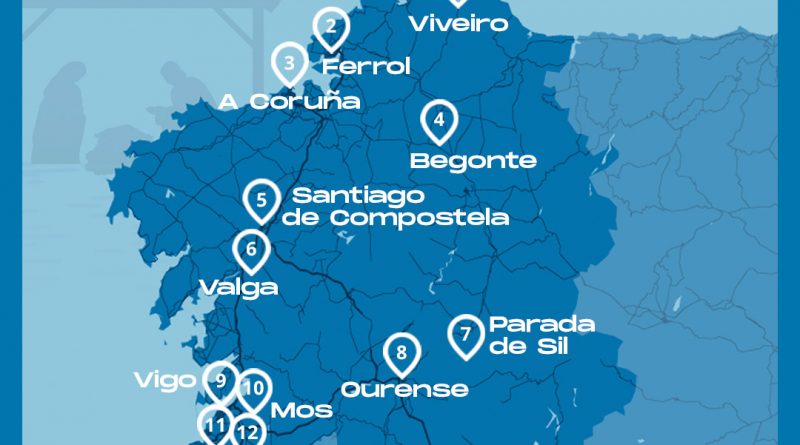 Whether or not we set up the nativity scene at home, in December and January, we can visit a few nativity scenes that bring us fully into Christmas. Although there are also living ones, we are going to focus on the traditional ones, with figures and decorations made by hand, some with mechanized parts and even special effects. The works are improving Christmas to Christmas thanks to the work of the nativity scene, who sometimes are a person and, other times, an entire town.

One of the most famous is the Nativity Scene of Begonte (December 5 – January 29), in the heart of Terra Chá. It is declared of Galician tourist interest. It was founded in 1972 by José Domínguez Guizán and José Rodríguez Varela. It is full of figures, many electronically animated, that represent from the most traditional biblical scene to the most popular chairega. Since its origin it has grown so much that the adjacent room is dedicated to the Nativity Scene Museum, with the animated figures and sets that are being renewed every year. In Begonte, the nativity scene is the undisputed protagonist of Christmas, and serves as an excuse to organize the festivities that, of course, begin with the Proclamation of the Nativity Scene. This year, on the occasion of the fiftieth anniversary, the traveling exhibition «50 years of the Begonte Nativity Scene» is being held.

Another nativity scene with the title of Galician tourist interest is the Artisan nativity scene in movement of Valga (December 5 – January 9). It has more than three thousand pieces. In addition to the biblical episodes, it represents scenes from the Valga area (pilgrimages, processions…), characters from the municipality and Galicia (La Bella Otero, Ferro Couselo, Rosalía, Castelao…) and current social issues, politics, etc. This means that every year there is a major renovation of figures and decorations.

Around this time, the old town of Viveiro is invaded by the giant Nativity Scene of Viveiro, also known as «Viveiro ante o Berce» (Viveiro in front of the cradle), or «Giant Nativity Scene of Santa María» (December 5 – January 13). Its main characteristic is the large scale, with a hundred life-size figures, with «cagón» and all, and that in the middle there are chickens, of flesh and blood, that animate the party. It is organized by the Association of Friends of the Old Town, in the old town, of course. And there is always news: this year a lighthouse almost eight meters high was incorporated, with the function of protecting the atrium transept. In the province of Lugo, the nativity scene tradition is also shown every year in the Lugo Nativity Scene Contest, in the Afundación building in the Plaza de Santa María de Lugo (December 17 – January 7).

In Santiago, we can visit the Nativity Scene of San Fiz de Solovio, in the church that gives it its name, (December 3 – January 5). Precisely, the Romanesque doorway of the church has a tympanum with the relief of the Adoration of the Magi, from 1316. The nativity scene has around five hundred pieces made by hand, made of clay and painted canvas. It is transferred and mounted year after year by José Uzal. It also includes lighting, sound and special effects (fog, thunder …).

A very peculiar nativity scene is the Nativity Scene of Baltar, in Ourense. It is made up of more than one hundred fired clay figures. Its main characteristic, in addition to the stamp of the sculptor, is that it has a deeply Ourensan air, with scenes in the square, in the tavern, with the old photographer… Arturo Baltar started it in 1967 at the request of the Association of nativity scenes. After a few years installed in the chapel of San Cosme and San Damián, in 2010, it moved to the annex building, to the so-called «Arturo Baltar exhibition space» and, since then, we don’t even have to wait for Christmas, because the nativity scene can be visited all year round, but between December 17 and January 6, with extended hours. By the way, ten minutes from here, at the bishopric headquarters, we can also go to the World Nativity Scene Exhibition, with more than one hundred and fifty nativity scenes from the places where the missions are present (December 10 – January 7).

Other nativity scenes in the province of Ourense are the Nativity Scene of A Viruca (December 8 – January 6), in Verín, which reflects typical areas of Verín and traditional work in the Monterrei area; and the Nativity Scene of Parada de Sil (November 20-January 30), made by José María Campo Herrero, with a scale reproduction of the Santa Cristina monastery and everything.

Another curious nativity scene is the Family nativity scene of Conxo (December 3 – January 9). The Otero family has been receiving visitors to appreciate their nativity scene for more than 75 years. Each edition is dedicated to a character, generally from the area. This year, it goes for the victims of the pandemic.

The Nativity Scene of the Third Order of Ferrol is also over seventy years old. It has a beautiful oriental-style nativity. It was started by Alfredo Martín, now deceased, and his family and other collaborators continue the work. In addition to all the scenography of the nativity scene, two page-boys narrate the scenes while the figures move. It can be visited from November 26.

There are nativity scenes that open later, such as the Nativity Scene of the Great Work of Atocha, in A Coruña (December 25 – January 6). It has the curiosity of being made to the scale of the map of Jerusalem. The backgrounds were painted by Camilo Díaz Baliño in 1923. In A Coruña it can also be seen the Municipal Nativity Scene since December 10, full of characters from the city.

In Vigo, although it seems that there are only lights, nativity scenes with a lot of tradition are also mounted. In the Casa das Artes the Monumental Nativity Scene of Vigo is exhibited (November 27 – January) and, on the other hand, the 56 Afundación Nativity Scene Contest (December 1 – January 8) is held, which are shown in the Exhibition Hall of the Afundación theater.

In the House of Culture of Gondomar, Fernando Fernández Penedo has been setting up the artisan Nativity Scene in motion (December 4 – January 9) for twenty years. It has more than six hundred pieces, one hundred and fifty in motion.

There is also a tradition in Mos, where the neighborhood group «Armouse o belén» makes the Nativity scene at the Pazo de Mos (December 1 – January 7). It is a solidarity exhibition because, to enter, you have to make a donation to the food bank. And nearby is the Herville Nativity Scene (December 5 – January 19), at the Herville Cultural and Social Association, with plenty of historical details.

If we go south and get to Tui, we must see the Nativity Scene of the Tui Cathedral (December 20 – January 10). In the retable of Expectation the nativity scene and, by all the naves, the Nativity scenes of the world are exposed.