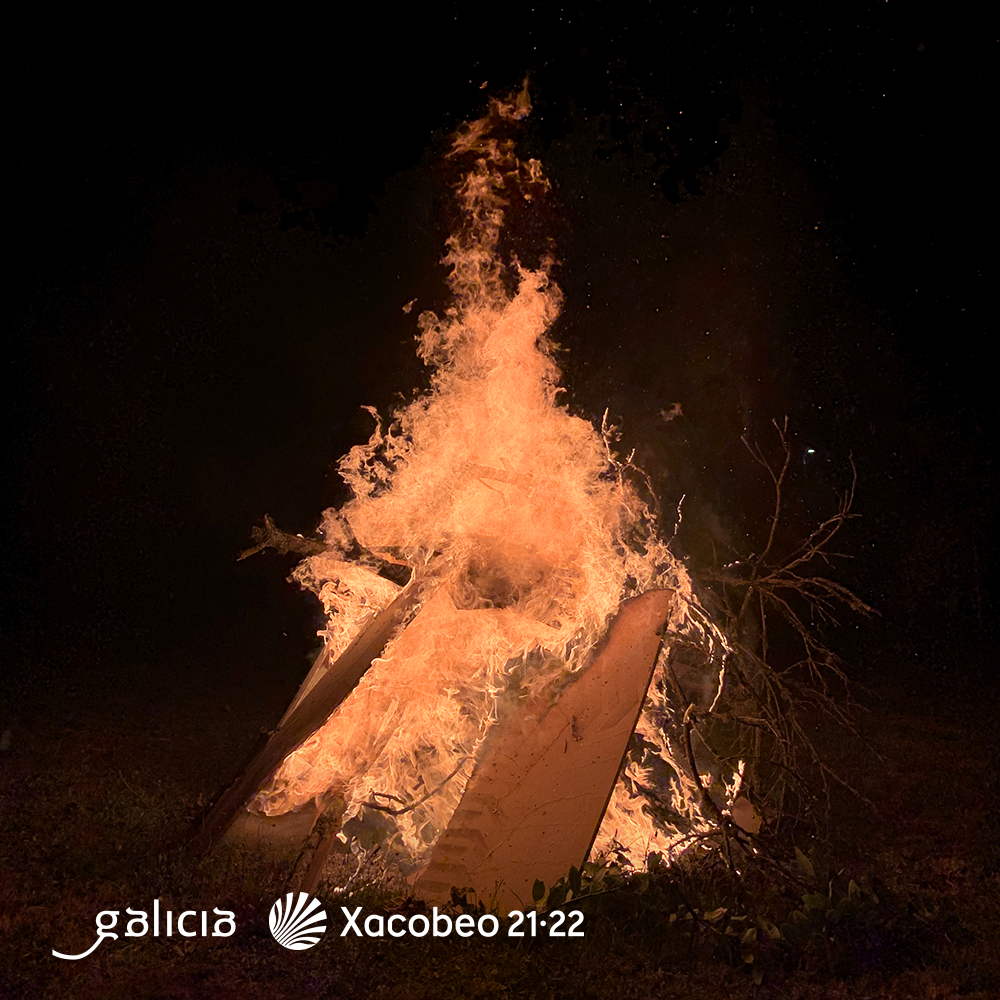 Galicia is a land of celebrations. Any reason is good to get together with family, friends and neighbors, and enjoy a day of partying. Whether it’s to honor the patron, to show off our gastronomy, to claim the quality of our products or the uniqueness of our crafts or to enjoy music, the annual calendar is full of dates marked in red. Some are specific to a town or city, others are cause for simultaneous celebration in dozens of places, and a few are equally enjoyed anywhere in the community. Among the latter, San Juan occupies a privileged place, since there is no corner of Galicia where, on the evening of June 23, a fire is not lit to join an evening full of tradition, symbolism and rituals. We share with you a small guide so that you fully enjoy the day.

Bonfires and their origin

Fire is the most important element of an evening that is directly related to the summer solstice, which takes place a couple of days before, and to the ancient sun cults associated with that time of year. It’s believed that the reason for lighting bonfires at that time had the symbolic function of bringing new strength to the sun and trying to avoid the change in trend that occurs on the summer solstice, date from which the hours of light and the night gain ground to the day. As with many other ancient pagan cults, the subsequent Christianization process postponed the celebration for a few days to link it with the commemoration of the birth of Saint John. According to Christian tradition, he was born six months before Christ and to celebrate it, his father, Zacarías, would have lit a bonfire. At present, this fire has acquired a purifying sense that leads us to the following aspect of the celebration:

The rite of fire

The process by which the flames consume matter turning it into ashes and smoke has had a purifying meaning since ancient times, but to benefit from these effects during San Juan it’s not necessary to burn, but it’s enough to jump the bonfire from side to side. other. According to tradition, this ritual allows you to leave evil spirits behind and benefit from protection and good luck in the face of adversity. It’s a practice that cannot be missed in any celebration of San Juan, although the details do vary from one place to another.

In some areas of Galicia it’s said that the bonfire must be passed a total of nine times for the rite to be accomplished; in others there are 7 jumps to be made and in some cases it’s simply an odd number. What there is agreement on is that it’s a rite for everyone, children and adults, that is why it’s common for some embers to be removed from large bonfires to allow the little ones to also participate in the ritual. It’s also for this reason that although bonfires are normally lit at midnight from June 23 to 24, in some places the appearance of fire is also anticipated to facilitate participation.

The herbs of San Juan

Although fire is the central ingredient of San Juan, in the section on rites for this day there is also room for other natural elements. The origin of the tradition of the herbs of San Juan is also lost in time and there is also no unanimous consensus on which flowers to use in this rite. It’s the peculiarities of each area in terms of flora, and the way in which the tradition was transmitted in each place or, even, in the family environment, which have led to the fact that when listing the herbs of San Juan there are a large variety of different listings.

Along with the species that bears the saint’s name, there are other varieties such as lemon verbena, male fern, mallow, fennel, rosemary, broom, pennyroyal, rue and arnica, as well as leaves from various trees. fruit trees. Some specialists have identified more than fifty different species, although always combined in a small number that, in many cases, is 7. There’s also no single way to follow the ritual, but the most common is to submerge the selected herbs in a container with water on the afternoon of the 23rd, leave them there overnight, use that water to wash your face the next day, let the herbs dry and store them to burn the following year. It’s thus achieved, according to tradition, to get rid of the evil eye and envy, in addition to benefiting from the properties that some of these plants have against skin ailments.

In a night of partying, the gastronomic component cannot be missing and San Juan isn’t an exception in this regard, but in this case there is a dish common to all of Galicia. Sardines cannot be absent next to any bonfire and their aroma is another of the fundamental ingredients of the evening. Preferably roasted and presented on a piece of bread (preferably corn), the sardines allow the participants in the party to satisfy their appetite and gain strength for the long evening that awaits them.

“For San Juan the sardine dips the bread” is a saying already elevated to the category of commandment, arriving on the evening of June 23, although it’s true that not all palates appreciate the forcefulness of this gastronomic proposal and normally the menu of the evening is accompanied by other alternatives. Furthermore, in this case it’s not as old a practice as it might seem. A century ago, the menu for San Juan’s night varied notably from one town to another, including all kinds of food, and it was in subsequent decades that the custom of roasting sardines, possibly born in fishing towns, spread throughout Galicia.