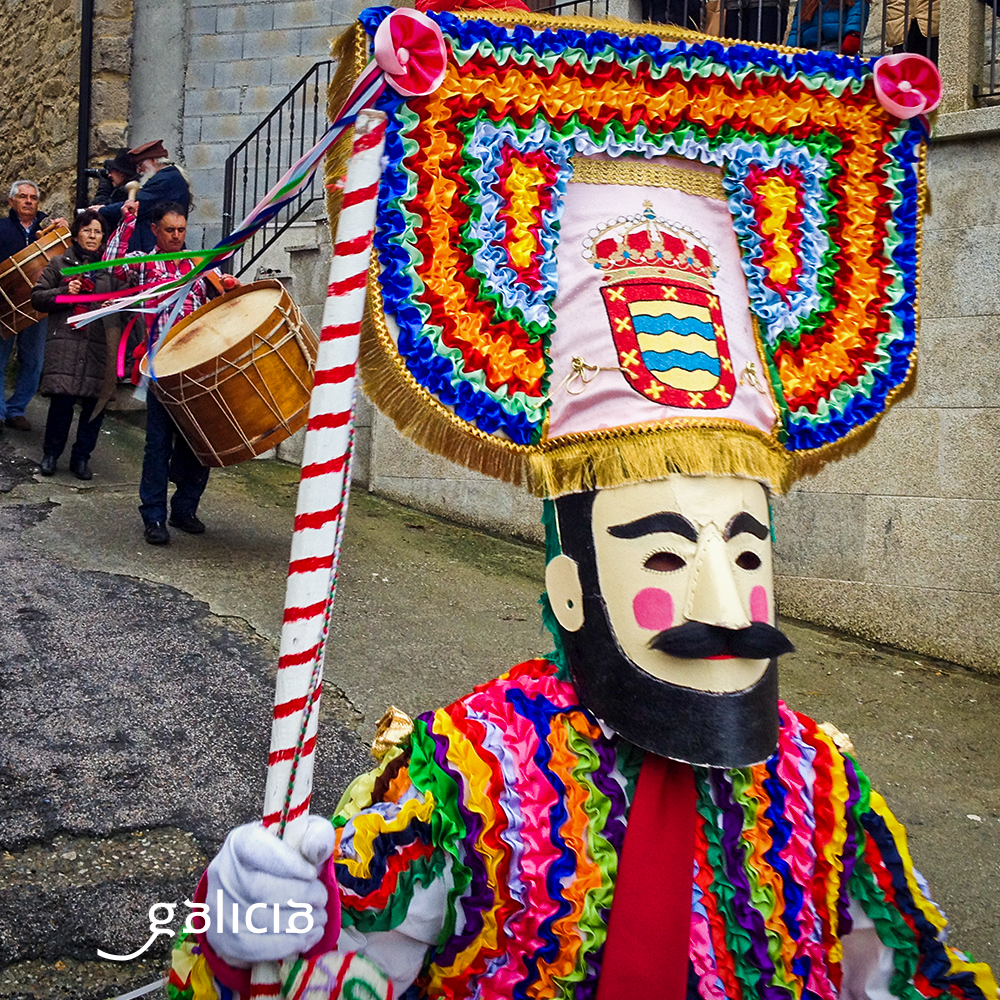 The preparations have come to an end and it is time to surrender to the enjoyment of the most irreverent party of the year: the Entroido (Carnival). In some locations the first events began already in the past, but it will be during this week when the festive atmosphere extends throughout Galicia following the wake of the main celebrations. Nine are the appointments that stand out in the Galician calendar for having been declared of tourist interest. Here we tell you the main acts of their respective programs and the aspects that make each of them a special celebration.

The one that claims to be the longest Entroido in Europe has on this occasion a new motive to be proud of: its declaration as a festival of international tourist interest. Gone are days like Saturday of Petardazo and Domingo Fareleiro, the Hanging of the Meco and Saturday and Sunday Corredoiro, but the best is yet to come.

The character: The Pantalla is the central character of Xinzo’s entroido. Its origin dates back to the “castrexa” era and symbolizes authority and order at the party. Hundreds of them can come together and with the sound of bells and inflated bladders they carry set the pace of the celebration.

The day you should not miss: For the second consecutive year, the spectacular parade of Comparsas and Carrozas will be held on Piñata Sunday (March 1). It will be the perfect culmination for the party.

Two weeks full of party is what the Entroido of Verín offers to anyone who wants to approach this town of Ourense. And each day has its own meaning: Thursday of Compadres, Domingo Corredoiro, Thursday of Comadres… until the appearance of the characters that personalize the celebration: the Cigarrón.

The character: Legend has it that the origin of the Cigarrón is a tax collector and that is why it was not long ago, in carnival, that they asked for money, a fact that even originated a very popular couplet. His mask, crowned with a hand-decorated miter, the jackets, the whips and the cowbells that they wear at the waist are some of the most striking elements of his unmistakable outfit.

The day you should not miss: Women are the protagonists of one of the central events of the entroido of Verín, that of the Xoves de Comadres, which this year is celebrated on the 20th.

Considered one of the oldest in the world, the entroido of Laza keeps its main rites invariable and invites to actively join anyone who wants to know it. Of course, they recommend not spending much on costumes or clothes because this is a celebrations not suitable for those who do not like to stain themselves, such as the pitched battle with dirty rags on Monday of Entroido.

The character: The Peliqueiro is the king of the Entroido of Laza. His dress is similar to that of the Cigarrón, since it covers his face with a mask crowned with a miter decorated with colorful motifs and white shirt holder, red sash, jacket, white socks and suspenders, cowbells and the whip known as zamarra. The public can not touch or stain the Peliqueiro, but can make it an object of their mockery.

The day you should not miss: The Luns Borralleiro is one of the central days of the celebration in Laza. The morning animation of the Farrapada, the Maragatos and the Xitanada dos Burros will continue in the afternoon with the Baixada da Morena (a cow-shaped mask), the donkeys, the ants, the gorses and the cobelleiros.

Under the cover of the San Mamede mountain range, an entroido has developed whose central character is related to other nearby celebrations, but which also presents its own peculiarities. The party extends during these days throughout the municipality thanks to the Felos who thus carry their anarchic and rebellious spirit even the last village.

The character: The Felo are related to the Peliqueiros and the Cigarróns and, like them, is a character that represents the authority at the party. Born in the Serra de San Mamede (the animals of the area decorate their masks) during the entroido visit all the villages in the area and with the sound of their cowbells drive away the wolves.

The day you should not miss: Before arriving at the center of Maceda, the Felos will fulfill the tradition of touring the villages taking the party to all corners of the municipality. On Saturday 22 will begin this trip accompanying in his descent to the Marela.

The Entroido in Vilariño de Conso is enjoyed with the five senses, since even the palate has an important weight in the celebration. In addition to the original characters, a proposal that will delight the most carnivorous is added to the program of activities.

– The character: The Boteiro is the star character of the Entroido of Vilariño de Conso and is also responsible for directing the Fulión, a group of people who fill the streets with the sound of their drums, their scythes and their hoes.

The day you should not miss: The Festa do Cabrito has been held in Viana do Bolo since 31 years ago, although this year comes with an important novelty. It will be held a day before and will coincide with the Saturday of Entroido, day 22. Attendees, in addition to tasting the star dish, will see the Fulion parade and the exhibition of drums.

Also in Viana do Bolo carnival and gastronomy go hand in hand at this time of year. Its Entroido extends throughout the municipality and the neighbors organize themselves to take the party in the form of Folión from one place to another, thus keeping alive this celebration that is among the oldest and most authentic of Galicia.

– The character: Boteiros and Foliones are the great protagonists of the Entroido of Viana do Bolo. The former open the way to the latter and they keep the public under control making big leaps with the help of a colorful rod called monca.

– The day you should not miss: Day 23 will be the Fat Sunday in Viana do Bolo and the program does justice to that denomination. This is the big day because, in addition to the proclamation and the parades of folions, the Festa da Androlla will be held, which will allow attendees to taste this traditional sausage.

Although the traditional entroido is usually associated with the towns of the interior of Ourense, the parish of Cobres (in Vilaboa, Pontevedra) celebrates a festival of secular roots and unmistakable staging. The events are concentrated in just four days, but the participation of the neighbors is total and, unlike most celebrations, in Cobres there are no masks to hide behind.

– The character: In Cobres the entroido is a celebration full of music and gallantry whose main exponents are the Madamas and the Galáns. These characters wear beautiful clothes and interpret traditional dances.

The day you should not miss: On Tuesday of Entroido, the main day of the entroido de Cobres is celebrated with the dances by the Madamas and the Galáns and a series of popular games among which the Corrida do Galo stands out.

Some of the municipalities of the natural region that bathe the waters of the Ulla River share a unique tradition of Entroido: the Xenerais da Ulla. From the beginning of February until the first days of March, these characters travel through parishes of A Estrada, Boqueixón, Santiago de Compostela, Silleda, Teo, Touro, Vedra and Vila de Cruces, starring in each stop a dialectical confrontation (“atranque”) in which they remember in satire key some events of the last twelve months.

The character: the Xenerais, dressed in nineteenth-century reminiscences uniforms, head a large army of which the Correos and the Abandeirados are also part, among other characters. The origin of this tradition is linked to the military confrontations that occurred in the area in the 19th century and related to the French invasion, the Carlist wars and the uprising of Solís (the Battle of Cacheiras).

The day you should not miss: The Xenerais will visit Lestedo (Boqueixón) on March 1st to join the Festa da Filloa, so it can be the best occasion to enjoy their ironic couplets while tasting one of the most traditional desserts of this time of year.

The geographical situation of Manzaneda, in the middle of the mountain, has contributed to the preservation of an entroido that differs in many aspects from the carnival of the neighboring municipalities, but that shares with them the spirit of collective and irreverent celebration.

– The character: La Mázcara, unlike other characters of the entroido and despite his name (simillar to the mask), does not have his face covered. He carry on a small drawer and goes up himself to show their skills for dancing, accompanies the troupes (here called fuliones) and participates in the foliadas (satirical representations).

The day you should not miss: The Entroido of Manzaneda says goodbye in a big way on Tuesday 25th with the parade of the different “fuliadas” through the streets of the town and a popular meal.

Here finishes the summary of these celebrations that have much more to offer. If you want to know all the details you can do it here