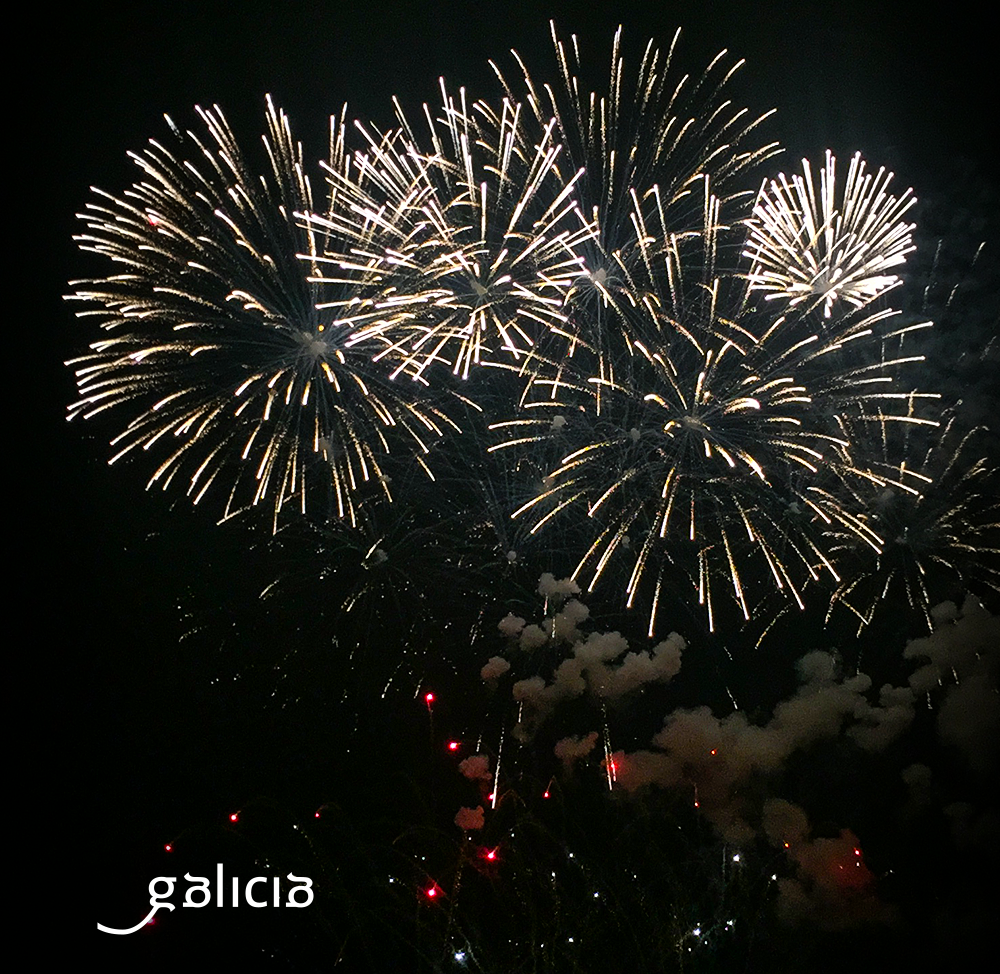 The start of August is synonymous of celebration in Galicia. Musical, gastronomic, historical and ethnographic celebrations coincide on the calendar to fill localities throughout the community with colour and joy. Neighbors and visitors merge in a celebration with decades of life, but this year have also suffered the consequences of the crisis of the covid causing that most of them have had to cancel their main events or be postponed to 2021. From here we want to pay our particular tribute by reminding you of the celebrations of tourist interest with which Galicia welcomes this month.

Considered the oldest wine celebration in Galicia and the second oldest in Spain, the Festa do Albariño has been considered a festival of international tourist interest since 2018. It is a popular event that has the wine as protagonist and that causes that the streets of Cambados are full of people tasting its famous wines and enjoying the party. Thousands of people gather every year in the town to participate in its festivals and concerts, although on this occasion most of the celebrations that should have taken place during the first weekend of August have been suspended.

Since 1989, the Association of Friends of Tortilla de Laro has been celebrating one of the most popular festivals in the Deza region, which has been declared of tourist interest in 2013. Thousands of people gather to taste the tortillas prepared by the restaurants and the members of the association of housewives. The opening speech, the tasting, the competitions and the performances of groups and orchestras are some of the ingredients of a celebration planned for the period from 31 July to 2 August, but which has been postponed until next year.

Declared of tourist interest only a few months ago, this unique celebration, also known as the Romaría dos Cadaleitos, will have to wait until 2021 to celebrate as it deserves its new consideration. The procession of coffins with living people inside trying to obtain the favour of the Virgin or to show her gratitude for a fulfilled petition is the most original element of a celebration whose religious section gives way later to a great picnic.

This year, in spite of the situation, A Arnoia has decided to continue with its traditional Festa do Pemento, but adapting it to avoid risks and crowds. The festival was born in 1980 and is dedicated to the product par excellence of the garden of this municipality of Ourense and will be held from July 31 to August 2. Normally, it coincides with the patron saint’s celebrations and brings together a large number of people, who can enjoy cultural and sporting events, as well as religious, official and protocolary acts. This year you can only taste the peppers in the bars of the municipality and for this you will have to buy some tickets through the link: https://pementosdearnoia.com/.

Officially called Feira e Festa da Música e da Arte, the Pardiñas Festival has been organised since 1980 by the cultural association Os Xermolos with the aim of preserving and disseminating Galician culture. This year the association decided to present a renewed format adapting to the new security measures. Initiatives will be carried out during the weekends of August in different places of the town. The events will begin on August 1st in Campo da Feira de Parga with the 27th Mostra de Instrumentos de Música Tradicional organized by the Asociación do Baile e a Música de Tradición Galega. They will conclude on August 30th with musical activities in the parishes of O Vilar and Santa Locaia. The programme includes small concerts, film projections, book presentations and different workshops.

The first weekend of August is synonymous with traditional music in Zas. Since 1984, the association Castro Meda organizes this folk festival through which the main groups and artists of the Galician and international scene have passed along the years. The music is the great protagonist of this event, but the program of activities has grown over the years, complemented by other cultural proposals. In addition, the venue itself, the oak grove that gives it its name, is another attraction of the festival and helps to create the special atmosphere that is breathed there. This year, music will not be played at Zas, but its organizers promise to return with renewed energy in 2021.

Also known as A Xira, the Día da Gaita and Romería a Santa Cruz, is a traditional celebration that takes place every first Sunday of August on the hill of Santa Cruz. Gastronomy and popular music are two of the main ingredients of a festival that has been celebrated in its current format since the 1960s, but whose origins go back even further in time. Its multitudinous character is, precisely, what has encouraged its organizers, the heads of the Asociación Amigos da Gaita Galega, to suspend this year’s edition to avoid crowds.

Traditional craftsmanship is the main sign of identity of the village of Buño, in the municipality of Malpica, A Coruña. Every year, at the beginning of August, its craftsmen celebrate a Mostra da Olería that attracts visitors and tourists from all over Galicia. The stalls coexist in the program with workshops of mud and other informative activities destined to put in value this millennial craft. This year’s edition had to be cancelled, but the obradoiros and the shops of the town, as well as the Ecomuseo Forno do Forte, are still open to receive all those who want to know the singular olería of Buño.

Every first Sunday in August the inhabitants of Catoira and thousands of people gather in this town on the banks of the Ulla River to enjoy one of the most popular celebrations in the Galician summer calendar. Since the 1960s, they have been recreating the capture of the Torres del Oeste (Western Towers) with the help of a replica of a Viking boat. The invaders quench their warrior thirst with wine and a convivial meal takes over from this playful battle through mud. The enormous convening power of the festival is what has forced the suspension of the central events of the celebration this year, although some activities have been organized for smaller audiences.

The pilgrimage of San Fins do Castro is celebrated every August 1st gathering the faithful and the curious in the carballeira located next to the chapel of the same name. The Berro Seco (an original choreography of shouts directed by the local parish priest), the hymn of San Fins and the burning of the Santo da Pólvora are the most original and emblematic elements of this celebration in which other rites typical of religious pilgrimages are also present, such as the one related to the miraculous power of the waters of the nearby fountain. As with other similar pilgrimages, we will have to wait until next year to take part in it.

Another of the traditional celebrations that has fallen off the festive calendar this year is the one that has been held in the parish of San Miguel de Reinante (municipality of Barreiros) since 1980 to pay tribute to the emigrants with music. The association O Arco da Vella is responsible for the fact that the Festival Folclórico Internacional do Emigrante has been able to bring together a multitude of groups from all over the world over these 40 years.

A festival of national tourist interest, since 1983, the Feira do Bonito has been held in Burela on the first Saturday in August. The main objective of the festival is to claim the seafaring history of the village as well as its culture and gastronomy. Each of its editions offers entertainment and musical performances with relevant Galician artists, but the star of the day is the delicious tuna prepared in different preparations and even gluten-free for celiacs. This year there will be no official events.

Like some of the previous ones, this celebration takes place on the first Saturday of August. On that day, the parish of Herbón, in Padrón, boasts of the peppers to which it has given international fame with a celebration that was already declared of tourist interest in 1978. The Order of the Pepper of Herbón awards the titles of Knights and Ladies to producers and personalities who spread and promote the pepper. The organizers of the festival have decided to suspend the events of this year, but they call on the public to meet again in 2021.

Also in the municipality of Oímbra, in Ourense, they pay homage to the peppers with a monographic celebration. The one dedicated to its white pepper goes back to 1997 and consists of a popular meal that takes place in the carballeira of the town the first Sunday of the month of August and that is seasoned with contests, exhibitors of sale, performances and inflatables. The city council has cancelled the acts of this year, but it will make promotional campaigns to stimulate the sale of this popular product.

Since 1999, the municipality of O Pino in A Coruña has celebrated the Festa do Galo Piñeiro and a Mostra Cabalar to exalt Galician gastronomy and culture, as well as recovering a species of rooster with roots that go back to Celtic times. The programme includes a fair where live animals are sold and competitions where the best specimens are awarded. The Mostra Cabalar brings together the best horses and mares of Galician and foreign breeds and allows the public to enjoy equestrian shows and dressage exhibitions. Since 2009 a Celtic Fair is also held, but this year all the activities have had to be suspended so we will have to wait until 2021 to enjoy these popular celebrations of O Pino again.