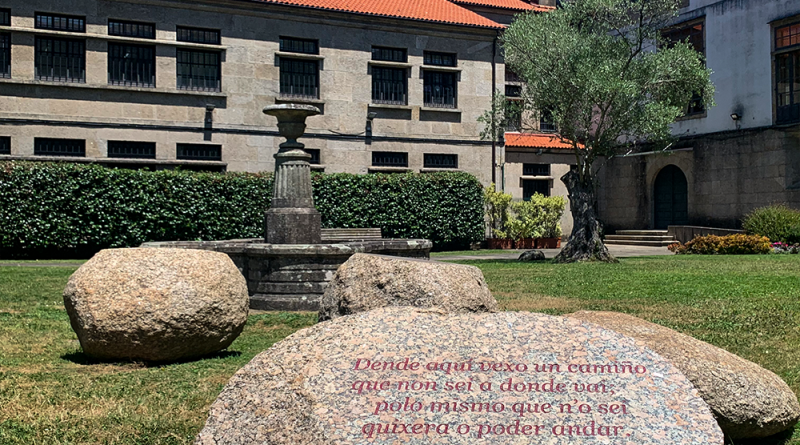 Without Category
17 March, 2021 Turismo de Galicia 0 Comments Antonio Noriega Varela, Eduardo Pondal, Johan de Cangas, Luz Pozo Garza, Manuel Antonio, Manuel María, Meendinho and Martin Codax, Ramón Cabanillas, Rosalía de Castro, The Bard of Bergantiños, The great poetess of Galicia, The poet of A Terra Chá, The poet of O Courel, The poet of the mountain, The poet of the race... and of Samos, The poet of the sea, The poetess of Ribadeo, The troubadours of the Vigo estuary, Uxío Novoneyra

There are countless ways to explore Galicia: through its villages, its history, its traditions, its gastronomy, its rivers, its mountains, its heritage… and even its poetry. The verses also allow us to see the beauty of this land, since some of our most illustrious authors identify unequivocally with the landscapes to which they sang.

The poet of the mountain

The landscapes of his native Mondoñedo and other municipalities in Lugo, such as Abadín, inspired the verses of Antonio Noriega Varela (1869-1947), making him known as the Poet of the Mountains. In fact, his first work was entitled “Montañeses” (Highlanders), although in later and expanded editions it would be called “D’o ermo”. In his poems we can see the influence of the links he maintained for much of his life with the agrarian movement, in such a way that images of peasant life are intermingled with evocations of the landscape and nature. He was honoured in 1969 with the Día das Letras Galegas (Day of Galician Letters).

The great poetess of Galicia

Considered a key figure in Galician culture, Rosalía de Castro (1837-1885) stands out for having played a fundamental role in the recovery of the prestige of the Galician language and for combining this with the indisputable quality of her literary creations. Traditionally associated with romanticism for her more intimate compositions, in her verses there is also room for vindication and social denunciation, as well as for recreating herself in many of the places where she spent various moments of her life and which marked her deeply. The sanctuary of the Virxe da Barca, in Muxía; the church of Saint Julian de Bastavales, in Brión, and the cathedral and other places in Santiago de Compostela are some of the places that pass through the verses of the great Galician poetess, an author who also inaugurated the celebration of the Day of Galician Letters in 1963.

The poet of A Terra Chá

Manuel María (1929-2004) developed prolifically and brilliantly in the most diverse literary genres (essay, narrative, theatre…) addressing numerous themes and always showing a combative and committed character. But it was in the field of poetry where the work of this author, honoured in 2016 with the the Day of Galician Letters, reached its peak. After a first stage characterised by an intimate poetry, María inaugurated with “Terra Chá” a period in which her verses are focused on the landscapes of the region of Lugo. The influence of Noriega Varela is key in this new orientation and, just as the author of “D’o Ermo” is known as the poet of the Mountains, Manuel María came to be known as the poet of Terra Chá.

no que andan as aves a voar.

The poet of the sea

His premature death, when he was only 30 years old due to tuberculosis, and his scarce literary production (little more than a hundred poems) have not prevented Manuel Antonio (1900-1930) from being considered one of the main representatives of the poetic avant-garde in Galicia, a fact that was also key to his being honoured in 1979 with the Day of Galician Letters. He only published one collection of poems during his lifetime, “De catro a catro. Folla sin data d’un diario d’abordo”, written during his training as a merchant navy pilot on board the Constantino Candeira in 1926 and 1927, but the importance of the work and the central theme that inspires it are some of the reasons why Manuel Antonio is often cited as the poet of the sea.

The poet of O Courel

Born in the heart of the Courel, very close to the Devesa da Rogueira, Uxío Novoneyra (1930-1999) never lost sight of his native land, to which he returned time and again after the various periods in which he lived in cities such as Madrid, Lugo and Santiago. Those landscapes inspired much of his poetic production, as can be seen in the two volumes of “Os Eidos” and in “Elexías do Courel e outros poemas”. He maintained a close friendship with other poets such as Manuel María and María Mariño and was honoured with the Day of Galician Letters in 2010. The intense activity he developed during part of his life bringing poetry to schools and social entities made Novoneyra well known not only for his poems, but also for the way he gave voice to his own verses as well as to those of other authors.

The poetess of Ribadeo

Luz Pozo Garza (1922-2020) herself said so on more than one occasion: Ribadeo, the town where she was born and where she spent the first years of her childhood, marked her deeply and was always very present in her poetic production. The memories of her childhood there can be seen in a fundamental work of contemporary Galician poetry, such as “Códice Calixtino”, and reach their maximum expression in the volume “Ribadeo, Ribadeo”.

The poet of the race… and of Samos

The political commitment to Galicianism of Ramón Cabanillas (1876-1959) and the way he expressed it in his literary work made him the voice of the Irmandades da Fala and earned him the nickname of “poet of the race”. But in the work of the author from Cambados there was also room for more intimate verses and for recreating himself in some of the places he travelled throughout his life. This is the case of “Samos”, a collection of poems in which he expressed in lyrical form the time and experiences accumulated during the stays that the author, remembered on the Day of Galician Letters in 1976, spent in that Benedictine monastery that gives its name to this work.

The Bard of Bergantiños

The landscapes and places of the region of Bergantiños, where Eduardo Pondal (1835-1917) was born and spent a good part of his life, are of special importance in the work of the author who, together with Rosalía de Castro and Curros Enríquez, forms the trio of great poets of the Galician cultural revival. Pondal, to whom the Day of Galician Letters of 1965 was dedicated, made his native Ponteceso as well as other neighbouring municipalities parade through his verses. Sometimes he turned the names of certain places into a source of inspiration for the mythical characters in his poems and in other cases he recreated memories through natural landscapes and monuments.

The troubadours of the Vigo estuary

Although very little is known about these three troubadours and very little of their poetry has survived to the present day, their role in Galician literature is crucial (as they were recognised in 1998) as representatives of the importance that the Galician-Portuguese language played in the Middle Ages as a form of cultural expression. In all three cases we can appreciate in their cantigas de amigo (compositions in which a lover shows her grief for the absence of her beloved) recognisable landscapes of the Vigo estuary and its surroundings, such as the city itself, in the case of Martín Codax; the hermitage of San Mamede (Bueu), in the three cantigas of Johan de Cangas, and the island of San Simón, where Meendinho places the beloved who gives voice to his verses.

cercaron-mi as ondas grandes do mar.