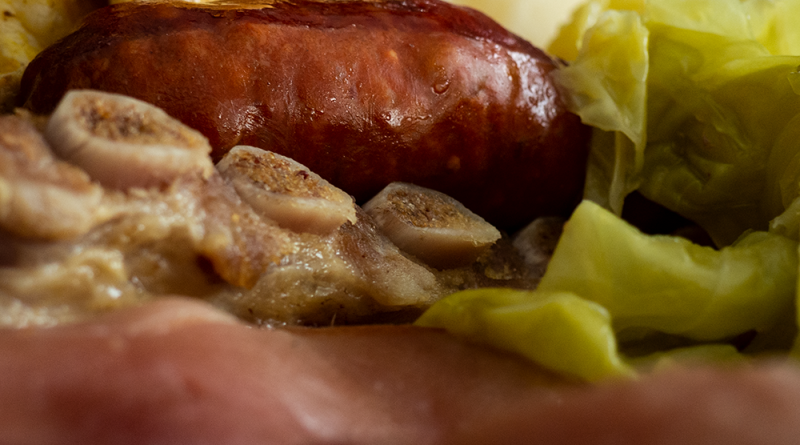 The covid has left us without the entroido (carnival) celebrations. These multitudinous and carefree festivities that are spread throughout Galicia and that reach their highest levels of originality in the municipalities of the so-called magical triangle of Ourense and in other locations throughout the community will have to wait until 2022. But from here we suggest you alternatives so that you can at least enjoy them from your home. The entroido, as well as traditional costumes, ancestral rites and days of irreverence and fun, is also gastronomy. Several Galician dishes and desserts are directly linked to this time of the year and to many of these celebrations that have been declared of tourist interest due to their originality and uniqueness. Would you like to discover and prepare them?

Hearty and tasty like no other, te stew is the star dish at this time of year in many homes in Galicia. The great Álvaro Cunqueiro said decades ago: “Despite all the culinary advances and the changes of the times, a cocido is the dish that honours the Galician people on the great festivals of the patron saints, and in family celebrations”. And so it continues to be in these times of entroido. If there is one place where this dish plays a starring role in their recipes book, it is undoubtedly the municipality of Lalín (Ponteveda), where for more than half a century they have been enjoying a monographic festival on the Sunday before Entroido Sunday that has continued to grow over the years. In 2021 they should debut their new status as a celebration of international tourist interest and they hope to do so with a change of dates that will move the big day of the festival from February 7th to May 16th. But it is also possible to enjoy this dish at home, which brings together some of the most prized ingredients of the Galician rural world: the best meats and the best garden produce. It does, however, require time and patience to follow the steps involved in desalting and cooking the different ingredients.

Although traditionally considered the little brother of cocido, lacón con grelos is a dish with its own personality that boasts in its very name two of Galicia’s best products, both of which are recognised with protected geographical indications. The pork forelimbs and the leaves and stalks of the turnip harvested during the plant’s vegetative period are the main ingredients of this recipe, which has also earned its own celebration coinciding with the entroido and declared to be of tourist interest. This is the Festa do Lacón con Grelos de Cuntis, which traditionally takes place seven days after Entroido Sunday.

Botelo (or butelo) and androlla are two sausages derived from pork typical of some areas of Ourense and Lugo that also occupy a central role in the gastronomic offer coinciding with this festive time of the year. In both cases, the rib is the main ingredient, although the quantities vary: in the case of ‘botelo’ it is at least 70 % and in the case of ‘androlla’ it must not be less than 90 %. The two are supplemented by other cuts which are suitably marinated and stuffed into casings to be cured and smoked. They are also distinguished by their shape, since the ‘botelo’ is short and thick, while the ‘androlla’ is more elongated, and in both cases they must be cooked before consumption and are usually presented with potatoes, chorizo and cabbage or turnip greens. This is the case of the Festa do Botelo in O Barco de Valdeorras and the Festa da Androlla in Viana do Bolo, celebrations declared to be of tourist interest, as is the Feira do Butelo in A Fonsagrada. In the case of Viana do Bolo and A Fonsagrada, these festivities are directly related to the entroido, since the Feira do Butelo is held the weekend before the Saturday of entroido and the Festa da Androlla takes place on the Sunday of entroido, known there as Domingo Gordo (Fat Sunday).

More information about botelo and the androlla.

Filloas are one of the desserts that fight for the kingdom at this time of year, although there is no uniform way to prepare and consume them. There are areas of Galicia where you do not wait until the end of the meal to taste them, but they are served as an accompaniment to the cocido. As a dessert, filloas can be served with various accompaniments, such as honey or cream. As for the recipes, there are three different varieties depending on whether milk is the main ingredient, if a part of clean broth is also used or if a glass of pig’s blood is added. Related to similar preparations from other countries, especially with French crepes, there are those who defend that the Camino de Santiago served them as a way of expansion and those who relate them to one of the star dishes of our gastronomy: the empanadas. In the village of Lestedo (municipality of Boqueixón) since 1984 they have been celebrating every Sunday of Piñata (the following to Tuesday of Entroido) their Festa da Filloa.

Its peculiar shape is what gives its name to this popular dessert whose preparation is also traditionally linked to the times of the entroide. Simple ingredients present in most pantries such as eggs, flour, milk, butter, salt and sugar, together with lemon peel and aniseed, and a simple preparation (kneading and frying) are enough to be able to taste in our homes some rich ears and to put a sweet note to the cold days of February.

As with the ears, a simple glance at this other dessert is enough to know the origin of its name. Entroido flowers are not exclusive to Galicia, but in other parts of the Iberian Peninsula their preparation is linked to Easter. Eggs, flour, milk, lemon zest, sugar, a glass of aniseed, olive oil, lard and a mould to give them their characteristic shape are all you need to enjoy them at home.

Although less well known than some of the previous desserts, lemon leaves are also related to the entroido, as Cunqueiro wrote in his classic “The Galician cuisine”. The writer attributed their origin to Tui because, as he explained, it was a family living in that border town who had brought the recipe to the Mindonian lands, although they are also present in other parts of Galicia. The ingredients are almost the same as those of the ‘entroido’ flowers, but in this case the lemon zest is replaced by the lemon tree leaves themselves, which are used in the preparation process as a support for the dough and are removed before being presented. It should also not be forgotten that, as the famous Picadillo said in “The practical cuisine”, “each leaf cannot be used more than once”.

The entroido also tastes sweet in municipalities such as Laza thanks to another product with a great tradition in several municipalities in the province of Ourense. The bica is a sweet similar to the sponge cake and with slight differences in preparation from one locality to another. A Pobra de Trives, where they have been celebrating a monographic festival in summer for almost half a century, Castro Caldelas and Manzaneda are other municipalities that boast of bica and have made it a regular accompaniment to coffee and other products such as cheese or coffee liqueur.