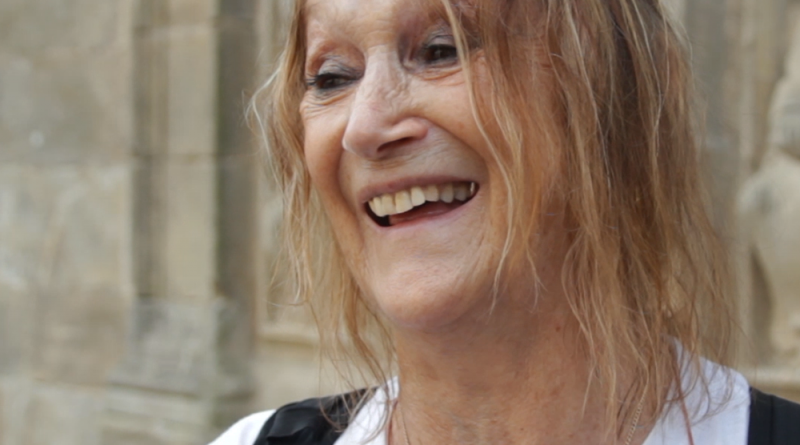 His premature death, four decades ago, prevented John Lennon from carrying out his plans to travel the Camino de Santiago accompanied by Salvador Dalí. But his sister, Julia Baird, has been able to fulfill that dream of reaching Santiago on foot. She did it a year ago walking the English Way and has just traveled it again to shoot a promotional video clip. Carolina Rubirosa’s song “Teu camiñar” has accompanied her in this project included in O Teu Xacobeo. Upon arriving in Compostela, the sister of the legendary beatle has shared her feelings of the Way and what she thought when she discovered her brother’s plans.

_What are your memories of the first time you traveled the Camino de Santiago?

_A feeling of peace, of meeting with myself and a pleasant fatigue due to physical effort.

_How did you feel when you arrived in Santiago for the first time?

_I felt joy for what I had done and pleasure for how beautiful the city is.

_What surprised you most about the Camino?

_I have only done the English Way and what surprised me most were its landscapes and, even walking in a group, the feeling of finding myself.

_The food, especially the octopus; Its landscapes and its people.

_Did your brother John tell you something about his plans to travel the Way?

_The information I have is through various people and the book “La Gran Vía se ríe”, by the Galician writer Antonio D. Olano, confidant and personal friend of Dalí, who was in charge of sending the telegrams that he sent to John. Dalí wanted a thousand young people to join them on that trip. Both were very eccentric and you could expect anything from them.

_Do you know how John became aware of the existence of the Way?

_I don’t know, maybe through his friend Dalí.

_How do you think he would have felt if he had traveled the Way?

_My brother had a spiritual background and would surely have influenced him positively, especially given the hectic lifestyle he had at the time.

_Do you plan to travel any other route of the Camino?

_Yes, but this time I would like to do it from Porto.

_What song by John Lennon do you think connects most with the Way?

_”Help me to help myself”, of which there is only one homemade demo since he did not record it in studio because he died before. Here you can listen to it: https://www.youtube.com/watch?v=lRkdo2vRx_Q

_What did you think when you were proposed to participate in a video to promote the English Way?

_It was proposed to me by Dr. Chema Ríos, with whom I have been friends for years and with whom I have collaborated in several charitable projects in favor of Médicos Sin Fronteras. When I listened the song by Carolina Rubirosa I had no doubt because it was very beautiful and I had already collaborated with her on the song “Isolation” by my brother.

_How is the music of Carolina Rubirosa?

_I have listened Carolina sing in Liverpool and on other occasions. Her voice conveys emotion to me and her songs are beautiful.

_What would John have thought of this project?

_Surely he would have liked it.

Do not miss the interview on video posted on our YouTube channel.