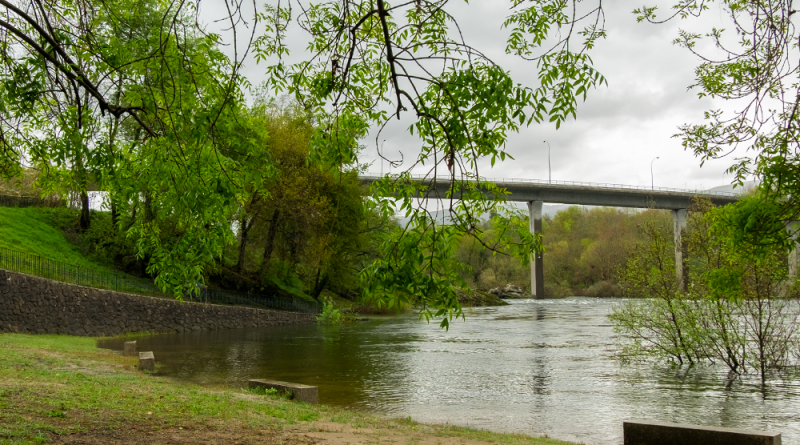 Looking out on the banks of the Miño in the Pontevedra municipality of Arbo not only allows you to enjoy a privileged balcony over the most important river in Galicia and contemplate, beyond its waters, the lands of Portugal. It also involves opening a window to a place in which ethnography, nature, history and leisure go hand in hand for the visitor to enjoy.

Close to of the international bridge that connects Galicia and the neighboring country, inaugurated in 1998, we found a place that is well worth a visit because it houses a splendid viewpoint and a beautiful and secluded river beach where it is possible to enjoy a bathroom surrounded by the typical vegetation of the area. In addition, this space located near to the A Estación neighborhood serves as the starting point and finish of several of the hiking trails designed by the Arbo City Council to publicize some of the main tourist attractions in the municipality.

The Miño-Deva trail starts in the surroundings of the river beach of Arbo. It is a route of just over half a kilometer in length and low difficulty that follows the course of the Miño upstream until it meets the mouth of the Deva while offering us beautiful views and several rest areas. The main element of interest on this tour is the stone structures builted in the river bed itself to facilitate fishing for the lamprey, which date to Roman times. Some historians say that in those times the emperors ordered to bring to Rome live lampreys from Arbo, which were later reared in vivariums until their consumption at large banquets. Today, the lamprey remains one of the most important hallmarks of the municipality, which has made it the star dish in its cuisine and the axis of two great gastronomic celebrations.

And the fisheries in which these prehistoric fish continue to be caught also serve as a compass and as the central motif of another trail that ends at the river beach of Arbo: the Fishermen’s Path. The Sela river beach is the usual starting point for walkers who enter this route of more than 10 kilometers in length. The route runs parallel to the Miño river bed, taking advantage of the trails that fishermen have been using since time immemorial to access the structures from which they catch the lampreys. The trail is equipped with information panels that allow you to take full advantage of the charms of this space that has been included in the Natura 2000 Network and where you can find dense riverside vegetation and a wide variety of tree species.

The attractions of the area are so many that they even captivated Hollywood producers, as  the oldest inhabitants of the place remember. The surroundings of the river beach of Arbo, in 1957, it served as a natural set for the filming of some scenes of “The Pride and the Passion”, a super production directed by Stanley Kramer, set in the Spanish War of Independence and starring three great stars of that time: Frank Sinatra, Cary Grant and Sophia Loren. None came to visit the town, since for the river battle filmed there the producers resorted to doubles. But many inhabitants of the area had the opportunity to participate in the film as extras and the deployment of technical, human and material means carried out (including a large cannon) caused a sensation in the area. A plaque in memory of those events placed in the surroundings of the river beach on the 50th anniversary of the filming merely confirms that we are in a dreamed-of place.