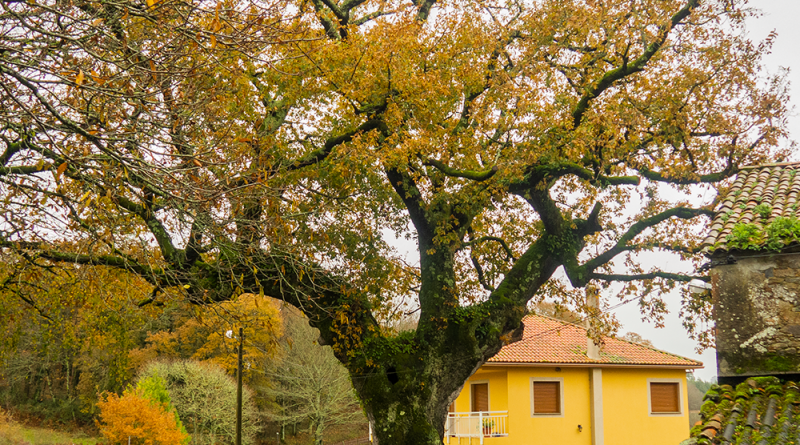 Trees are one of the most important elements of the Galician landscape and of our history and culture. Just take a look at the toponymy to discover that some of the most characteristic species of this land, such as the carballo (oak) and chestnut, not only populate our territory forming forests, but their presence has also served to give name villages, parishes and even municipalities. Places like Carballo, Carballeda, Castiñeiro and, especially, Souto are counted by tens throughout the four Galician provinces.

It is not surprising therefore that as with other important elements of our historical, architectural and ethnographic heritage, trees also have their own protection figure. This is the Galician Catalog of Singular Arbores, a figure created by the Xunta de Galicia in 2007 and that includes both concrete specimens and broader tree groups.

At present, the catalog has almost 200 entries, of which the majority correspond to singular trees (157) and the rest (38), to singular formations. The list includes the most outstanding specimens of native species, but also foreign trees that, due to their characteristics, deserve protection.

Aspects such as its size, age, historical or cultural significance, rarity or beauty, among others, as well as the symbolic value given by the inhabitants of the place and its scientific, cultural, didactic, landscape or ornamental importance are examined to include a tree or groups in the catalog. Thus, it is possible to find in the catalog specimens such as the Carballo del Pazo de Cartelos (Carballedo), from which it is estimated that with its 2,000 years of life it is the oldest tree in Galicia, or the Grandfather of the Eucalyptus of Chavín (Viveiro ), which is over 70 meters high and is one of the tallest in all of Europe. As for the singular groups, the catalog includes carballeiras such as the Caldas de Reis and San Lourenzo de Trasouto (Santiago de Compostela) and chestnuts such as those of A Retorta (Viveiro) and Rubial (Folgoso do Courel).

The inclusion of a specimen in the catalog implies its protection, regardless of its ownership and whether it is located on a public or private property. Any action that may disturb its integrity, health or appearance is prohibited. The protection also extends to its immediate environ, so that the realization of projects that may affect them will be subject to prior authorization by the Xunta.

The creation of the catalog has allowed the general knowledge and enhancement of many of these trees, although in some cases it has not been sufficient to avoid the natural effects of the passage of time, meteorological phenomena such as storms and lightnings and even, sometimes, the human action has affected some specimen.