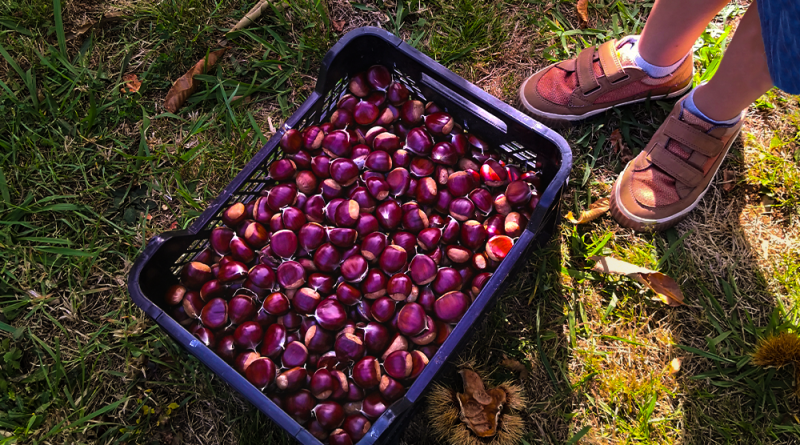 Autumn in Galicia is a season marked by colors and flavors. And in both cases, the chestnut forests (soutos) that populate our land play a central role. The refreshing shade that they give us in the hottest times gives way after the summer to a stage in which the leaves begin to change their hue and fall to form beautiful natural carpets and in which the fruits of these trees show us again because they have played a crucial role in the agricultural world in many areas of Galicia for several millennia. Chestnut trees are one of the defining elements of our landscape and from here we pay tribute to them by inviting you to meet some of the most surprising specimens that you can admire up close if you visit Galicia.

Threatened half a century ago by the project of a road, one of the main singularities of this specimen located in the village of Baamonde has to do, precisely, with the way in which it was saved. The local artist Víctor Corral took advantage of an existing hole inside the tree to carve a chapel in honor of the Virgin and thus turned this centenary chestnut into a living museum and a place of worship.

With half a millennium of life, almost 20 meters high and more than 8 meters perimeter at its base, the enormous chestnut tree of Val da Fonte, located in the village of Paderne, is already a must for those who enter some of the hiking trails that cross the Lugo municipality of Folgoso do Courel. The passage of time has made a dent in the wood of its lower part, leaving a large cavity in which it is possible to take shelter if the rain surprises you in the middle of the route and that serves as a frame for the photos that hikers take there. Also in Folgoso do Courel we can enjoy the Souto da Rubial, in the Parada village, where we can see more than fifty hundred-year-old chestnut trees.

Located in the Souto de Rozavales (declared a natural monument), the Pumbariños chestnut stands out among its neighboring trees for its longevity and size. They say that this specimen was already more than one hundred years old when Columbus returned from his first trip to America and its perimeter already reaches 13 meters, which makes it one of the largest in Galicia. If you want to hug him, you will need to be accompanied by a large group of friends.

Although part of the treetop is missing, the dimensions of this chestnut tree, which has a perimeter of more than ten meters at its base, continues to impress anyone who looks at it closely. It is located in the Souto da Ribeira, in the parish of Manzalvos, through which an old commercial route known as the Pana Route or  Bragantina Route. Also in A Mezquita it is possible to see other unique chestnut trees such as those of Prado da Ponte, Cadavós and O Mola.

The Pexeiros chestnut tree, in the municipality of Os Blancos, not only stands out for the dimensions of its perimeter. A study carried out last year by the Agronomy Group of the Lugo Campus of the University of Santiago de Compostela concluded that it is the oldest documented case of graft carried out in southern Europe. According to this research, this practice was carried out in the first third of the 15th century, while in other places such as Portugal, the Basque Country or Italy, the first documented cases date back to the end of the 15th, mid-16th and 17th centuries, respectively.

With a perimeter of more than ten meters and a dozen large branches that reach an altitude of 30 meters, the chestnut tree of Cerdedelo does not leave those who contemplate it indifferent. It is also in an area of ​​great natural value where there are several hundred more specimens of these and other trees.

Located in the heart of an autochthonous forest is this chestnut tree of more than 9 meters in perimeter and 15 meters high. Its use as an important producer of chestnuts is evidenced by the presence in its vicinity of the remains of a “sequeiro”, an old stone construction that was used to store and dry the collected fruits.

At the access to the Soutogrande village we can find this spectacular chestnut tree split in two and which has its own legend. They say in Vilariño de Conso that its current appearance is due to the impact of lightning, but they assure that this was not accidental, but that it was the Virgin who directed it towards the tree to prevent it from affecting the residents of the village.