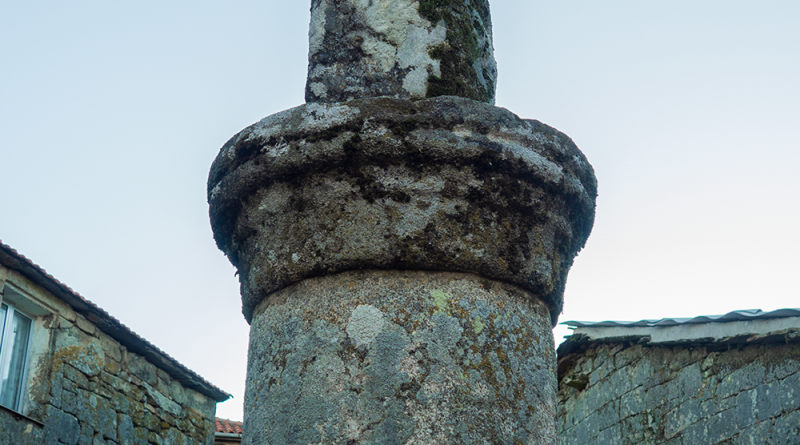 The passage of time is sometimes a slab under which much of our heritage is hidden. Many times it is impossible to recover these vestiges and we have to be content with evoking them through indirect testimonies, but in some cases a chance discovery allows to put in value a monument that for centuries had remained forgotten and thus relive a piece of local history.

They know it in the village of A Alberguería, in the Ourense municipality of Laza, a place well known to the pilgrims of the Silver Way and which for a decade now has proudly displayed one of those happily recovered pieces. Presiding over and giving name to the Plaza del Rollo, a circular stone column stands as a testimony to the justice that was exercised in other times and as an example that the efforts of a few can serve to reconcile us with our heritage.

What might seem like a simple ornamental piece, is really a curious jurisdictional symbol unique in Galicia. Columns like that of A Alberguería marked the administrative category of a village and its jurisdictional limits and, on occasions, also served as pillory, that is, the place where prisoners were exposed to the rest of the neighbors and subjected to physical punishment. The validity of this type of justice was maintained for several centuries, until in 1812 the Courts of Cádiz decreed its abolition causing the vast majority of these columns to be knocked down and eventually disappearing.

In the case of the Roll of A Alberguería, the writer and historian Eligio Rivas Quintas maintains that it may be the only one that has been preserved in Galicia although it limits the uses it had in the past. He details that it does not present rings to tie the prisoners or signs indicating that it had been used as a pillory, so it concludes that it only served to mark the limits of the jurisdiction of the Count of Monterrei and as a sign for the pilgrims who were heading to Compostela for the Vía de la Plata.

It was precisely Eligio Rivas who allowed the existence of the Rollo de Alberguería to be brought to light. It all started in 1993, when during one of the historian’s tours of the area for a publication on the Silver Way, he realized that the strange column that had been used as part of the closure of a particular orchard was really one of those lost jurisdictional rolls. The most veteran residents of the place said that they always remembered it in this curious location, but some also explained that his elders had told them about the time when the column occupied the center of the town square. In 2010, almost two decades later, the Roll of A Alberguería returned to its original place thanks to the work of Eligio Rivas, the commitment of the Association of Friends of the Via da Plata-Camiño Mozárabe and the support of the neighbors and the local, provincial and autonomous administrations

There it remains today, in the Plaza do Rollo, turned into one of the most important monuments of the village and a place of obligatory stop for the pilgrims of the Vía de la Plata who can add a bit of local history to their story of the Camino.