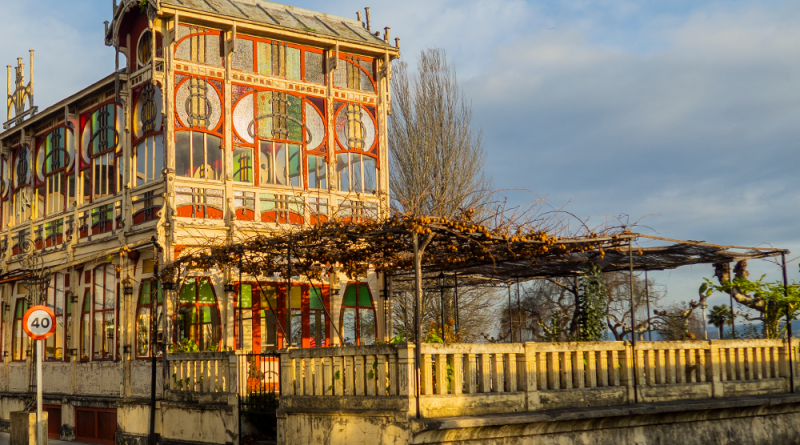 Walking through the streets of Sada is to open a door to the past, but not at any time, but at a very specific time and style: modernism. This was an artistic trend that developed between the end of the 19th century and the first years of the 20th century and that permeated the most diverse forms of expression and creation: from literature to music through painting, fashion and, also, the architecture. It was in this last art (also known as Art Nouveau) where his legacy in Sada has been more intense and has survived until today even though his appearance in the town was rather late and it was the result of a curious circumstance. It could say that this architectural style arrived to Sada by tram because the history and evolution of both evolved in parallel.

1922 is the crucial date in this story because two essential facts coincide. That year the first tram from A Coruña arrived in Sada, inaugurating a stage of great prosperity and strength for the town. And that same year a building was also inaugurated in Sada that has become the most visible and important symbol of local modernism, and that like the tram, came from A Coruña. Because La Terraza (The Terrace), the impressive glazed pavilion that presides over the seafront in Sada, was not always in that location.

In its origins it was part of the complex of constructions that had been built in the gardens of Méndez Núñez, in A Coruña, as leisure spaces to admire art exhibitions, watch film projections or simply surrender to the talk or contemplation. The Kiosko Alfonso continues to be an outstanding witness of that time and is directly related to the property today located in Sada.

La Terraza was conceived by the architect Antonio López Hernández and built in A Coruña in 1912. During the time he was in his first location he received several extensions (the length of his facade went from 20 to 30 meters) to try to respond to the demand increasing of this kind of spaces, but with the change of decade the businessman Manuel Zapata Montero proceeded to move with the aim of bringing the leisure environment of the Coruña gardens to Sada as well.

Already in its new location, after a laborious transfer piece by piece in carts pulled by oxen, La Terraza became a place of reference of Sada as a ballroom and lived several decades of splendor. But shortly after the closure of the tram line that linked the town with A Coruña (in 1957) its time of decline began. Since then until today it has worked as a cafeteria or restaurant.

But the influence of La Terraza de Sada was not limited to the lifestyle and leisure of the local population, but together with the tramway became a force for progress. If that means of transport contributed to the economic boom that boosted the urban development of the town, the modernist lines of the emblematic building became the example to be followed by local architects and developers for several decades. Thus, a it was imposed style characterized by elements such as large windows and balconies, careful ornamentation based on ceramics and glass, and a wide chromatic variety. Many of the buildings born under the influence of La Terraza have also survived until the present and have become a cause of pride for the residents of Sada and a good reason for visitors to approach the town and stroll through its streets.

The streets of Rio, Argentina, da Lagoa, Linares Rivas and Barrié de la Maza keep numerous examples of a style that also extended to traditionally sailor neighborhoods such as A Tenencia. At present, the City Council has even drawn up a route which allows us to visit a good part of the urban center while we discover the traces of those times already passed. If you want to travel to modernism you will not be able to take the tram, but you will discover that its charm is still alive in Sada.