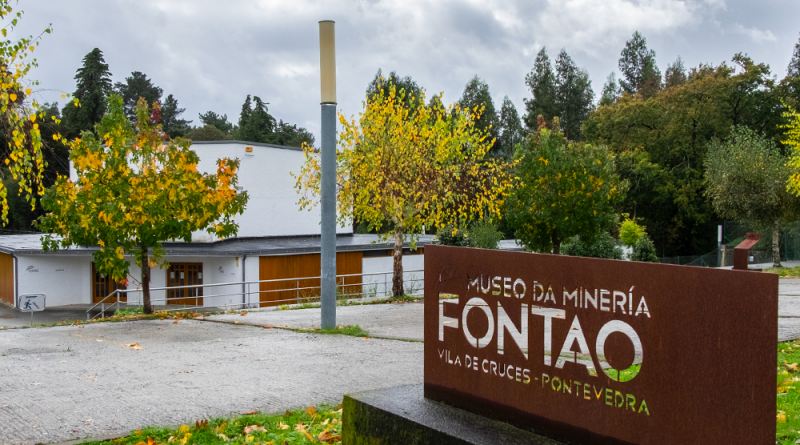 Mining is an activity that has been developing in Galicia for millennia. Their traces are visible in many places and in many of them these vestiges are already part of our historical heritage. This is the case of some constructions and places that go back to the time of the Romans, but also of places that tell us about a not so remote past and whose memory still remains very present in the mind of some veteran neighbors.

Old tunnels, open-pit mines and the various buildings that grew around them shape a mosaic that in some places has taken a new life. This has happened in the Pontevedra municipality of Vila de Cruces, where the facilities of the old mining town of Fontao today host a new residential area and a brand new information center (the Fontao Mining Museum) that allows us to learn about the history of this important deposit.

It was during the second half of the 19th century when the tin that was in the area attracted the attention of the mining industry, thus opening a stage of exploitation that would last for almost 100 years, although alternating moments of inactivity with others of feverish work. Tungsten was also added to the interest in tin and for a few years, at the beginning of the last century, the company that exploited the deposits in the area had practically a monopoly on the production of both minerals in Galicia, although internal problems, fluctuations of the market, the  Great War and the vicissitudes of the interwar period affected the progress of the business, causing the operation to remain closed in several different periods.

The applications in the military industry of tungsten were the reason why, starting in the 1920s, the boom in the Fontao mine was going to run in parallel with various historical events. It will be the armed conflicts (the Spanish Civil War, the Second World War, and the Korean War) that will mark the moments of upturn in activity in the following decades. During the second of these conflicts is when the greatest demand for tungsten was experienced and, consequently, the exploitation required more labor, reaching around 3,000 miners.

In the middle of the last century, a small town was born next to the deposit, where other buildings such as the houses of those responsible for the mine, a cinema, a school and a church were erected next to the barracks built to house the workers. There were also a dozen shops in the mining town where it was possible to get all kinds of items, a soccer field in which the local team (the Minas Club de Fútbol) played with some First Division teams during the patron saint festivities, and a square where a daily market was held, as explain by those responsible for the Fontao Mining Museum.

The exploitation of the mine galleries ceased in 1963 and although the open-pit exploitation lasted a few more years, the drop in the prices of the ore caused the deposit to stop being profitable and closed its doors definitively in 1974. After a period of several decades of abandonment, the government decided to take advantage of the potential of the place by giving it a new use, while maintaining the memory of the activity that prompted its birth.

The old lodgings have been rehabilitated and made available to the population of the area and to returned migrants as public housing. The cinema has been converted into a modern auditorium also equipped with a shop and cafeteria, and the church and schools created to educate both the children of the miners and the rest of the children of the parish are now the exhibition places of the Mining Museum of Fontao. Crossing its doors allows us to get closer to the times when the industry was active through explanatory panels, models, machinery, audiovisual projections and photographic material. And strolling through its surroundings and walking the streets that surround the rehabilitated houses helps to imagine what life was like in that place half a century ago.