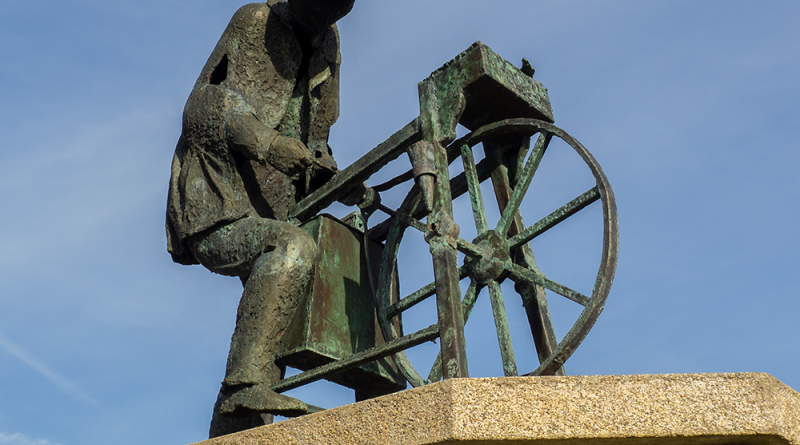 Today it is rare to hear the chiflo (small flute made of reeds), and its consecutive traditional shout of “Aaaaafiladooooooor !. But when that magical moment happens, homesickness takes over the minds of Galicians who have contemplated this combination of profession and way of life as another element of our traditions.

And it is that Galicia was the cradle of knife sharpers men, more specifically the municipality of Nogueira de Ramuín, where, they say, the first departed with their “tarazanas”. These were huge wheels, almost like those of a cart, which were protected by a wooden frame and a large belt, and which the sharpener was pushing while walk.

Before this characteristic contraption appeared, sharpeners men carried their work utensils on their backs or loaded on an animal. But around 1860 an English sharpener left his wheel to fix in Liñares, in Nogueira de Ramuín. It was then that the idea of improving the wheel that the man brought with him came up, so they decided to make a model and improve it, getting it to be carried on the wheel itself and not be burdened with it. Walnut wood, lighter but also more resistant to the weather, was the material chosen for our “tarazana”.

From there the profession was spreading. The ourensanos knife sharpers traveled through Galicia and crossed borders to make a living. They raised their “tarazanas” to the ships that crossed the puddle to the Americas and there they diversified their work: they no longer only sharpened knives, they also began to arrange umbrellas, saucepans, all in order to grow their sources of income to get a better future and be able to return to Galicia.

With the vocation of lonely wanderers, they were creators of a language never shared with other mortals. And they had their own tongue: the barallete. The lexical wealth of this form of communication was such that they could have long conversations with each other without anyone understanding them. They say that was the main reason why this special language emerged. A language that reached the 5 continents and was much more than a way of communicating, it also became a way of not losing the roots of our culture.

To this day many words of the barallete are still used among the people of the villages, “although nexo veas arreadores animen maquinando por la callumeira y arromanando barallete”. You have not understood anything? Well, this is an example of the type of phrases they used between them: although don’t see sharpeners here walking down the street and speaking barallete. It wasn’t that hard, right?

Well, if you want to know more about this profession, which was the livelihood of many families and an important source of income in the Nogueira de Ramuín area, and their own language, you just have to go to their capital, Luintra, where you can still meet inhabitants who know the barallete, and where the last artisan workshop of wheeled in Spain is also survived.