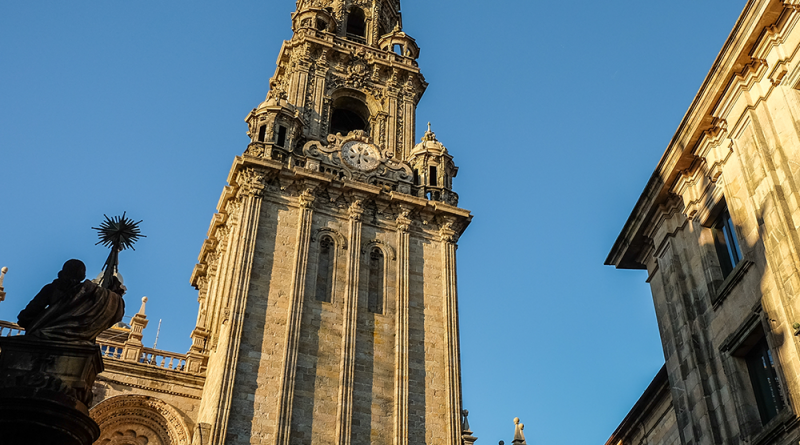 Baroque art cannot be understood in Galicia without the figure of Domingo Antonio de Andrade, an architect born in the town of Cee in 1639 and who died in Santiago de Compostela in 1712. It is in the Galician capital where the mark of this restless creator, who in 1676 became master builder of its cathedral, is still most present, but cities and towns in the four Galician provinces today keep a good part of the legacy of the man who became a great reference for many other Galician architects. Here we propose a tour of Galicia through some of his most outstanding works.

The Clock Tower and other areas of Santiago Cathedral

The Clock Tower, also known as the Berenguela, of the Cathedral of Santiago de Compostela is Domingo de Andrade’s most emblematic work, but not the only mark he left on the basilica and its surroundings. Andrade used the foundations of a first tower designed in the 14th century to erect this famous structure which houses the main bell of the basilica and stands out for its slender, harmonious structure and beautiful decoration. These characteristics have made it one of the best-known elements of Compostela Cathedral. The lantern that remains lit on its upper part during the Holy Years as a beacon for pilgrims further increases its symbolic value. Andrade was also responsible for the facade of the Cathedral towards the Plaza de la Quintana and for the ingenious scallop-shaped squinch that he designed on one side of the Platerías façade to join the transept of the cathedral with the first floor of the cloister. He was also involved in the renovation that gave the Holy Door its current appearance and in the construction of two of the buildings that complete this space, increasing its monumentality: the Casa da Parra and the Casa da Conga.

The foundation of the convent of San Domingos de Bonaval in Santiago de Compostela dates back to the beginning of the 13th century and tradition attributes it to the saint himself on the occasion of the pilgrimage he made to Santiago at that time. However, the current appearance of this monument, which today houses the Museo do Pobo Galego, is largely due to the work commissioned to Domingo de Andrade at the end of the 17th century. His is the façade of the porter’s lodge, the cloister and the spectacular triple helicoidal staircase, which is considered to be one of the main examples of Andrade’s ingenuity and virtuosity. The way in which he inserted in the same space three independent ramps leading to three different floors continues to amaze everyone who sees it.

The basilica in Lugo is another of the monuments on which Andrade left his mark, together with other Galician Baroque masters such as Fernando de Casas Novoa, whose works also coexist in the cathedral in Santiago de Compostela. In this case, Andrade was responsible for the work in the sacristy and the chapterhouse, rooms in which his characteristic ornaments with floral motifs can be seen.

Churches of Santiago A Nova and San Xoán de Tirimol

Those in charge of the old Dominican convent in Lugo, now the church of Santiago A Nova, also counted on Andrade’s talent to undertake some works during the 17th century. In fact, it is believed that the convent was the origin of the three altarpieces that can be seen today in the parish church of San Xoán de Tirimol, also in the municipality of Lugo, and whose authorship is attributed to the architect from Cee.

At the time when Andrade was finishing the Clock Tower of the cathedral of Compostela, he was called from Ourense to take charge of the project for the chapel that was to house the prized Holy Christ of the cathedral of the city of Las Burgas. In this case, however, he was unable to take on the project in its entirety and it had to be completed by Francisco de Castro Canseco. It is also attributed to Andrade the authorship of the plans followed for the reform that was undertaken at the end of the 17th century in a civil building in the current Avenida de Pontevedra.

Andrade was also one of the architects that Andrés Ibáñez de Mondragón, first Marquis of Ribadulla, called upon to renovate the Torres and Casar de Ortigueira, in the municipality of Vedra, and to begin to shape the construction of the current Pazo de Santa Cruz de Ribadulla, one of the most important stately buildings in Galicia, especially famous for its gardens.

Church of the convent of the Poor Clares of Tui

Among the wealth of monuments in the city of Tui, there is also a place for another example of Andrade’s work. This is the case of the church of the convent of the Poor Clares, designed in 1688 to complete an enclosure founded at the beginning of the 16th century on the site of an earlier medieval convent.

In addition to the altarpiece in the church of his native town, which was destroyed during the French invasion at the beginning of the 18th century, Andrade undertook other works in the region where he was born. He is attributed with the bell tower of the church of San Pedro de Buxantes, in the municipality of Dumbría, in which some scholars perceive similarities with the Clock Tower in Santiago de Compostela.