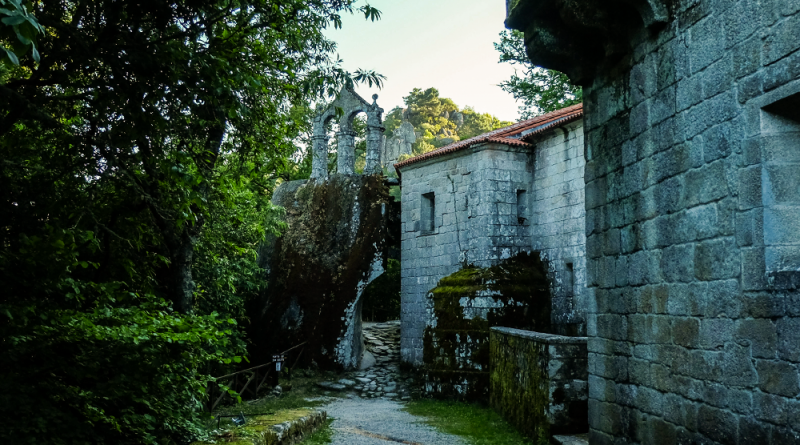 A tombstone currently preserved in the Provincial Archaeological Museum of Ourense allows us to go back to the year 573 in search of the origins of the Monastery of San Pedro de Rocas, one of the most unique and surprising monasteries in all of Galicia. Said tombstone refers to the inheritance received by a small group of people, which allows us to deduce that in this secluded place in the municipality of Esgos (Ourense) there was already a small community at those time and that because it was precisely an inheritance, its foundation is even previous. In such a way that San Pedro de Rocas would be the oldest Christian construction in Galicia and one of the oldest in all of Spain.

The mist of the passage of time envelops the history of that first religious settlement and takes it to a territory where it is confused with legend. Located in a prolific area in settlements of hermits who had come there attracted by the beauty of the landscapes and the possibilities of isolation that it offered, the origin of the monastery of San Pedro de Rocas would also be related to those first ascetics. This is attested by the primitive caves that served as their home and chapel and that were incorporated into the later church. This fact constitutes another of the distinctive features of San Pedro de Rocas since it is the only cave church in Galicia and also explains the origin of its name. The Rocks of its name are the stone formations of Mount Barbeirón with which the enclosure seems to merge at some points. Almost nothing is known of that first stage, although the main hypothesis is that the place was abandoned a few years later due to Islamic incursions. The following reference in time to the monastery takes us back to the 9th century, when it would have been rediscovered during a hunt by a knight who, captivated by the attractions of the place, decided to make it his home and that of his companions becoming an abbot.

Moments of apogee, under the protection of the monasteries of San Estevo de Ribas de Sil and San Pedro de Celanova in successive stages, and times of decline linked to fires (three have been documented over the centuries) and other events mark the history of a place that after the confiscation of Mendizábal (in 1836) lost its monasterial condition to be reduced to a parish church. The last fire, which occurred at the beginning of the 20th century, was what led to its abandonment as a place of worship and the construction of a new church in another location not too far away. But the beauty of the place, the history of San Pedro de Rocas and its constructive peculiarities led to the old monastery being declared a historical-artistic monument and since then various works were undertaken to recover it. Today, converted into the Interpretation Center of the Ribeira Sacra and the Monastic Life of San Pedro de Rocas, it has regained new life as an open door to the history and heritage of the entire area.

Touring the rooms of the old Priory House means traveling back in time to learn how the monks lived and how the monastery evolved. In addition, the installation pays tribute to the crafts, landscapes, traditions and legends of the Ribeira Sacra and allows us to understand why this area formed by the valleys of the Sil and Miño rivers attracted the attention of various religious communities until they became one of the geographical areas with the highest density of monasteries in Europe.

But the best way to soak up the charms and history of the place is to walk among its buildings and enjoy the beautiful scenery that surrounds it. Although the primitive church was subjected to various reforms over the centuries, inside you can see the layout of the three caves in which the first inhabitants of the place settled, and contemplate several tombs and a world map painted on a wall , the only one from the Romanesque period that is known.

And in its surroundings, in addition to the San Benito fountain, whose waters are attributed curative properties, you can see the bell tower built in the 15th century. The construction lacks bells, since they were transferred to the church of Quinta do Monte, but it continues to attract the attention of visitors for having been raised on a natural stone arch, thus becoming one of the most iconic images of the place.

The monastery is also the goal of an old path, the Camiño Real, today recovered as a hiking route that not only allows visitors to get there from Santa María de Esgos as the monks and residents of the area did centuries behind, but brings us closer to another of the heritage elements that the place keeps: the “petos de ánimas” that you can see in the route.

In short, San Pedro de Rocas is a must see. History, heritage, legends, landscapes, hiking … Do you need any more reason to get going?