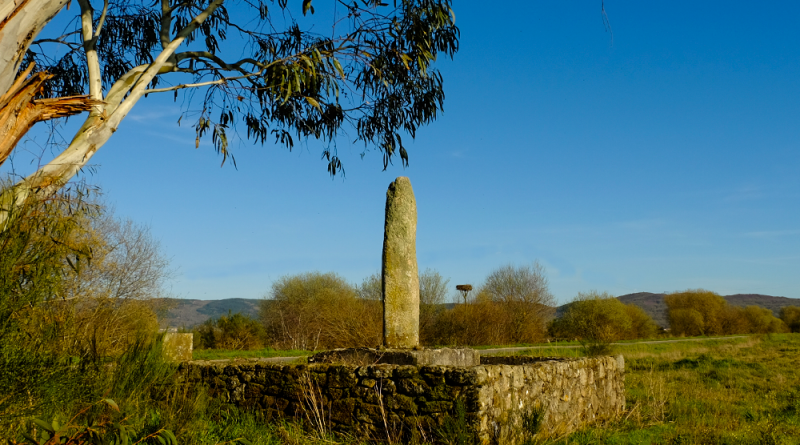 Dozens of stones are raised throughout Galicia as a reminder of the rites practiced by the inhabitants who populated these lands several millennia ago. Known as menhirs, “antas”, or simply high stones, many of these monoliths have remained forgotten for centuries and in some cases were even destroyed, but a few have survived to this day turned into monuments, and others are still waiting to be discovered.

Among those that we can contemplate and admire is the Pedra Alta de Antela or Cortegada, a menhir that lives up to its name since it is one of the most important of all we can see in Galicia. It takes its different surnames of the geographical area and of the parish of the municipality of Sarreaus where it is located.

Several researchers have tried to find its traces through history and have concluded that it could be erected between the third and fourth millennium BC. As all monuments of this nature, their exactly purpose is unknown, although the main hypothesis points to their relationship with funeral rites: “Menhirs are mainly phallic symbols and concentrators of the life-transmitting force, and therefore related to the magic rites for the resurrection or continuity of life beyond the grave”, in the words of the archaeologist Luis Monteagudo García.

Precisely, that pagan character was what caused that, as it happened with other archaeological remains, some of these monuments were destroyed during the Middle Ages and that others were subjected to a process of Christianization to erase the trace of those practices. In the case of Pedra Alta de Cortegada several inscriptions can be seen, some of them superimposed, pointing in that direction, as one of its main researchers, Tomás Vega Pato, maintains. This ethnographer and popularizer identified several crosses in addition to an inscription of a Christian nature that would have been made between the 9th and 12th centuries. Even some local legend that tells that it was a “moura” that left the menhir in that place would have been subjected to a similar process replacing the mythological figure with the Virgin.

Due to the location where it was found in not too distant dates, it is assumed that Pedra Alta de Cortegada once served as a dividing frame between the municipalities of Xunqueira de Ambía, Vilar de Barrio and Sarreaus. It was located very close to the limit of these three municipalities and in the vicinity of the old road that crossed the Antela lagoon, connecting the first of those municipalities and Monterrei. The different state of conservation that can be seen between most of the stone and its lower segment suggests that for a long time part of the dolmen would have been buried in the ground 60 centimeters. Some people also point out that the Antela lagoon (dried out in the middle of the last century) could owe its name to this menhir since antela would be the diminutive of anta, a word that in Galician is applied to the stones used in megalithic monuments and fences.

La Pedra Alta de Cortegada or de Antela was knocked down by a tractor in the 70s and had to wait more than a decade to be recovered and placed on a pedestal not far from the place, coinciding with the works undertaken on a nearby road. Today, with its almost 3 and a half meters high, it continues to impress everyone who visits it and raises many questions about a past already remote.