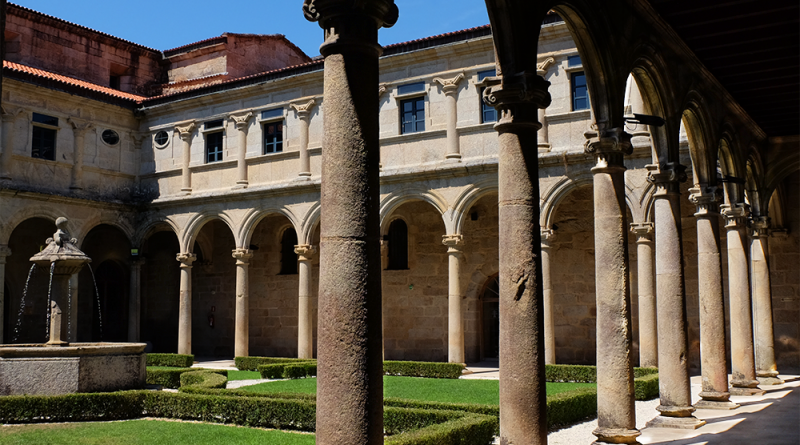 “The monastery of San Clodio del Ribeiro, in Leiro (Ourense), is one of the most representative monuments of Cistercian architecture in Galicia. Of Benedictine origin, in the 12th century this order changed to the Cistercian order and from this moment onwards the rise and importance of San Clodio began, becoming the main religious, intellectual and agricultural centre of the Ribeiro region. (…) Another important element linked to the monastery of San Clodio is the medieval bridge that spans the river Avia, giving way to the road that linked the monastery with the capital of Ribeiro: Ribadavia. It is a beautiful bridge with three arches that has remained intact since the 15th century and is one of the few remaining examples in Spain”. This is how the Official State Journal 40 years ago declared these two spectacular monuments located in the lands of the region of O Ribeiro as a national historic-artistic monument (confirming a previous declaration in 1931), at the proposal of the Royal Academy of Fine Arts of San Fernando.

Four decades after this recognition, the monastery and the bridge are still two of the main tourist attractions in the Ourense municipality of Leiro, and are a reminder in stone of several centuries of history. The origins of the monastery date back to the first millennium and the agricultural development that the area was already experiencing at that time. It is impossible to pinpoint the exact date of its creation, and although the first document referring to the monastery dates from 928, experts suggest that it may have been founded three or four centuries earlier.

Its inhabitants played a fundamental role in the development of the wine industry throughout the municipality, which is why the monastery is considered to be one of the cradles of Ribeiro wine. In fact, the Caravaca Cross that can be seen on its façade has been the object of veneration by the inhabitants of the area for centuries as a symbol of protection for the vineyards against bad weather.

The monks of San Clodio came to wield great power, especially after their incorporation into the Cistercian order. The disentailment of Mendizábal put an end to this period in the 19th century and some areas of the enclosure were put to various civilian uses, such as municipal buildings, a school and even a municipal prison. However, deterioration was taking its toll on the complex and its integrity was endangered well into the last century. Its recognition as a national monument in 1981 was the first step towards a recovery that began to take shape in the 1990s and which, after a major regional restoration project, allowed it to reopen two decades ago as a four-star spa hotel.

Its two cloisters (from the 16th and 18th centuries) are now used for weddings, banquets and other celebrations, but the memory of its former inhabitants is still present in the place. The undoubted artistic value of the complex is especially visible in its adjoining church, dedicated to Santa María and built during the first half of the 13th century. The church preserves its original style intact with few modifications, although the bell tower added at a later date and the partial enclosure of the enormous rose window that presides over the façade do stand out. The original wooden roof was also replaced in the 16th century with star-shaped vaults. Three beautiful apses form the chevet of this church, the interior of which houses some of the images that could be seen in the monastery in earlier times.

One kilometre from the monastery and over the waters of the river Avia stands the bridge that shares the monastery’s status as a national monument. It was built during the last years of the 15th century, underwent major repairs in the first third of the 18th century and has a stone cross in its central part which, according to some scholars, was added in the 19th century. Its structure of more than 80 metres in length, formed by three large arches (the central one is 19 metres long), has allowed monks, neighbours and travellers to cross from one side of the river to the other for more than half a millennium. And this important function also meant that in 1809, during the War of Independence, it became the scene of major clashes between the opposing sides.

Nowadays, those convulsive times are long gone, and the bridge of San Clodio invites us to step on its centenary stones to enjoy a beautiful panoramic view of the river and complete the visit to its monastic and illustrious neighbour.