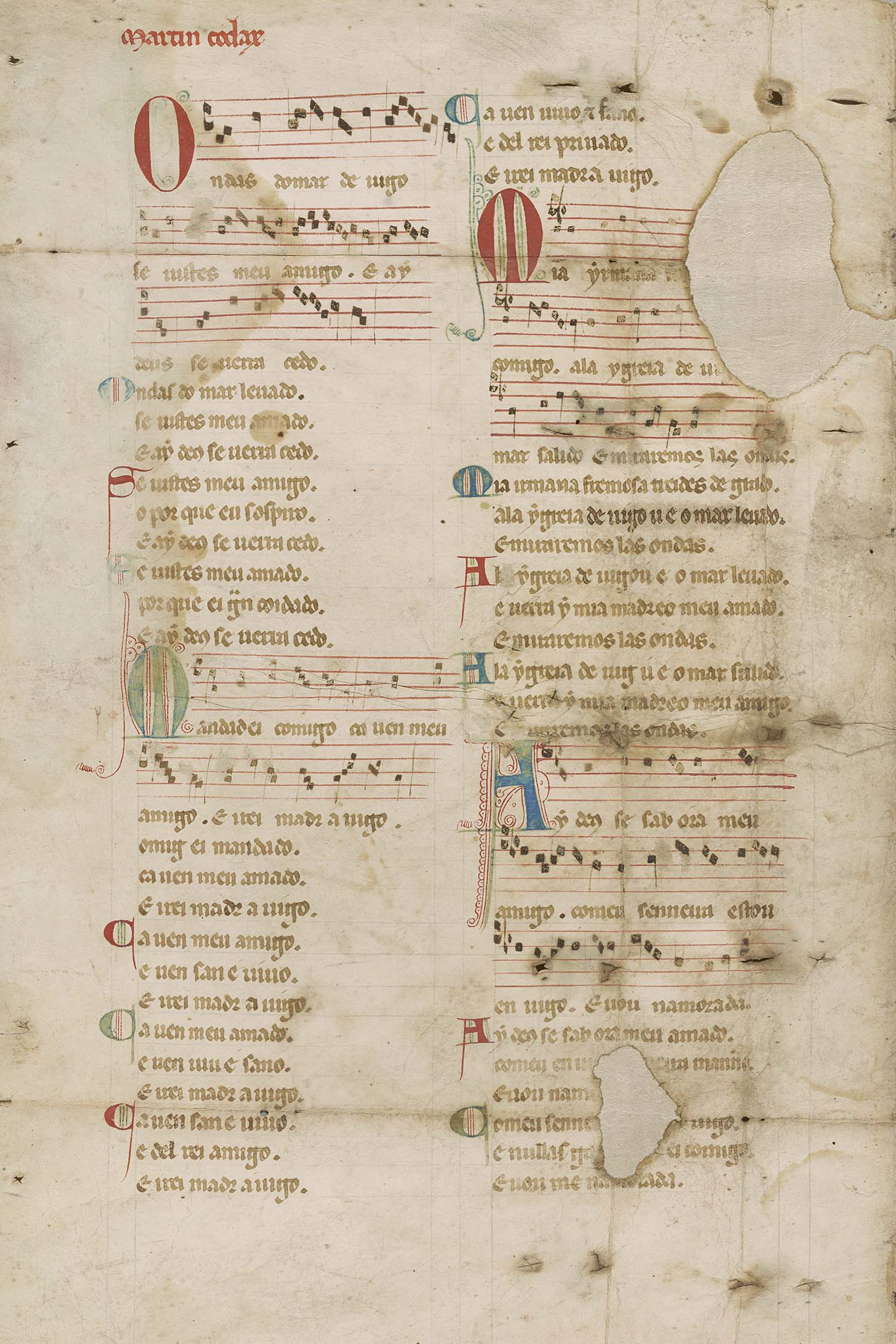 “Ondas do mar de Vigo, se vistes meu amigo? E ai Deus!, se verra cedo?” (Waves of the sea of ​​Vigo, have you seen my friend? Oh, God! Will he come soon?) These are probably the best-known verses of the medieval Galician-Portuguese lyric. They were written by Martín Códax in the thirteenth century and are contained within one of the great treasures of Galician literature of all times, the Vindel parchment.This songbook can be seen until March at the Museo do Mar (Sea Museum) of Vigo, a place that already in itself is worth a visit.

The Vindel connects Galician culture with its brightest past. During the thirteenth century several troubadours such as Martín Códax, Alfonso X the Wise, Don Dinís, Airas Nunez or Pero Meogo composed dozens of cantigas (songs) that had great repercussion among the poets of half of Europe. These compositions were collected in codices like the one now displayed in Vigo.

But the Vindel has a feature that makes it unique, beyond the beauty and quality of its author’s verses: in addition to the lyrics, the copyist wrote down the music that should accompany the poems. The history of the songbook is very curious, since it was a bookseller from Madrid, Pedro Vindel, who in 1914 found the codex enveloping a book by Cicero from the fourteenth century. Vindel showed the cantigas to Víctor Said Armesto, an expert in medieval literature, who confirmed the authenticity and transcendence of the seven cantigas contained within the parchment.

The bookseller sold it years later and the Vindel began a pilgrimage that would take it first to Sweden and finally to the Morgan Library in New York, where it has remained since 1977. From there it departed, for a few months, to return to the land where it was composed and which its songs speak of. This is, therefore, a unique opportunity to see a key fragment of the history of Galicia.

The parchment contains seven compositions and the exhibition at the Museo do Mar de Vigo is based on each of them to divide the experience. Accompanied by other medieval and contemporary literary pieces, the Vindel is the perfect excuse to explore what society was like at the time it was written. The exhibition consists of more than fifty sacred sculptures, archaeological remains, paintings and other documents that transport the visitor to a Vigo estuary much different from the current one, but just as rich and alive.

The Vindel parchment exhibition is a great opportunity to visit the Museo do Mar a unique  building since its conception. Designed by architects Aldo Rossi, initially, and César Portela, it makes use of part of the old Alcabre-Molino de Viento cannery, from the nineteenth century, integrating it into a series of buildings inspired by the old industrial warehouse. Through the permanent exhibition it is possible to learn how the ocean marked the daily life of this part of Galicia, from the first forms of fishing to the current industrialization, from the simple techniques used to collect fish until not too long ago to the large freezer boats and the modern technologies of packaging and preserving, in which Galicia continues to be a leader.

The museum is set by the sea, in a small beach where fishermen still work like they did in the old days. One of its biggest attractions, which will delight the children, is the aquarium, where you can see the species that inhabit the estuary’s seabed: bream, conger, turbot, sardines or flounder share their habitat with lobsters, king crabs and starfish, displaying the richness of the “sea of ​​Vigo” to which Martín Códax, 800 years ago, threw questions impossible to answer.