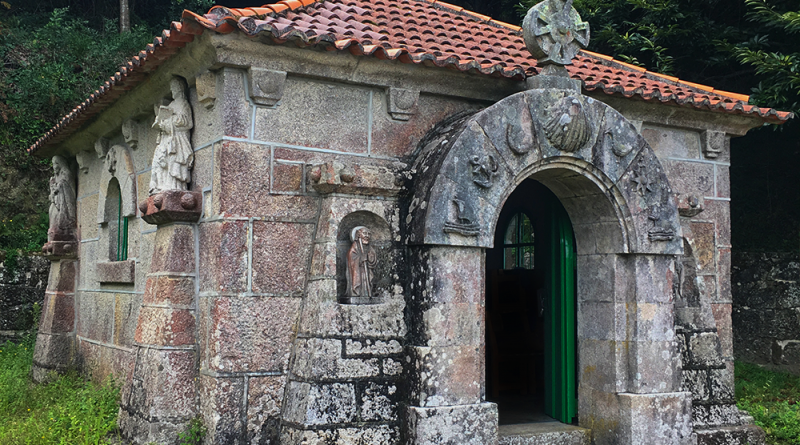 It does not have the dimensions of the great liturgical precincts nor is it the nerve center of a village or the destination of a massive procession, but the small Capela dos Santos Reis is full of peculiarities. A place that you must visit if you approaches to the municipality of Pontevedra de Bueu, on the peninsula of O Morrazo.

The current construction was built over 60 years ago on the ruins of an old 17th-century hermitage linked to the nearby Pazo de Castrelo. Its location, on the side of one of the mountains that stand behind Bueu, and the views from there of the municipal capital and much of the Pontevedra estuary are already a good reason to visit the Chapel and its surroundings. But in addition, despite its youth, the chapel presents several historical and architectural elements that make it a very unique place.

Its design was commissioned by the Council in the middle of the last century to Urbano Lugrís, one of the most important Galician painters of the time and a prominent representative of the surrealist movement. The passion for the sea is very present in all the artist’s work and the Capela dos Santos Reis was no exception. Scallops, conch shells, anchors, whales and other marine motifs served to Lugrís to decorate the arch that presides over the access door to the enclosure and remind the visitor of the importance that this element has for the neighbors of the area. It was also a project that allowed him to develop to the maximum as a creator since he could to combine design, painting, sculpture, architecture and even the direction of the works.

The fact of being dedicated to the Three Wise Men (the Santos Reis that give it its name) makes this small temple an exceptional case not only in Galicia, but also in Spain and the rest of Europe, because there are hardly any temples erected to honor to Melchor, Gaspar and Baltasar.

Part of the original legacy of Lugrís, such as the altarpiece paintings and even the sculptures of the three kings have been lost over the years, but the place retains almost intact its original charm and the trace of the work developed there by the artist still It can be seen in other areas of the municipality of Bueu. The original sketches of the sculptures decorated the plenary hall of the town hall of Bueu and some of these and other Lugrís documents are preserved today in the Massó Museum.

The members of the Santos Reis cultural association are currently responsible for the care of the chapel and its surroundings and organize an annual celebration, but the exterior of the chapel can be visited at any time and some of the routes designed by the Bueu Council to value its heritage, it is included in the layout, so there is no reason not to enjoy this small, but interesting place full of art and history.