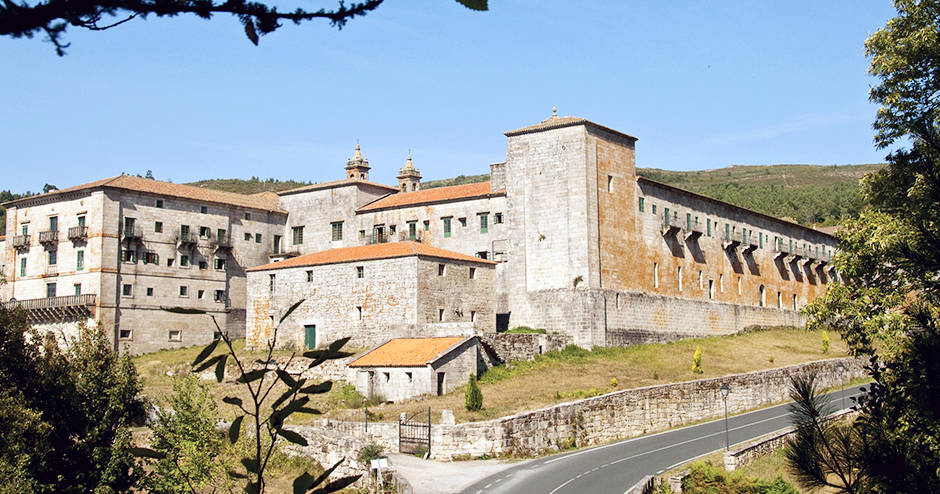 Ursaria, the Land of Bears. This old place-name comes to mind more than once when travelling the areas surrounding the  Oseira Monastery. This monastery, one of the most spectacular in Galicia, holds around it much more than art and religiosity: the surrounding Serra de Martiñá preserves a biodiversity that takes you back to the times of medieval monks.

Oseira is overlooked on a daily basis by Pena Veidosa’s jagged peak; the mountain, 1,000 meters in altitude, was declared a Site of Community Importance and is crossed through several trails. Altogether, they make up more than 2,000 protected hectares in the heart of the Dorsal Galega, halfway between the municipality of Cea, where the monastery is located, and that of Carballedo. Its inclusion in the Natura 2000 Network is due to the importance of the flora and fauna sheltered in these hills, with half of its area covered with scrubland.

The erosion caused by the wind, which blows hard in the higher parts of the hills, has left a characteristic landscape in the higher areas marked by shrubs and huge granite bowls that often bring to mind the bulk of medieval castles. Among the bushes, visitors can see, if they are lucky, animals as characteristic to Galician fauna as roe deer, quail, salamander or flying deer, rare in other hills; and, up in the sky, hawks flying in search of prey.

The scenic wealth of the Pena Veidosa is the perfect counterpoint to the splendorous heritage of the Oseira Monastery, which has been the spiritual and economic heart of the area for nearly a millennium. The monastery was founded in 1137 by a group of monks seeking solitude on the mountain’s steep slopes. The place-name itself indicates the location was chosen for being inaccessible: “ursaria”, the word from which the current Oseira derives, refers to a territory where bears,”ursus” in Latin, once hid.

Oseira is an architectural prodigy of the Cistercian style. The church dates from the beginning of the thirteenth century. The chapter house, from the fifteenth, has one of those structures that, once seen, is never forgotten, with its roof supported by ribbed column shafts that twist upon themselves and crowned by arches covered in carved vines, practically exotic. The congregation lived a time of splendour in the last few centuries of the Middle Ages, and then, in the Modern Era, faced a series of misfortunes that came close to shutting it down. In 1552, a terrible fire severely damaged every building except for the church, and the congregation even considered moving the monastery to another location.

However, its various abbots obtained funding (even appealing to the Crown) to rebuild the centre, giving it its current robust appearance. The beautiful cloisters were projects carried out between the sixteenth and eighteenth centuries, following the architectural styles of each era. Practically abandoned since the confiscation of church property in the early twentieth century, it was not until the sixties of last century that this marvel’s systematic restoration began.