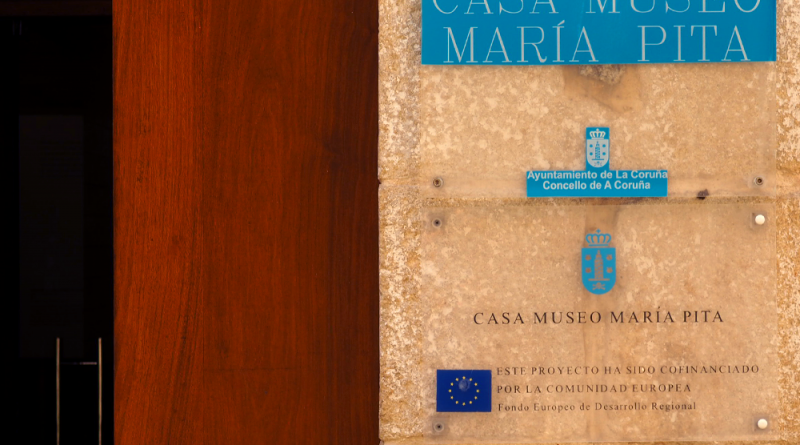 In the spring of 1589, Sir Francis Drake was ordered by Queen Elizabeth of England to destroy the remains of the Invincible Armada that had taken refuge on the northern coasts of Spain. In this context and with more than 150 ships and 23,000 men, on 4 May of that year, the English troops attacked A Coruña. What the British navy did not know at the time was that the people of the city would put up such resistance. Not only men, but also women and children were at the forefront of the battle and stood up to Francis Drake’s corsairs. Among this defensive contingent, the figure of a woman stood out, her name: Mayor Fernández de la Cámara y Pita, who, after a misunderstanding following the death of her sister, went down in history as María Pita.

After long days of fierce fighting for control of the town, the population took refuge behind the walls of the “Ciudad Vieja” (Old City) from where they put up great resistance. The enemy would end up knocking down these walls, but when everyone thought they had succumbed, María Pita, with a lance, killed the British ensign who was trying to lead the victory and, according to legend, snatched the flag he was carrying and, shouting “He who has honour, let him follow me!” she whipped up the spirits of the people of A Coruña, making the enemy flee. María Pita thus became an undisputed protagonist of the history of A Coruña and as such, today we offer you a tour through the city focused on the role of this local heroine.

We begin our visit in the Plaza de María Pita. The centre of this 10,000 square metre rectangular square, designed in the mid-19th century, houses the sculpture dedicated to our heroine. This bronze statue is just over 3 metres high and stands on a stone pedestal that is over 5 metres high, reaching a total height of over 9 metres. The work, by the sculptor Xosé Castiñeiras, represents the heroine of A Coruña holding in one hand the lance with which she killed the English ensign and with the other, the lifeless body of her husband who died in the battle.

This modernist building built between 1908 and 1912 occupies the northern front of the square. Inaugurated by King Alfonso XIII in 1927, it houses the administrative offices of the City Council of A Coruña. It has three floors and an attic. Its façade of Galician ashlar masonry with a clear French Renaissance style is 64 metres long and is made up of 43 windows and 15 arches, which serve as wide arcades. Carved in white stone on the front of the building are four statues representing the four Galician provinces: A Coruña, Lugo, Ourense and Pontevedra. On the upper part of the front we can see the city’s coat of arms and the inscription “very noble and very loyal city of La Coruña, head, guard and key, strength and antemural of the Kingdom of Galicia”. Entering the interior, the first floor houses the noble area, made up of several rooms as well as the Clock Museum and the Gallery of the Mayors. On this floor, the Mayor’s office, the councillors’ meeting rooms and the staircase of honour that connects the Mayor’s office with the Plenary Hall stand out. The first floor houses offices and offices. Finally, the attic is where the caretaker’s house used to be located. Of the three towers, the highest one houses the clock and the bells.

Under the rest of the porticoed buildings we will find various establishments, among which we can enjoy a good coffee on their terraces or the typical Galician gastronomy in their restaurants, taking advantage of the atmosphere of this charming square.

Leaving the solemn Plaza de María Pita behind, we will find the Old City. Characterised by its historic buildings and cobbled streets, this harmonious ensemble is well worth a visit. Living side by side with the hustle and bustle of the city, it opens a door to history. Through its buildings, now occupied by small shops, taverns and restaurants, we walk through these streets that will transport us through different historical stages from the Middle Ages to the 21st century. The old quarter of the city preserves the noble residences and mansions of the aristocratic families that inhabited the city. These include buildings such as the Palace of the Marquis of San Martín de Hombreiro; the family home of Emilia Pardo Bazán, today converted into a house-museum and which shares rooms with the Galician Royal Academy; the residence of the poet Rosalía de Castro and her husband, the writer Manuel Murguía; the Pazo de Cornide or the former mansion of the Counts of Montaos, today the headquarters of the Military Government.

Located at number 28 of Herrerías Street, this museum recalls the life of the illustrious heroine, whose heroic deed took place just a few metres away. The installations are divided into four rooms that offer a journey not only through the life of María Pita and the attack by the English, but also through the city of A Coruña at the time. Throughout the year, the ground floor of the house also hosts exhibitions on a variety of themes.

Continuing our walk through the streets of the old town we find numerous religious buildings, among which we can highlight the Church of Santiago, probably the oldest in A Coruña; the Convent Church of Santo Domingo, which although initially built outside the walls, was rebuilt inside the Old Town in the 17th century; the Convent and the Plaza de Santa Bárbara; the Collegiate Church of Santa María do Campo or the Church of the Third Order.

A visit to the Garden of San Carlos is also a must. It was first built in the 14th century as a defensive castle outside the city walls, and was joined to the city in the 16th century. This garden houses the tomb of the English general John Moore, who died in 1809 defending the city from attack by the French. The park has a wide variety of native species and other exotic trees, including two centenary elms. It also offers wonderful views of the city from its viewpoint.

Finally, we lose ourselves amidst memories of battles and times gone by, visiting the remains of the old walled city that our brave heroine defended. The fortified remains can be seen today through the bastion of San Carlos: an old bastion that formed part of the city’s defences; and the Castle of San Antón: built in the 16th century on a small rocky island and under the orders of King Felipe II, it acquired its current configuration at the end of the 18th century. It served as a prison until the middle of the 20th century and from 1968 to the present day it has housed the Archaeological and Historical Museum.