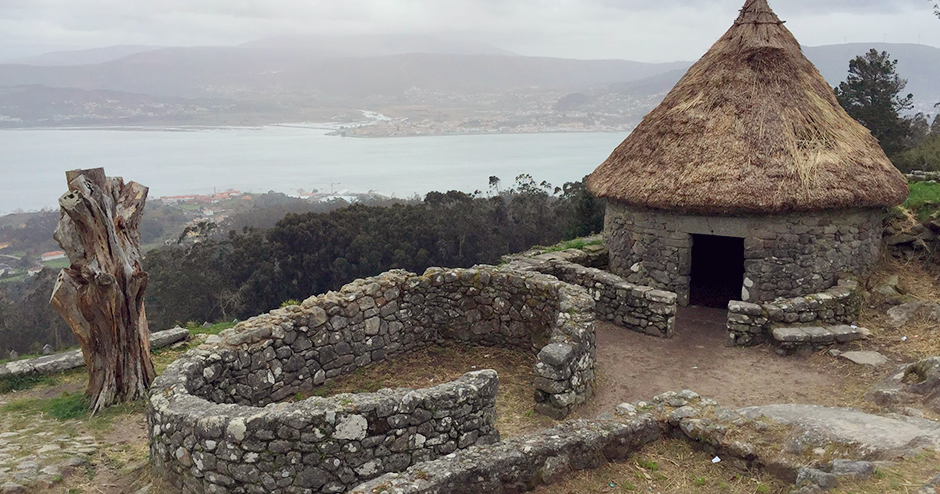 It has already been mentioned before in this blog that Galicia is a land fertile in magical mountains. Santa Trega, in A Guarda may well be one more. Located in the south-western end of the Community, it is a large vantage point on the mouth of the Miño, an elevated triangle of land enclosed on one side by the town, on the other by the river and beyond that  by the Atlantic Ocean. On its slopes, it also has one of the best known castros (pre-Roman settlements) in the area, a place where children and adults can easily learn what these villages were like.

The Santa Trega castro is in the middle of the climb between the town of A Guarda and the mountaintop. It must have been a settlement of some importance: it is estimated that between 3,000 and 5,000 people lived there, and although the area that can be visited today is considerable, most of the city remains buried.

The excavations began in 1912 with the help of wealthy emigrants, interested in the past of the town where they had been born, and still continue nowadays. Most of the buildings found date from the turn of the millennium, between the first century BC and the first one AD, although archeological  works have discovered that the fort was previously occupied, in the Neolithic period, and that it was inhabited until well after.

The abundance of houses with a round design speaks to the scant Romanesque influence it had at the time. The cabins were built on bedrock and had a main room, sometimes equipped with benches, and a small entrance patio. On many occasions, these houses are located around a larger patio, which may indicate that they belonged to the same family or unit. In addition to housing, researchers have located buildings that once served as storage (the village was essentially agricultural, as shown by the numerous mills found). Some of these constructions have been recreated to show how the population lived. Children will have a great time going in and out of these peculiar time machines.

Once you have visited the settlement, it is essential to climb to the top of the mountain. It can be done by car through a narrow but comfortable road, but it is also possible to do it on foot, following a beautiful via crucis that leads to the top and the Santa Trega hermitage. The church was built in the sixteenth and eighteenth centuries, although it has traces of previous eras. The via crucis is more recent, work of the Valencian sculptor Vicent Mengual.

At the top is the old restaurant, designed by the O Porriño architect Antonio Palacios and later converted into the area’s interpretation museum. There is also a viewpoint, the kind that takes your breath away, because it allows a 360-degree panoramic view of the Baixo Miño region and the north of Portugal. Right in the place where the waters of the river and the sea mix is the curious islet of A Ínsua, belonging to the neighboring country, in which a fortress still stands, a witness to the close vigilance between the two countries, today happily twinned.