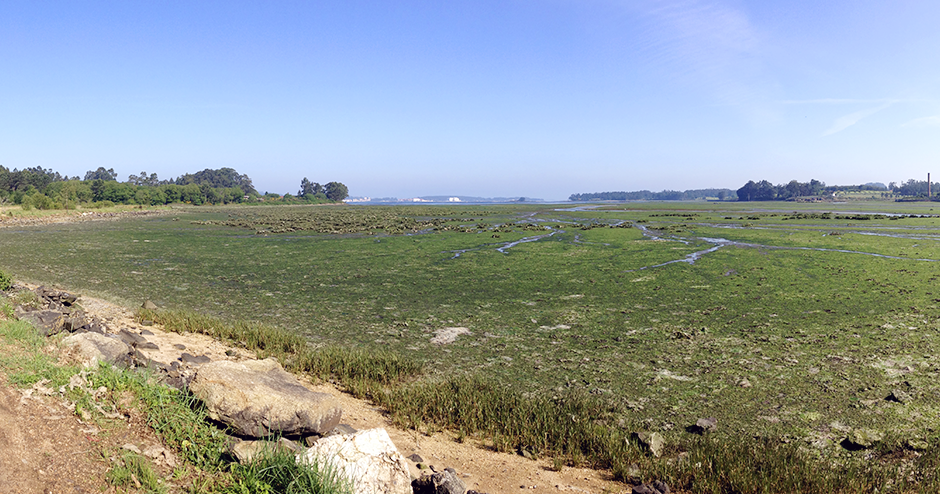 Between the nineteenth century and the first half of the twentieth, a protoindustrial activity gained much importance in the O Salnés region: the manufacture of roof tiles and bricks from the excellent local clay. Of the rudimentary factories of that time, called ‘telleiras’, there are still some very interesting remains left, useful to get to know the past of a region marked in recent times by the boom of tourism.

One of the most important places to understand this past is the ‘Telleiras’ Interpretation Centre, in Vilalonga. This parish is unique within Sanxenxo because, while the rest of the municipality borders the Pontevedra estuary, Vilalonga also opens its coast to the Arousa estuary. The Interpretation Centre is on this side, on a shallow inlet just opposite the island of A Toxa.

Recently restored, this is an old building where bricks and roof tiles were made. Several original granite ovens are still preserved, through which one can understand the process that was once carried out in these pre-industrial facilities. The process was complicated and required a lot of precision on the part of the worker, or ‘telleiro’. First a dough was made, mixing water and local clay, highly valued by builders. The clay was kneaded and smoothed time and again to give it a solid and uniform consistency, and then it was placed in a mold called “formal” to give it the precise curvature. It would still be some time before the tile was ready for the oven, because first it had to spend several days in a field under the sun waiting for the moment when it was hardened enough to support itself. Then, finally, it was put in the oven for no less than a whole week. It was only then that the work was considered finished.

Several things can be deduced from this process. Firstly, that the season with the highest ‘telleiras’ production coincided with summer, as heat was necessary for the pieces’ first drying. Secondly, that the work days were long and arduous. Both men and women, often temporary workers, were engaged in this trade. The fact that the ‘telleiras’ were built by the sea also tells us much about the main form of product distribution, on ships that travelled the coast from the factory to the client. Another area of ​​southern Galicia, O Rosal, was also a point of reference in the development of these basic construction elements.

In fact, facilities of this type were abundant all along this stretch of the coast. In the Castrelo parish, in the Cambados municipality, also facing A Toxa, several clay ovens were restored. They are linked by a trail that can be done on foot or by bicycle, supplementing the more common sun-and-beach plan that so well matches the region’s climate.

Most of these factories closed more than forty or fifty years ago, and their structures are used nowadays for touristic purposes and the recovery of ethnographic heritage. Between Cambados and O Grove the craft was not lost completely, since several modern factories are clustered in this same stretch of coast, dedicated to the manufacture and sale of this type of construction materials.

Monte da Lagoa, in Narón, hides places that transport us to remote times. The megalithic complex of Pena Molexa invites us to think about ancient funeral cults and the Lenda da Moura, a legend that has inspired a popular celebration 🧙‍♀️ #Sentidiño #Narón pic.twitter.com/LEDdqTSE9D