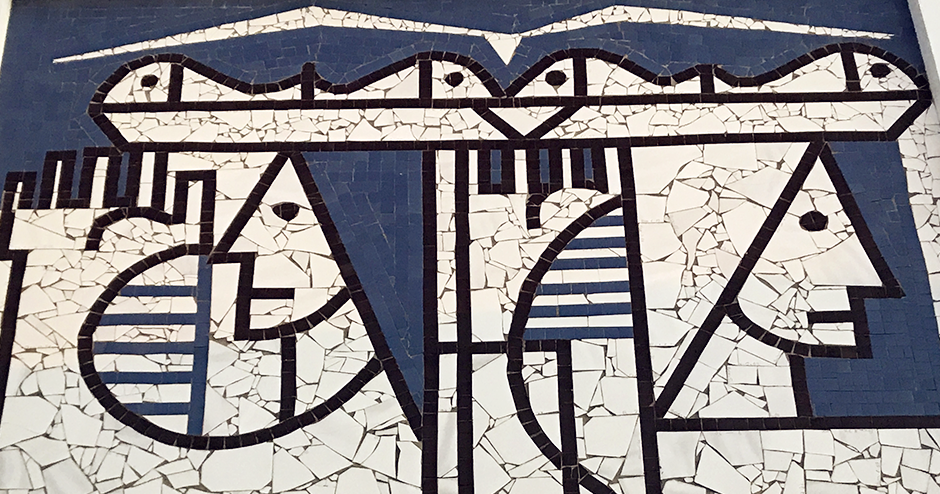 (And you live in my world, my land,

cradle of my lineage,

Galicia, sweet grief of the Spains,

Lying at sea level, that road …)

Thus ends ‘Deitado frente ao mar’ (‘Lying in front of the sea’), one of the best-known poems by Celso Emilio Ferreiro, in which the Ourense poet reaffirms his love for Galicia’s land, its language and its past. The last of those phrases is the protagonist of one of the best-known places of the town of Foz, in Lugo, as part of a beautiful mural in the heart of the city.

Foz is a small fishing town located in the centre of A Mariña, between Burela and Ribadeo, at the mouth of the Masma River. The municipality has around ten thousand residents and has been one of the best-known tourist destinations in the area for decades. It is not lacking in attractions. Its coastal strip is in the so-called Rasa Cantábrica, a relatively flat area by the sea made out of slate-type rocks. This makes it a territory especially rich in wide, beautiful beaches. In the case of Foz’s 25 kilometres of coastline, many of those beaches are among the most popular for seafaring summers: A Rapadoira, located at the heart of the old town area, or Llas, very close to it; A Pampillosa, at the mouth of the Ouro River, in Fazouro; Arealonga, open to the Cantabrian sea; or Os Alemáns and Areoura, already bordering with the neighboring town of Burela.

Foz was, for a long time, an important fishing port. This is the past that was meant to be honoured with the mural, which is located on the riverbank, across from the small dock. It is located at the foot of the Santiago de Foz church, a small temple of seafaring style that presides over the old town center. Several of the surrounding streets retain all the charm of old-time towns, with their low houses, some of them with balconies, on narrow roads linked to one-another.

The mural conveys the influence of the Sargadelos ceramic factory, located in Cervo, a town very close by. It portrays half a dozen sailors and three shellfish gatherers clearly straining to transporting Celso Emilio’s verses. The work is holds a central place in a very important urban area, an area for recreation and tapas that is very busy at night. In addition, the mural has an almost secret “cousin” located very close by: at the entrance to the dock’s parking lot, on the wall of one of the service buildings, two fisherwomen made out of white, black and blue ceramic carry on their heads a basket filled with fish, in a modern work of art filled with love for the past.

Although it is a coastal town, it is important not to forget the municipality’s attractions inland. Foz has one of the most beautiful churches in Galicia, the San Martiño de Mondoñedo basilica, of pre-Romanesque origin and very pronounced buttresses. If possible, you shouldn’t miss the interior and the stone altarpiece behind the altar, a medieval gem without equal. Also in the municipality, in the Santa Cilla do Valadouro parrish, stands a castle at  the peak of A Frouxeira … or rather what little remained of it after it was razed in the late fifteenth century by the Catholic Monarchs’ troops.