O Ribeiro is situated in the most western part of the province of Ourense, in the confluence of the Miño, Avia, Arnoia and Barbantiño River valleys. This location is what singles out these lands and gives them and outstanding natural beauty. O Ribeira has been very active from ancient times, proof of this is the existence of Roman roads, gold panning sites, etc.; the first documented citations that define it as a distinguished region are dated on the year 928. Since the Middle Ages, this land and its people have been intimately linked to wine farming and the production of their characteristic wines, being the principal reference of wine-producing of the Christian kingdoms since the IX century till the 17th. This territory is considered one of the sites most representative of Galician architecture, and boasts a beautifully preserved artistic heritage. In its medieval villages you can visit forts, jewish quarters (Ribadavia, with its Festa da Istoria in August), Manors (Pazos de Arenteiro), monasteries and churches perfectly integrated with the landscape of water and wine.

The Pre-roman, Romanesque, Baroque, and Modern times, combine in O Ribeiro between the nobility of its granite and the spirituality of its culture. The Ruta do Viño do Ribeiro resources offer a wide range of possibilities to enjoy the visit. The hiking routes lets us get to know natural monuments like Pena Corneira or admire the rich heritage that the different architectural styles have left us. We can take pleasure in practicing water sports, sail on catamaran among vineyards or relax and take advantage of the beneficial properties of the hot springs.

The D.O. has an extension of approximately 6,67 acres of vineyards located in the municipalities of Ribadavia, A Arnoia, Castrelo de Miño, Carballeda de Avia, Leiro, Cenlle, Beade, Punxín and Cortegada, and in part of Boborás, San Amaro, Toén, Carballiño and Ourense. The vineyard extends itself from 75 to 400 metres of altitude along valleys and slopes sometines very high, saved by the terraces, that are called here “socalcos” (barricade) or “bocarribeiras” (hillside, slope), that follow the contour.

Having a climate with an Atlantic influence, the mild temperatures and a significant rainfall, they farm preferently white grapes like Treixadura, followed by Loureira, Torrentés, Albariño, Albilla, Godello and also the foreign ones like Macabeo and Palomino. In red ones the preference is Caiño, complemented by the Ferrón, Sousón, Brancellao, Mencía, Garnacha and Tempranillo. The vines are raised a little higher so the fruit is not in contact with the soil. The white wine of O Ribeiro is a clean and transparent wine, with a subtle smell, exquisite fragrance of flowers and fruits; the red wines are alive, with a cherry red jewel tone, intense on the nose and broad and expressive in your mouth. 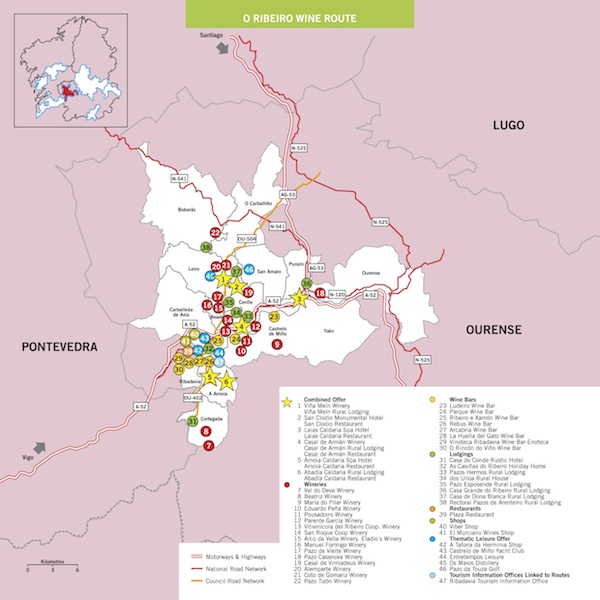