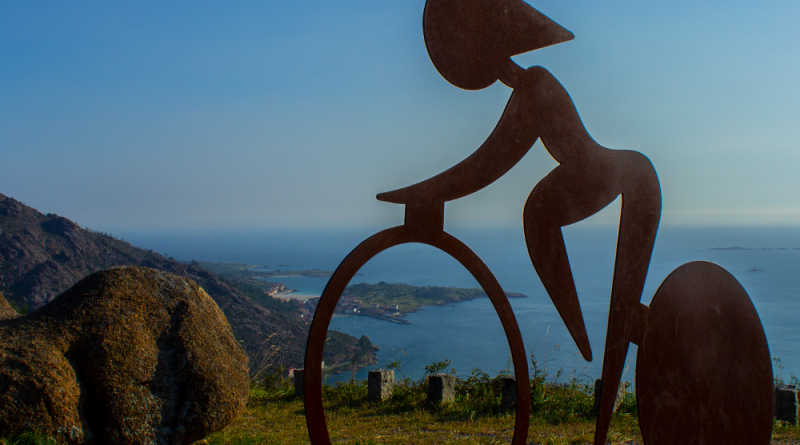 There are many reasons to go to the Coruña municipality of Dumbría and enjoy one of its most emblematic places: O Ézaro. The silhouette of a legendary summit (Monte Pindo) that rises on the other side of the Xallas river bed, the spectacular waterfall that this river draws to meet the Atlantic Ocean drawing a unique landscape in Europe, and the views from another mythical place (that of Cabo Fisterra) have become this place one of the main poles of attraction for visitors who go to the Costa da Morte.

In addition, in recent years the place has become a pilgrimage mecca for cycling fans, who do not want to miss the opportunity to step on the stage of the feats carried out by professionals of the sport on the ramps that ascend to the viewpoint of O Ézaro. With just two kilometers in length, but with an altitude difference of almost 270 meters, the viewpoint road has an average slope of around 15% and reaches a peak of almost 30% at its most dramatic point, which means that even the More experienced athletes have to push their bodies to the limit to avoid hitting the ground with their feet.

It was in 2012 when the Vuelta a España entered the overwhelming dumbrian ascent for the first time and it was then that the summit inscribed its name on the podium of the great cycling summits. Joaquín Rodríguez inaugurated his record by imposing himself on three myths of world cycling (Alberto Contador, Alejandro Valverde and Chris Froome) and demonstrating that standing out in O Ézaro is only within the reach of a select few. A year later, the cyclists returned to that same stage, and although they did not stop there since the stage continued to Fisterra, they did leave images to remember. And three years later the Vuelta again chose O Ézaro as the goal of a day as much awaited by the public as feared by the peloton. Valverde and Froome made themselves noticed again, but they could not reach the Frenchman Alexandre Geniez or the Murcian Rubén Fernández, first and second respectively, who took advantage of the first few pedals of the Vuelta that year to find their bit of glory.

This year, the coronavirus pandemic has forced the dates of the Vuelta to be delayed, but the layout of the stages has not changed, so the peloton will visit Dumbría again in search of a new winner for a summit that Geniez himself defined after his triumph in 2016 as “a little Alpe d´Huez” thus twinning O Ézaro with one of the most mythical mountains of the Tour de France and world cycling. It will be on November 3rd when the cyclists face the O Ézaro ramps again. This time they will do so in an individual time trial format and the Dumbriés viewpoint will be the finish for a 33.5-kilometer-long stage that will start in Muros.

In addition, under the interest generated by the Vuelta and the celebrity that took the place, another cycling competition was born, in this case of a popular nature, which has also contributed to strengthening ties with the sport of this area. Since 2015, the Gran Fondo Ézaro has been bringing together more than a thousand cyclists every year to travel the roads of the Costa da Morte and dare with the viewpoint ramps. Fans from all over the country and from many other places have taken part in a test that has also caught the attention of great cycling figures already retired from professional practice. Miguel Induraín, Claudio Chiappuchi, Alex Zülle and Tony Rominger are some of the bicycle stars who relived in O Ézaro scenes and duels that are already part of the history of that sport.

But those of the Vuelta and of the Gran Fondo Ézaro are not the only bicycles that visit the area. Many people want to take a close look at the steep slopes of O Ézaro and numerous amateur cyclists dare to try to emulate their idols at any time of the year. The municipal officials themselves noted the impact that promotion through cycling had had on the arrival of tourists to Dumbría, detailing that between 2012 and 2018 the number of people approached by the local office of tourism went from 2,000 to 80,000.

O Ézaro is no only synonymous with unparalleled landscapes, but also with sport, effort and the ability to excel. This is also confirmed by the sculpture placed in the vicinity of the viewpoint and which reminds us that bicycles are, in their own right, one more inhabitant of the place.