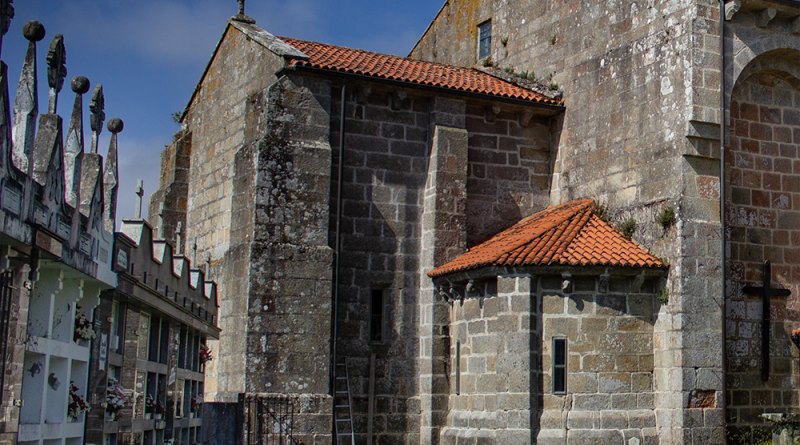 The Costa da Morte is a land rich in places brimming with history and heritage. But few can match the place of Moraime and more specifically its church of San Xiao, a temple located in the municipality of Muxía that has been witness and protagonist of the passage of pilgrims, kings and pirates, and whose stones and surroundings continue to reveal secrets that go back even two millennia in time.

The church, considered to be one of the masterpieces of Romanesque art on the Costa da Morte, was built in the 12th century and was part of a monastery that no longer exists, of which there are references from the beginning of the last millennium. The hostel in the old rectory, built in the 18th century using part of the remains of the monastery, is what remains of the monks’ old home.

The early days of the settlement were complex and the place soon became the target of various attacks, as the chronicles of the time record. First the Normans, in 1105, and shortly afterwards the Saracens, in 1115, caused considerable damage to the site in an attempt to get their hands on its riches. But the Count of Traba, and above all King Alfonso VII, made its reconstruction possible and laid the foundations for the splendour it would enjoy for several centuries.

The monarch’s attentions towards Moraime were not the result of chance or whim, but rather have to do with a historical episode that took place there and which was key in the dynastic struggles that took place in the 12th century. Moraime was the place chosen by Pedro Froilaz, Count of Traba, to hide and protect the young Alfonso Raimúndez, the future King Alfonso VII, from the power games brought about by the second marriage of his mother, Urraca I. After the death of Raymond Burgundy, her first husband and father of the future king, Urraca I had married Alfonso of Aragon, the Battler, which aroused the fear that he would decide to get rid of anyone who might oppose his claims to the throne and the rights of his offspring. The Count of Traba then proceeded to hide the future Alfonso VII in Moraime while the dispute, which would continue for several decades and in which the Galician nobles and the Compostela bishop Gelmírez would also play important roles, took its first steps. A few years later, now far from Moraime, but still immersed in the confrontation with his stepfather, Alfonso VII made important donations for the reconstruction of the monastery in whose cells he had found shelter.

In one of the privileges granted to the monastery and its abbot, the monarch also emphasised the role that the place played in the care of pilgrims on the Way to Santiago de Compostela. Located a few kilometres from the sanctuary of Nosa Señora da Barca, Moraime was then and still is today an obligatory stop-off point for those who, having reached Compostela, decide to continue their route to Muxía and Fisterra.

Moraime also benefited from the protection of the descendants of Pedro Froilaz and the successor of Alfonso VII, King Fernando II, whose donations and privileges also contributed to the rich heritage of the monastery and the church. On the main façade of the church we can still contemplate its beautiful portico, in which experts have identified similarities with the famous Pórtico de la Gloria of the cathedral in Santiago de Compostela. And on the south-facing side, a walled-up doorway was recovered in 1978, on which a unique representation of the Last Supper can be seen, in which some diners are missing. This portico is not the only treasure that Moraime had kept hidden. In the 1970s a valuable mural painting was also discovered, painted directly on the stone, depicting the seven deadly sins and death. It is estimated that these frescoes date from the 16th century and that they were used by the monks to preach and get their message across to the inhabitants of the area. Their production would also be another of the consequences of the cultural exchanges brought about by the Way to Santiago de Compostela, since experts have identified the influence of the Flemish Gothic style in the murals and have attributed this to the trends that crossed Europe on the pilgrimage routes to Compostela.

But the importance of Moraime in local history is not limited to the monastery and the church of San Xiao. Before the monks decided to settle there, other people had occupied the same space. Excavations carried out half a century ago led to the discovery of a Roman settlement when the remains of the heating system of a villa were identified. During that work, several tombs from the Germanic period (7th and 8th centuries) were found, and new excavations in the area carried out in recent years have brought to light older burial sites from the 4th and 5th centuries, as well as more remains from the Roman period, such as amphorae.

Only time will tell how many secrets and treasures from the past remain to be discovered in Moraime.