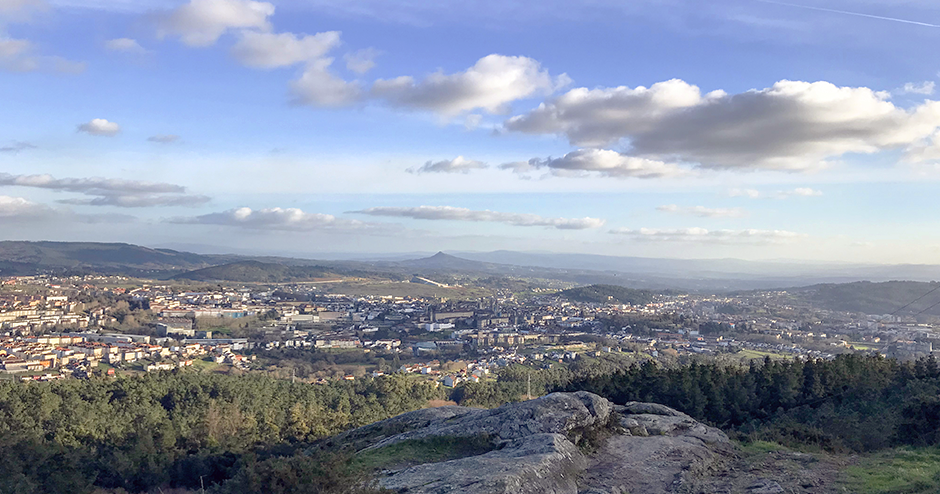 They say that from the heights is where the beauty of the cities is best appreciated. Here are four locations in Compostela from where you can see the city or the lands that surround it.

Monte Pedroso
This is the most popular viewpoint to watch the city of Compostela up close. It is located in the northern part of the city and can be accessed, from the centre of Santiago, crossing the historic Carmen neighbourhood and then braving a few kilometres uphill where it is common to find cyclists training on the ramps. At the base, O Pedroso homes the Granxa do Xesto park, with extensive meadows, a park and a cafeteria to spend a nice weather afternoon. At the top, the view is probably the best one can have: with the Cathedral at the center, Santiago shines as it fills the valley, with the imposing shape of the City of Culture behind it and beyond, the Pico Sacro, as a backdrop.

Monte de Deus
Yet another balcony above the city, not often visited and that presents a view of Compostela very different from the usual one. The Monte de Deus is a viewpoint located in the northern part of the city, on the higher parts of the Guadalupe and Vite neighbourhood, renovated a few years ago to enjoy a different panoramic view. The city centre is fully seen from either of its two platforms, with all its historic buildings crowning the promontory of the old Libredón, specifically the San Francisco mass and the monastery of San Martiño Pinario. Before them, the northern neighbourhoods.

Monte do Viso
To the south of the city, Monte do Viso offers a view of the city similar to what pilgrims see when they arrive at Monte do Gozo. In fact, this elevation stands between that point and the centre of Compostela, just above the City of Culture. It can be reached through a very steep stone path and at the top there is no more infrastructure than a wind-battered geodesic vertex, but the view is worth it.

Monte da Agrela
A little-known viewpoint worth visiting is the Pena da Agrela, in the parish of Lampai in the municipality of Teo, bordering Compostela. From its crags (the climb can be done by car almost all the way to the top, but it is quite steep) you can not see the centre of Santiago, but you can see the valleys that surround it and even the town of A Estrada, to the south. The big surprise comes when you turn your eyes to the south west: in a straight line you can see the entire mouth of the Ulla, quite an imposing view, a snake line that ends in the Ria de Arousa. In fact, on clear days, it is possible to distinguish the Illa de Arousa from here. The closest elevations have a lot of history: straight ahead you can see, for example, Castro Valente, which once had a watchtower to guard against invasions by sea.