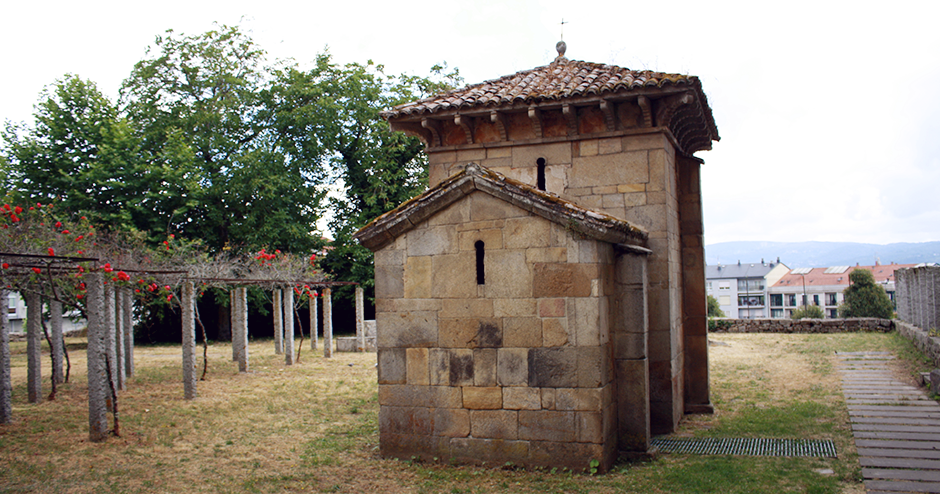 The town planning of the old part of Celanova has revolved for centuries around the Monastery of San Salvador, as has life in this important town in the province of Ourense. The construction of this building, huge, majestic, began in the sixteenth century, but the works were prolonged for centuries, providing it with a balanced mixture of styles. Most of it was built, however, in the seventeenth century, and so Baroque is its main style. This is not the original monastery, since the first one was erected at the beginning of the tenth century by Saint Rudesind.

Headquarters of the ecclesiastical power for centuries, much of the town’s cultural life still revolves around it nowadays. Its sober and elegant facade holds a secret that those who enjoy learning local history will like to discover. To the right of the main entrance is painted, with a brush and black paint, “Adiante Semanario” (“Forward Weekly”). It could seem like a prank made days ago, but the truth is that it has been there since 1933 and refers to a short-lived magazine sponsored by intellectuals like Pepe Velo or Celso Emilio Ferreiro. The latter, one of the great authors in Galician language, has a bust a few dozen meters further, also attached to the walls of the monastery.

The large monastery holds in its back area a treasure, small in size but large in appeal and historical interest. It is the San Miguel chapel, built before the change from the first to the second millennium.

It is, therefore, a pre-Romanesque building, designed under the influence of Mozarabic art. This style is easily recognizable by the horseshoe shape of its arches, so typical of Islamic architecture. Not for nothing the small church (its interior surface is little more than 20 square meters) was built in the middle of the tenth century.

The walls are very thick and upon visiting it one can see how small the interior space is, divided yet into three tiny rooms. The central body is somewhat higher than the apse and the anteroom. On the outside are the very characteristic modillions supporting the roofs and the tall and narrow windows. An inscription over the door, made at the time of construction, asks visitors to pray for a sinner named Froilán.

Any time is good to visit this pre-Romanesque jewel, but if you can choose, the ideal date is in one of the equinoxes, that is, on the first day of spring or the first day of autumn. The church is oriented in such a way that the first rays of light on those days traverse lengthwise the building’s slender windows and create a fabulous effect in the back : a six-pointed star of light seems to emerge from the chapel. It is common for large groups of people to gather on these dates to watch the visual effect; the exact point on which to stand is marked on the garden floor.

Surroundings San Miguel there are, by the way, vestiges that indicate that the area was a place of worship long before the oratory was built, since one of the stones on the garden could have been used in ancient times to worship the sun.