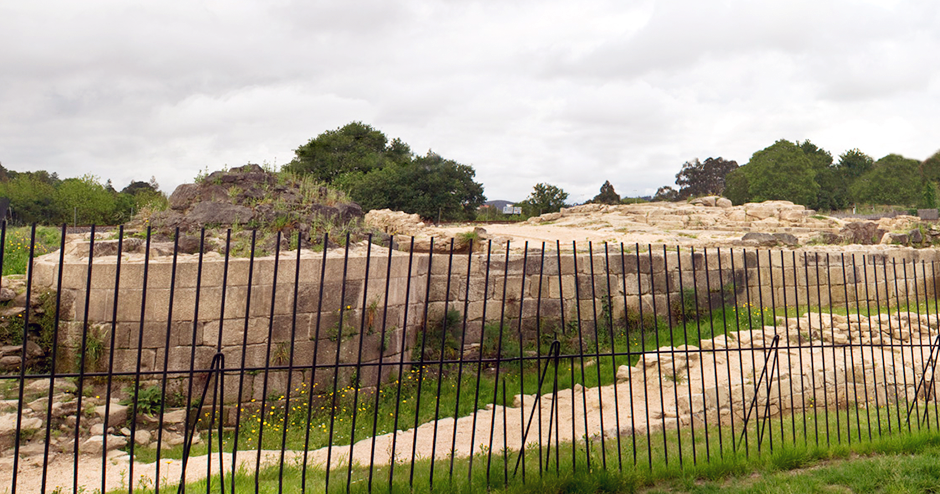 There is a castle on the outskirts of Santiago de Compostela that was forgotten for centuries. And it was not just any castle: A Rocha Forte castle was probably the largest of its kind in Galicia and its purpose was to protect both the Portuguese Way and occupant of the episcopal chair in the city of the Apostle.

The importance of A Rocha Forte is still easily explained by its location. It is situated at a crossroads that is still one of the busiest in the city, at the southern exit to Pontevedra and the estuaries. However, such a formidable construction is not easily seen by the naked eye and, for hundreds of years, it was little more than a memory even for the city dwellers. In recent years excavations have taken place and the ruins of the fortress have revealed an exciting history of battles and, also, great violence.

Built in the thirteenth century and extended in the fourteenth, products coming from the ports near Santiago (Padrón, Noia, Pontevedra…) were monitored from A Rocha Forte and the corresponding tariffs were collected. The building grew to have four stories and some formidable defences. The reason was its use by the archbishops as a refuge in case of revolt of the always boisterous compostelanos. Without going any further, the famous Berenguel de Landoira, in charge of the construction of the clock tower named after him, had to hide himself there in the early fourteenth century when the people of Santiago rebelled against his appointment. Sly, he called the revolutionary leaders to parley at A Rocha Forte and there, with little diplomacy, executed them.

In 1467, during the Irmandiña War, the castle was besieged, seized and razed. A visit to the current site brings to mind the enormous cruelty of that confrontation, in keeping with the practices of medieval war. Inside what remains of the castle (the outline of the walls is perfectly visible after the excavations) you can see a large number of rounded stones, balls of up to 150 kilos in weight that, in the fifteenth century, were catapulted into the tower from the surrounding hills using large war machines. If we add to these lethal stones bales of burning straw, decomposing animals and other types of projectiles, we will understand why A Rocha Forte was finally subdued and destroyed.

The castle was abandoned at that time and, with the passage of time, forgotten. In the nineteenth century the railway line passed over one of its wings; the first excavations date from that same century, but it was not until the twenty-first century that its study and restoring began as part of the fascinating history of Compostela.

The castle of A Rocha Forte is located next to the Viaduct of A Rocha, at the southern exit of Compostela. It is worth it to visit in the company of experts by scheduling visits on the resource’s website.