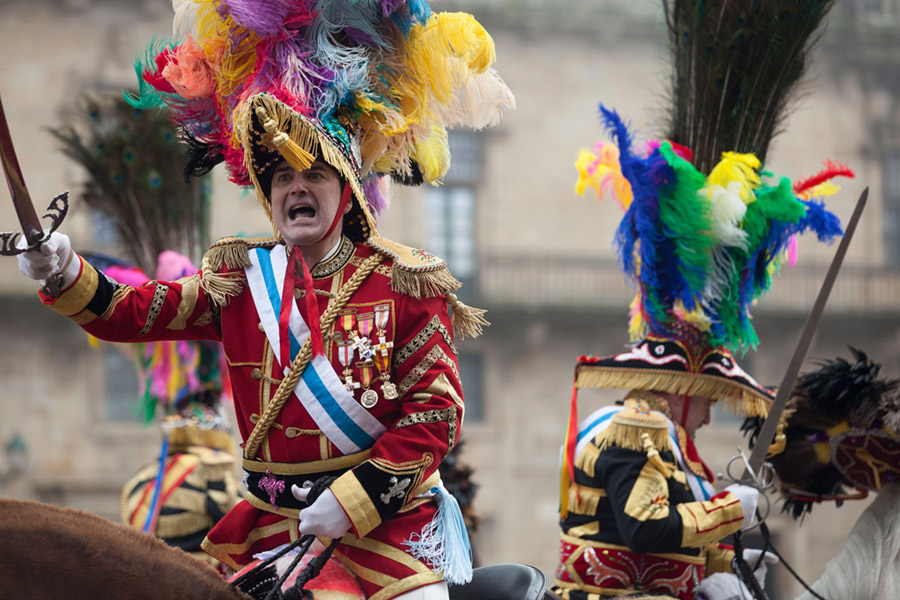 The Entroido is one of the most traditional, popular and ludic festivals in Galicia. It is celebrated in much of the world, although only in a few places it maintains traditions as particular and ancient as in the Northwest. Here, we can find many different Entroids with unique characters, which announce the fun of the days before Lent.

The Carnival or Entroido is a festival of pagan origin, which celebrated the end of the winter. Adapted as far as possible to the Christianism, the days of Entroido became the last days of revelry before the entry into Lent (the name Entroido comes from the Latin word Introitus, “entry”). As according to the rite of Christianity, in the forty days prior to Easter you can not eat meat (among other things), the days of Carnival are characterized by large banquets in which pork and other gastronomic delights abound (Carnival comes from caro, carni, “meat”).

It’s a party of local meaning. Many towns and villages have their own carnival traditions and customs. Of course, all these different Entroids share aspects such as the mockery, rebellion, the party, and the good and abundant food.

Among the most well-known carnivals in Galicia are the Entroidos de Xinzo de Limia, Verín and Laza, which make up the “triangulo máxico” of the Galician Entroids. These three villages in the south of the province of Ourense have the most famous emblematic characters of Galician Entroido: the pantallas of Xinzo, the cigarróns of Verín and the peliqueiros of Laza.

The pantallas are characterized by their masks with demon with crest face and by the balloons of a cow’s bladder that strike making the annoying noise that identifies them. They are in charge of animating the Entroido of Xinzo, one of the longest in Europe and perhaps in the world, with a duration of five weeks. In addition, it is the only Galician Carnival recognized as a festival of international tourist interest.

The characters of the other two Entroids of the “triangle máxico” are very similar in their dress and mask. Thus, both peliqueiros (Laza) and cigarróns (Verín) wear an extravagant costume and a smiling mask, on which they wear a miter in which animals from the area are painted. Both carry whips with which they hit and bother the neighbors of these localities.

Although these three characters are the most emblematic of the Entroido in Galicia, it is true that they are not the only traditional figures of Carnival. Some of the many other carnival characters from the Galician towns and villages are: os boteiros de Viana de Bolo and Vilariño de Conso, the Madamas and the Galáns of Cobres (Vilaboa), the xenerais do Ulla, the felos (relatives of the peliqueiros and cigarróns) of Maceda, or the “mazcaras” of Manzaneda.

Thanks to the increase of tourist importance of the Galician Carnival in the last years, traditions and customs that had been forgotten for a long time are being recovering. Nowadays, the diverse Galician Entroido is in good shape and mixes the ancestral rites with the tasting of the gastronomic products of each area, in an old but modern and popular party.