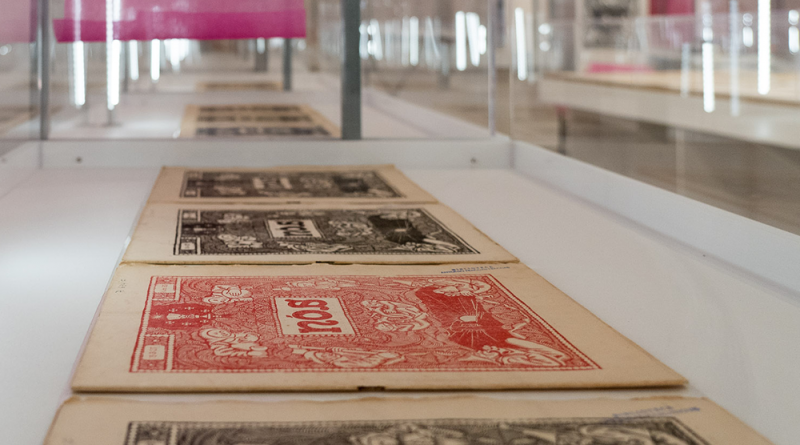 The 30th October 1920 is a date already written in gold letters in the history of Galician culture. On that day the first issue of the magazine Nós was published in Ourense, a project that gave voice and channelled the concerns of some of the main Galician thinkers of the 20th century, who have been grouped together since then under the name of Xeración Nós. Their history, their legacy, the role they played in opening up Galician culture to the world and the process of development, renewal and internationalisation of that culture and the Galician language now serve as the guiding thread of “Galicia. De Nós a nós”, the great exhibition that can already be seen in the City of Culture of Santiago de Compostela.

More than 300 pieces make this exhibition the most extensive and ambitious project dedicated to the Xeración Nós to date and also make it one of the main Galician cultural events this autumn and winter. It also takes over from “Galicia. Un relato no mundo” to become the second major exhibition that will serve as a prelude to the celebrations of the upcoming Jacobean holy year, Xacobeo 2021.

A total of 60 institutions, entities and companies, both public and private, have collaborated by providing the materials (some of which came from Germany, France and Portugal) that are brought together in a proposal that does not renounce combining pieces of great historical and artistic value with the most current interactive elements. All this to offer the spectator a journey that will allow them to know the identity and the concerns of the members of the Xeración Nós, the germ of the project that they set in motion, the elements that called their attention and that became the object of study and reflection, and the echoes that that pioneering initiative had and still has in Galicia.

The design, already an icon of Galician culture, which Castelao devised as the image of the magazine and the 134 covers that were published during its 17 years of existence share the exhibition space with emblematic pieces such as the spectacular Geographical Map of Galicia drawn up by Domingo Fontán in the mid-19th century; the suitcase of the Royal Galician Academy that kept the poem Os Eoas de Pondal; the album Nós de Castelao; the sculpture dedicated to the Apostle Santiago that is kept in the French Museum of Morlaix; or the flag and the coat of arms of the Council of Galicia used in the funeral of Castelao.

The pieces on display have been grouped into five sections that help to make a chronological and thematic journey through the exhibition: Galicia and the world before Nós; Nós, the protagonists of a generation; Nós, the history of an idea, a magazine; Nós, the contents, and From Nós to us. And the seven great representatives of the Nós Generation will accompany visitors on their journey through the entire exhibition: Alfonso Daniel Rodríguez Castelao, Antón Losada Diéguez, Arturo Noguerol, Florentino López Cuevillas, Ramón Cabanillas, Ramón Otero Pedrayo and Vicente Risco.

In addition, visitors have an interactive search engine at their fingertips to locate the most important articles in the magazine, as well as its most prominent contributors and the most recurrent topics. The Roman camp Aquae Querquenae also plays a distinguished role in the exhibition. Its remains, located in the Ourense municipality of Bande, were first excavated by Florentino López Cuevillas. The layout of the camp has inspired the spatial distribution of the exhibition and is also the axis of another of its main attractions: a recreation through augmented reality that will allow the visitor to go into the streets that two millennia ago the Roman legionaries trod.

Alfonso Vázquez-Monxardín Fernández, professor at IES As Lagoas in Ourense and member of the RAG, and Ana Acuña Trabazo, professor at the Universidade de Vigo and researcher, are the curators of the exhibition, while the designer, infographer and illustrator Álvaro Valiño is responsible for its graphic section. After their stay at the Museo Centro Gaiás of the City of Culture, which will last until 17th January next year, “Galicia. De Nós a nós” will begin a tour that already has two confirmed stops: the Marcos Valcárcel Cultural Centre in Ourense, from 18th February to 4th April, and the Pontevedra Museum, from 6th May to 11th July.

If you want to access more information about the exhibition, sign up for guided tours, learn about the security restrictions caused by the covid or download promotional materials you can do so by visiting the website https://www.cidadedacultura.gal/es/evento/galicia-de-nos-nos