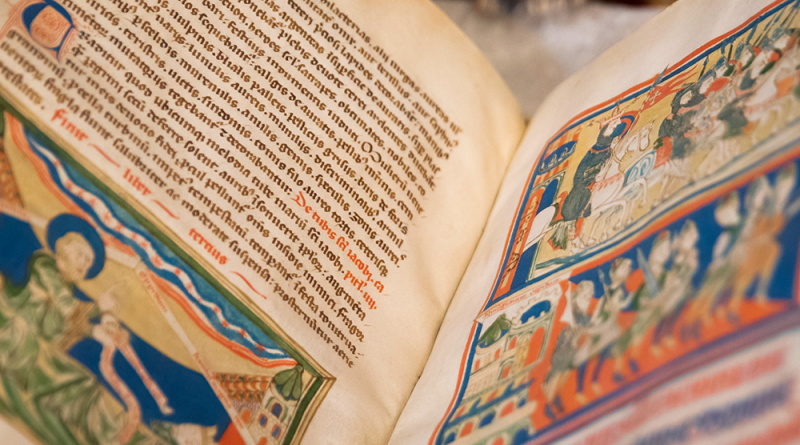 What literary work includes the first known mention of Breogán? What was the most important building in Europe in the Middle Ages? Who was the first female writer of the Peninsula? These and many other questions are answered “Galicia, a story in the world”, the exhibition that can be seen currently in the Gaiás Center Museum, City of Culture, Santiago de Compostela. This is the first exhibition promoted by the Ministry of Culture and Tourism because of the preparations for Xacobeo 2021.

The exhibition, which may be visited until April 12th puts Galicia under the spotlight, highlighting the interaction of this land with other places in the world. It is structured in four parts (myths, stories, memories and lives) and brings together 300 pieces from 8 countries and 3 different continents. Some of them is the first time they can be seen in Galicia. Below you can meet some of the most outstanding works.

Sawley map. It is one of the most important pieces of the exhibition and comes from Cambridge. It allows us to verify the relevance that the city of Santiago de Compostela had in the Middle Ages. This work, dated at the end of the 12th century and considered one of the first encyclopedic world maps of Europe, places the cathedral of Santiago as the most important building on the continent, representing it in a larger size even than the basilica of San Pedro (Rome). 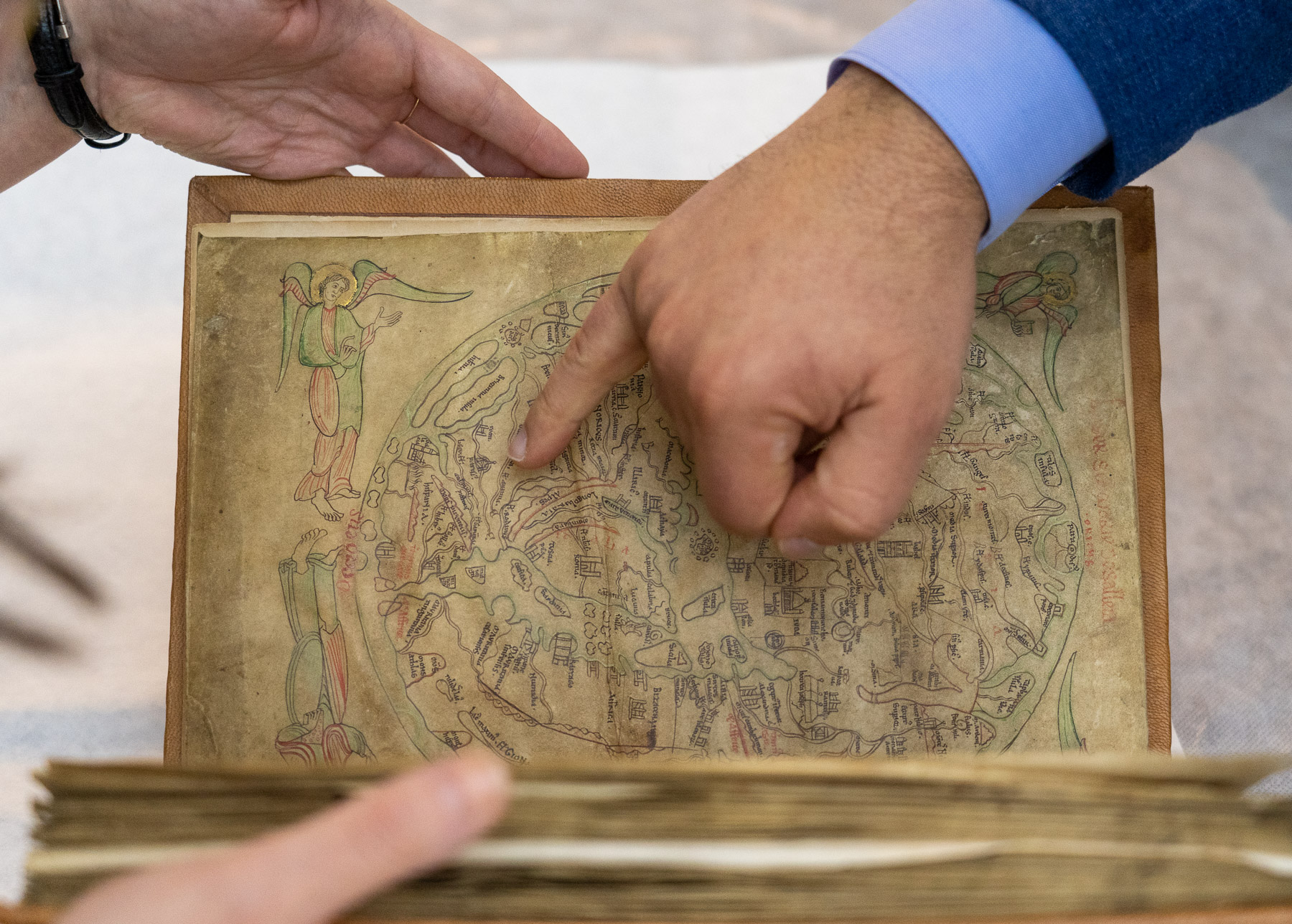 The book of invasions. From Ireland, more specifically from Trinity College in Dublin, a contemporary work of the Sawley Map arrives in Galicia and links directly to these two countries of Celtic tradition. The book of invasions narrates the different conquests that Ireland was subject to according to its ancient mythology and includes the first mention to Breogán. In addition, the book tells that the legendary leader erected the Brigantia Lighthouse, a city identified with A Coruña, and that it was the place from which one of his sons first spotted Ireland. 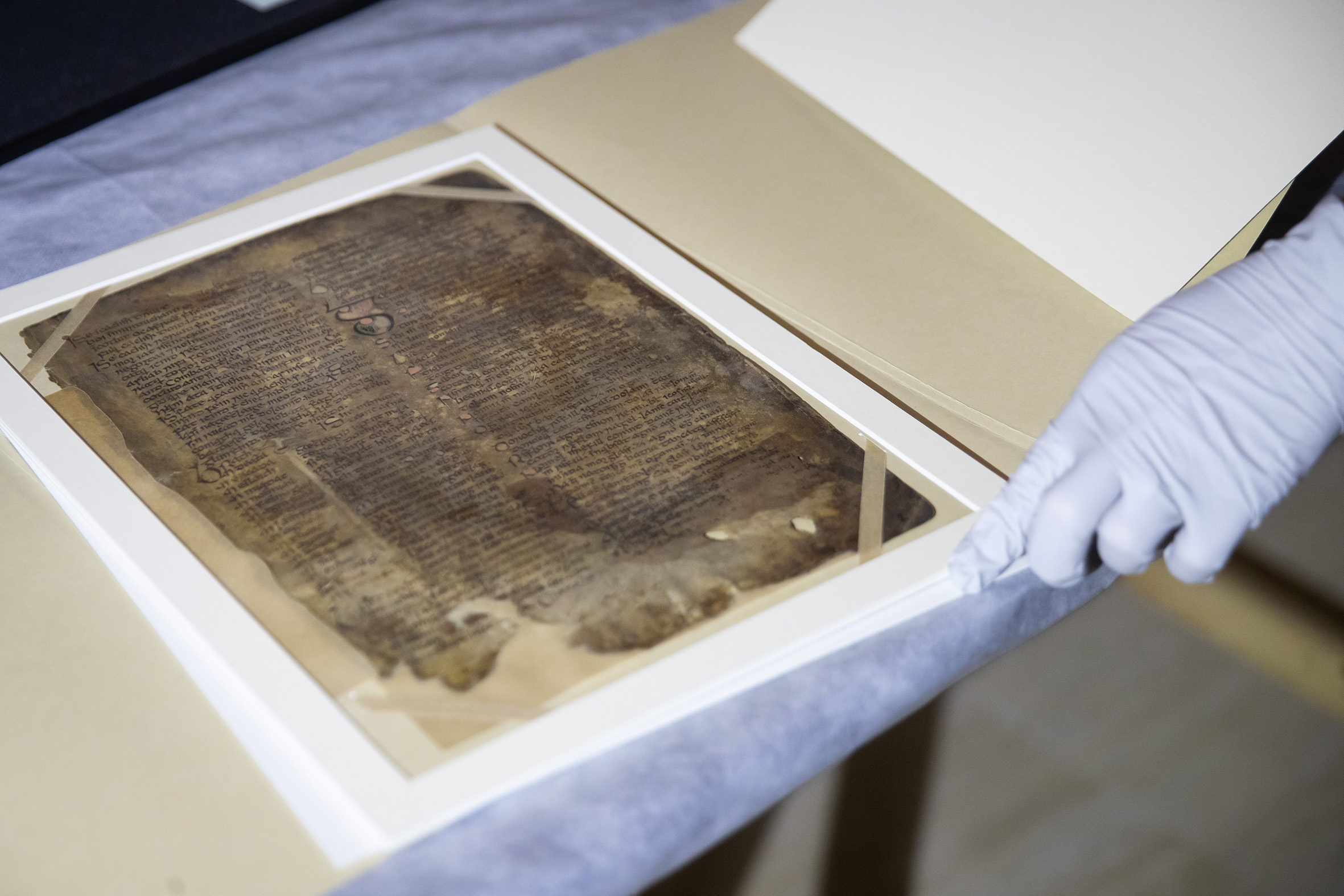 Kennicott Bible. Unlike the previous two pieces, this is not the first time that the Kennicott Bible is in Galicia. It was here (in A Coruña) where it was made in 1476 on behalf of a Jewish merchant who a few years later would have to leave this land by the decree of the Catholic Monarchs that prohibited that religion. The Bible then began a journey through various territories and remained missing for several centuries, until it was located and acquired by the University of Oxford. Now, more than 500 years after its departure, it returns to Galicia. 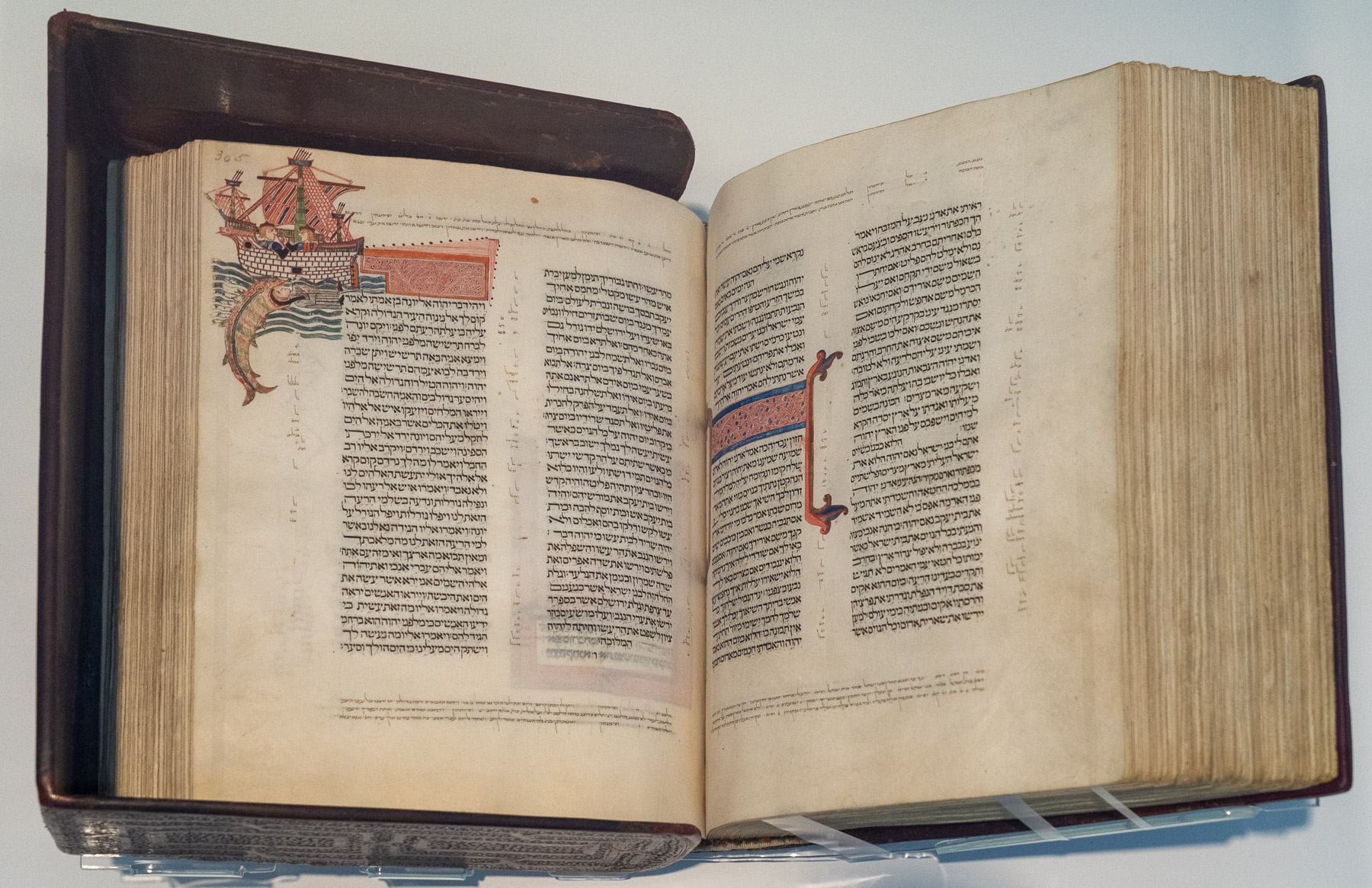 The itinerary of Egeria. A Roman aristocrat who lived in Gallaecia in the fourth century, Egeria, meets the double merit of having been the first woman writer of the Peninsula and of being the author of the first travel account that is recorded in that same geographical area. Egeria was collecting the experiences of its journey through various holy places of Egypt, Antioch or Constantinople in the form of letters. Part of that story survived the passage of time until being included in the Codex Aretinus 405, an 11th century work discovered in 1884, and which now visits Galicia from the Arezzo Library in Italy for the first time. 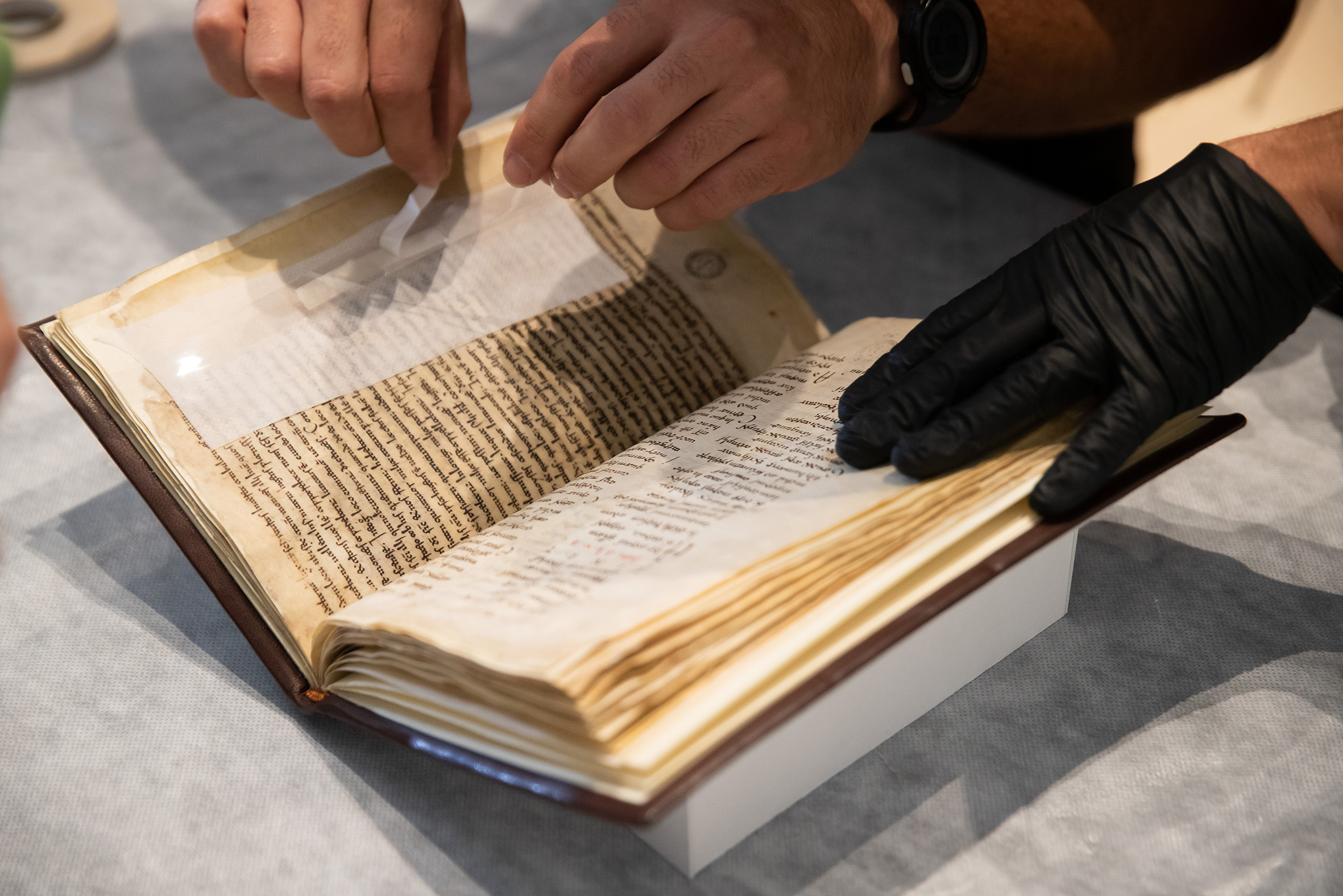 Lesenho Warrior. The National Museum of Archeology of Portugal is the place of origin of another piece of “Galicia, a story in the world” that can be seen for the first time on this land. This is the stone statue of a Galician warrior of great iconographic wealth that also allows the public to approach the Iron Age era and the first contacts between the local population and the Roman Empire. 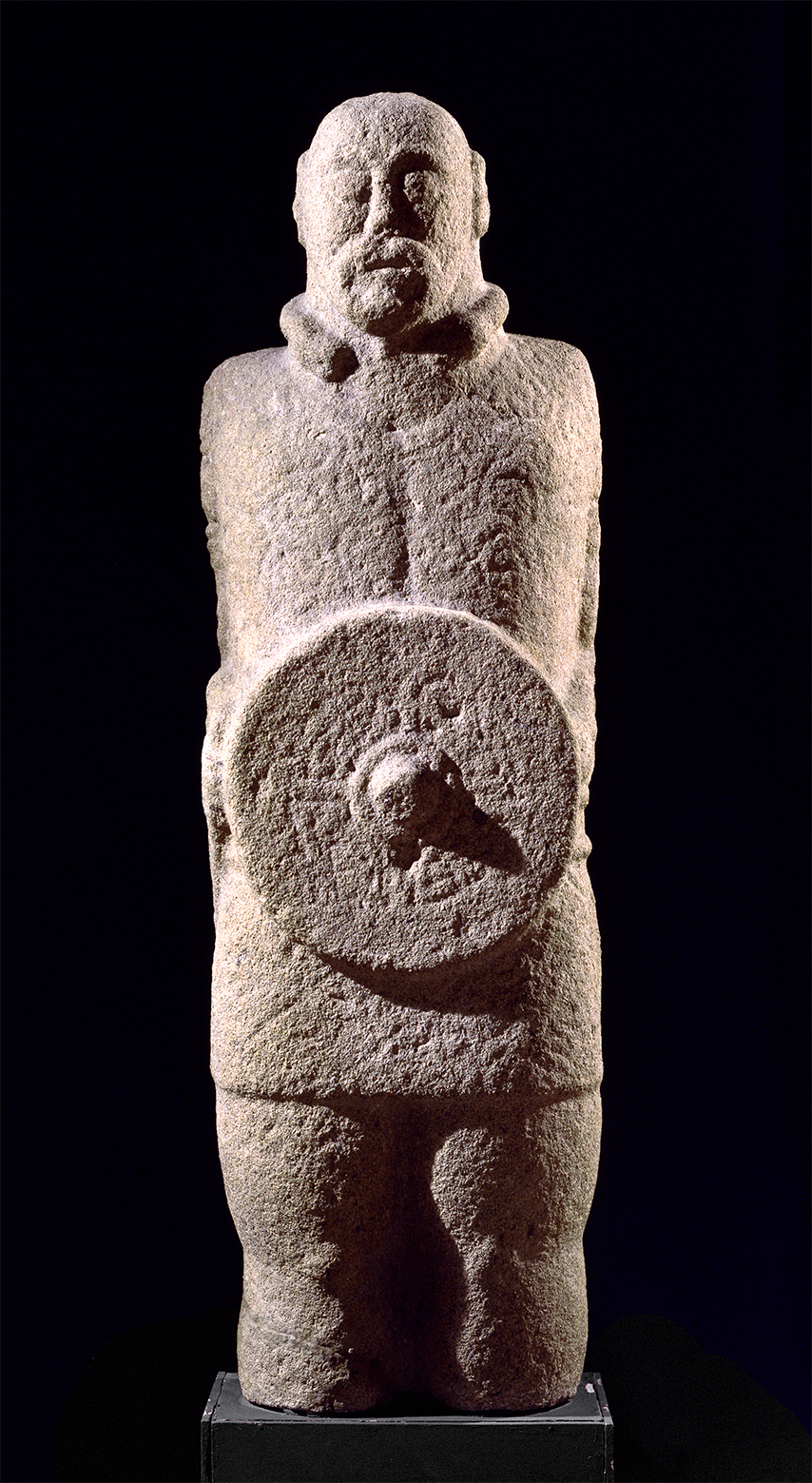 Songbook of the Vatican. The most important works and authors of the Portuguese Galician literary tradition (Alfonso X, Paio Gómez Chariño, Airas Nunes …) is present in this collection of 1,200 “cantigas” that were copied in Italy at the beginning of the Modern Age and that has temporarily left the Vatican Apostolic Library to visit Galicia for the first time. 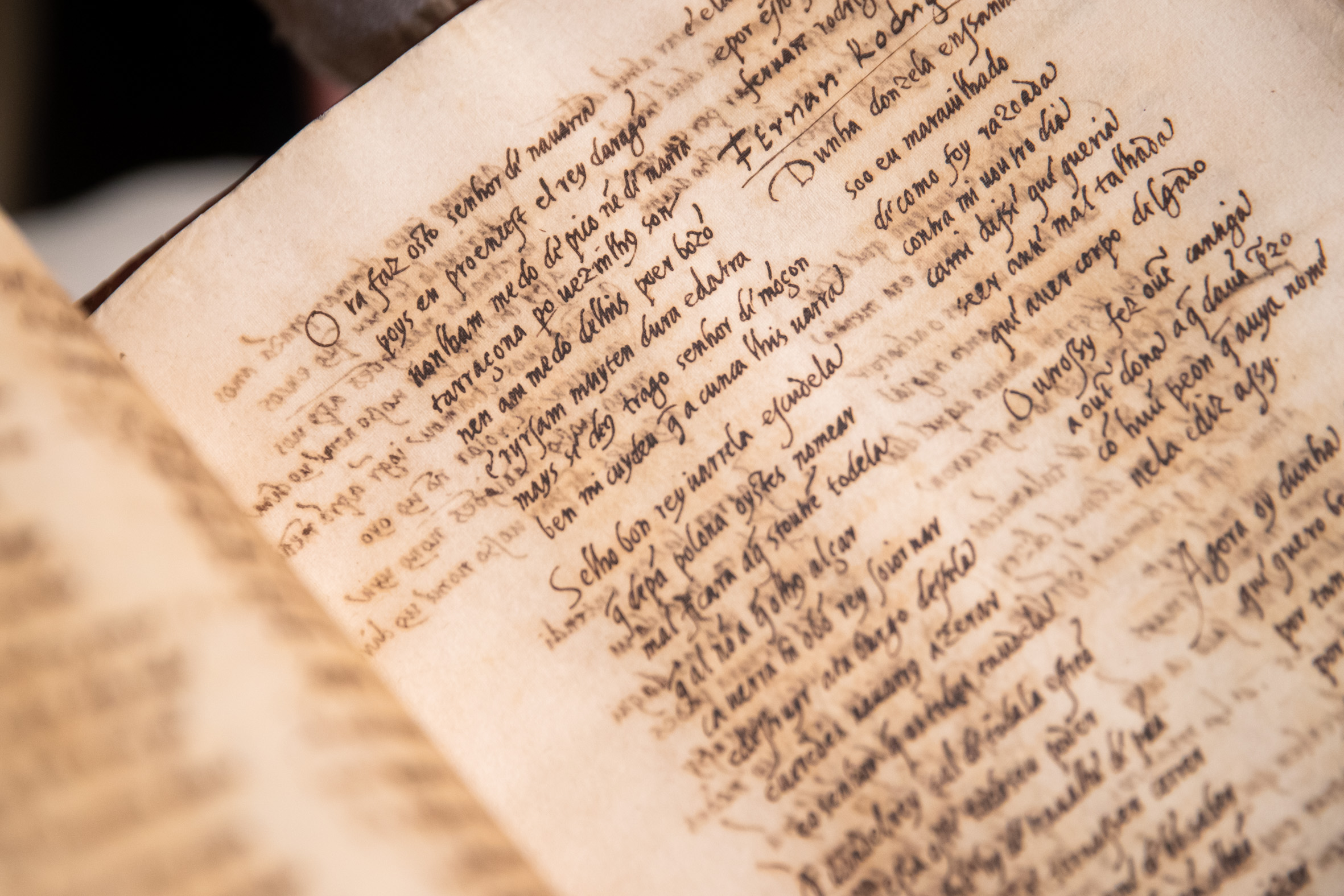 The Saint. The sculptor Francisco Asorey surprised at the National Exhibition of Fine Arts in Madrid in 1926 with a sculpture inspired by the Galician woman farmer and full of great symbolism. Years later, in the middle of the last century the piece undertook a trip to South America and since then it had not returned to Galicia. Now, it arrives from the Casa de Galicia in Montevideo so that the public can enjoy a piece as controversial in its time as significant. 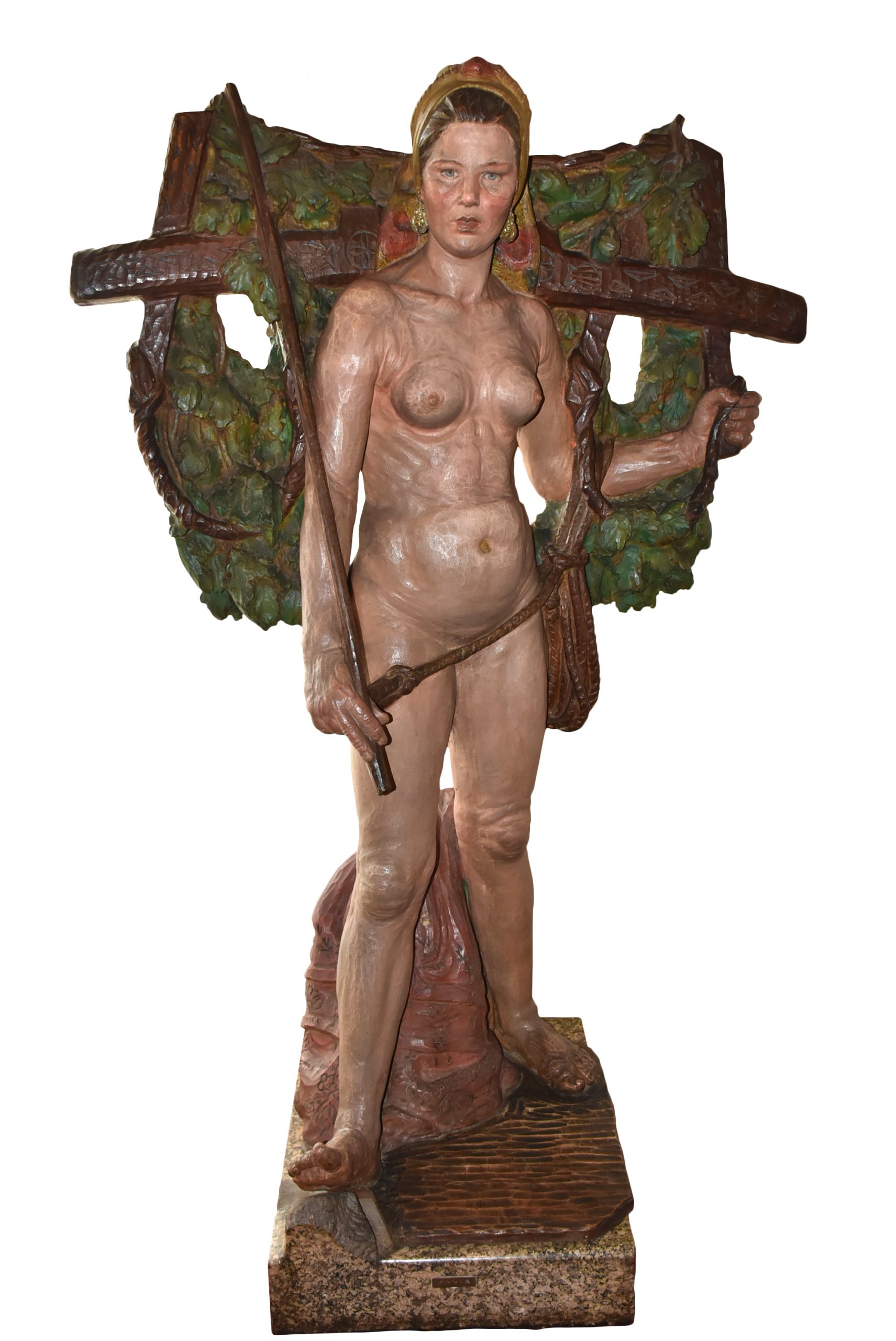 Liber Sancti Iacobi. Two of the most important copies of the Liber Sancti Iacobi, those kept in the Vatican Apostolic Library and the General Historical Library of the University of Salamanca, meet in Compostela for the first time with the most valuable of all (and also served as a model), the Calixtino Codex, to show in all its splendor the story of the visit in dreams of the Apostle Santiago to Charlemagne. 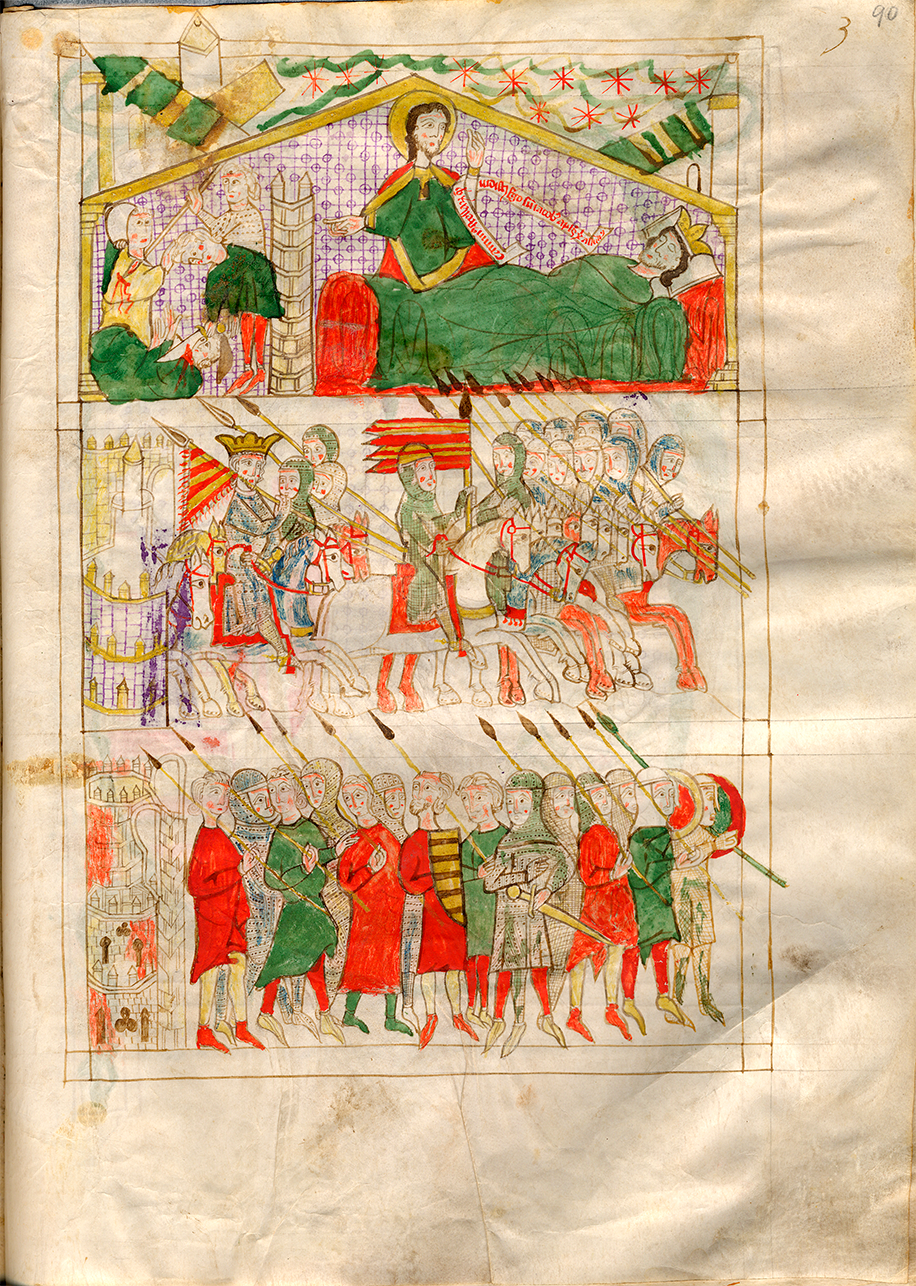 Flag of the Third of Galician of Buenos Aires. A group of 600 Galician volunteers played a leading role in defending the Argentine city from the English invasion in 1807. Its flag, which shows the shield of Galicia on one side and that of Buenos Aires on the other, is a huge piece historical importance that is also related to the events that ended up leading to the proclamation of the Argentine Republic. 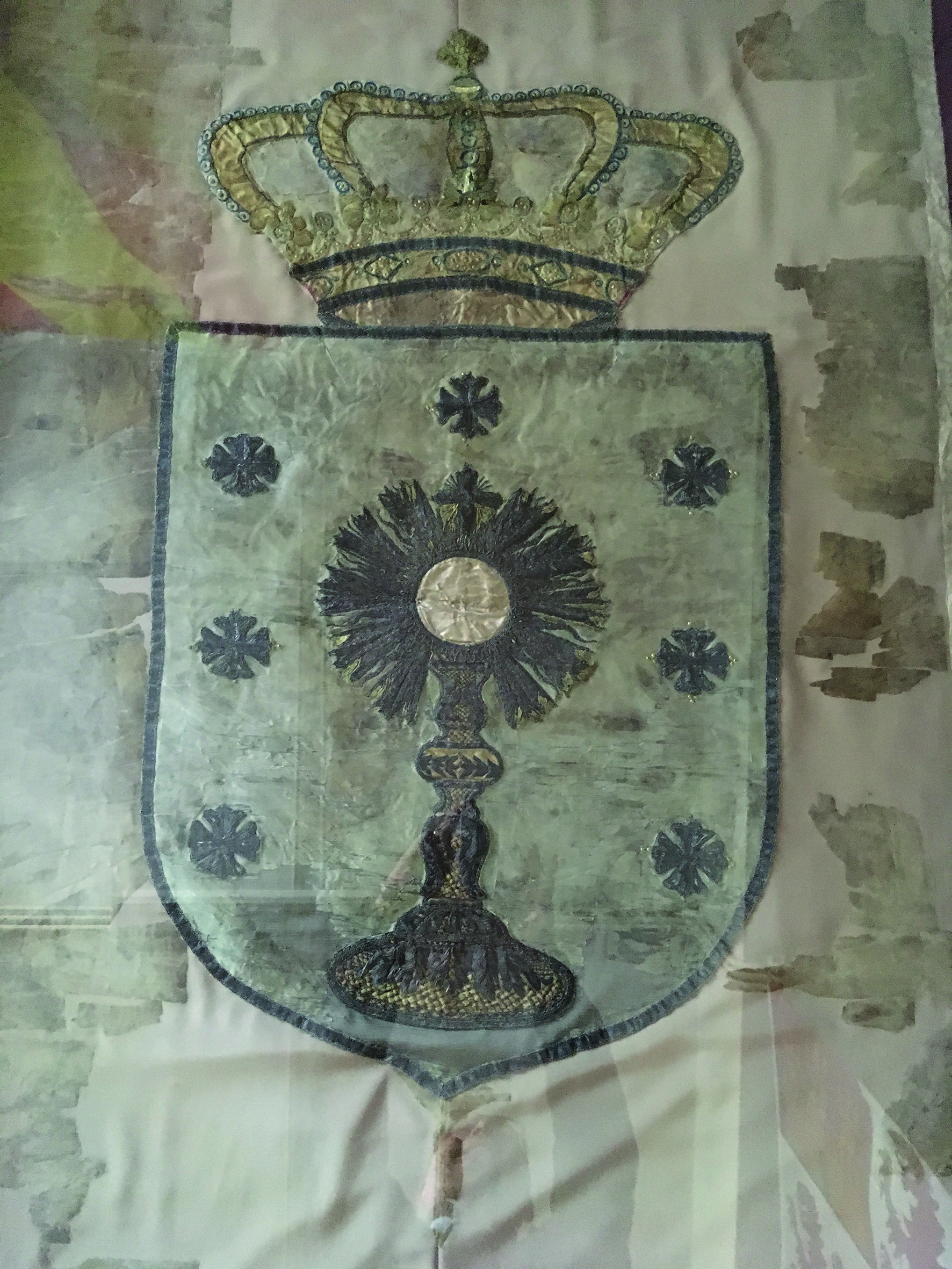 The Earthly Paradise. Part of the Galician nobility actively participated in the politics of the Spanish monarchy in the 16th and 17th centuries and some of their also became patrons and art collectors. The Great Earl of Lemos, Pedro Fernández de Castro, who gathered in Monforte an important collection of artworks, such as the Earthly Paradise of Pieter Bruegel The Young. Custody currently in the Prado Museum, has also joined the exhibition of the Gaiás Center Museum. 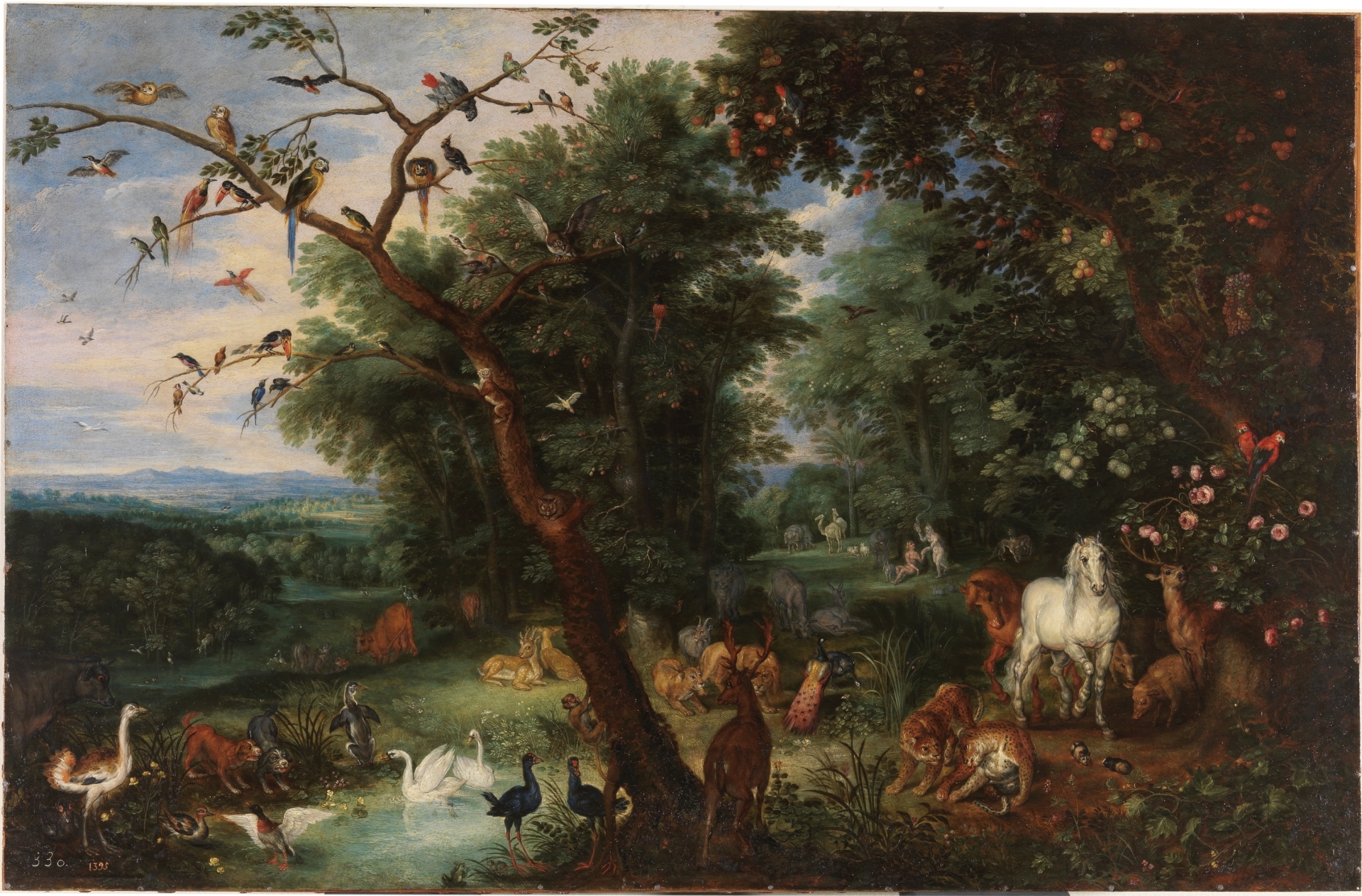 All these pieces and the rest of the works present in Galicia, a story in the world, can also be contemplated through augmented virtual reality systems so that the viewer’s experience is more complete and surprising. With the help of virtual reality glasses you can embark on a transatlantic bound for America following in the footsteps of the emigrants of the mid-twentieth century, look in Turkey for the most remote inscription concerning the Galician peoples or immerse yourself in the medieval atmosphere of the Camino from Santiago.