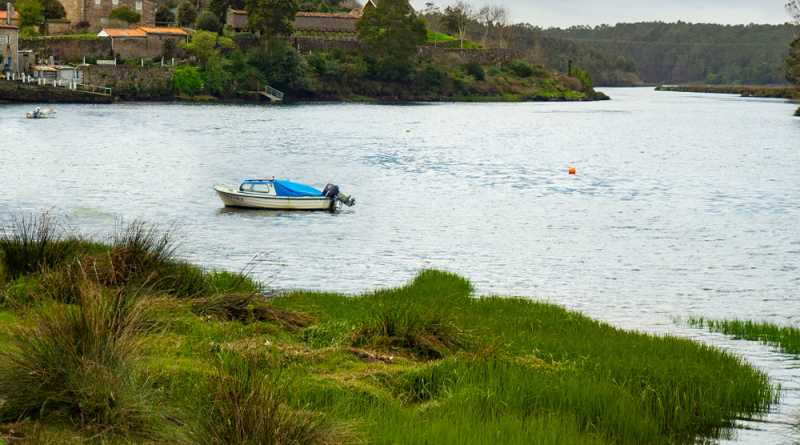 Famous for its castle, for being one of the main gateways to the Costa da Morte and for its abundant megalithic heritage, the municipality of Vimianzo in A Coruña also has a small place where history, art and ethnography converge. We are in Porto de Cereixo, a jewel often overshadowed by the most famous and emblematic spaces of the region, but which does not cease to surprise all those who dare to discover it.

The first thing that attracts attention of the visitor who approaches this place located in the south border of the estuary of Camariñas is the silhouette of the stately construction that dominates all the nucleus. These are the Towers of Cereixo, a pazo with airs of a fortress erected in the 17th century in which the two towers that give it its name and the coats of arms that remind us of a good part of the nobility that once exercised power over the entire region stand out. It is a private property that is not open to visits, but whose monumentality can be appreciated by taking a walk beside its walls.

In the vicinity, besides a small square crowned by a hundred-year-old caraballo, there is another of the jewels of the place: the church of Santiago de Cereixo. Its harmonious dimensions and the fact that most of its original Romanesque elements have been preserved make this small mid-12th century temple a building of unquestionable value. But, in addition, this church has an element that makes it a unique monument. In the tympanum of the south door you can see a stone representation of the transfer in a boat of the remains of the Apostle Santiago guarded by seven of his disciples. Only four similar representations from the Romanesque period are preserved in the whole Peninsula and the fact that one of them is precisely in this place of Vimianzo makes us think that its port could have been in the past a landing place for many pilgrims who arrived by sea to Galicia to go to Santiago de Compostela and visit the tomb of the Apostle.

Some researchers consider that the original dock that gave its name to the place was a point of great commercial and strategic importance at the beginning of the last millennium, but that it would have disappeared due to the incursions of Viking and Arab pirates. King Alfonso IX ordered the reconstruction of the place in the 13th century and even visited it. The Jacobean phenomenon, the emigration and the commerce caused that Porto de Cereixo returned to be an important port in later centuries. It served both as a place of passage for the pilgrims who began their route there on foot, as a meeting point for the region’s residents who were picked up before setting out on their journey to other territories in search of opportunities for work and progress, and as a space for loading and unloading goods.

Moreover, the same waters that favoured the transit of those ships were the ones that fed another of the monuments that have reached our days and that contribute to the patrimonial variety of Porto de Cereixo. This is the tidal mill of Cereixo, also known as Muíño das Torres or das Arceas. There is documentary evidence of its construction in 1674, which makes it one of the oldest facilities of this kind in Galicia. Located at the confluence of the Carnés or Cereixo stream and the Camariñas estuary, this building has three stones that were moved by the force of the river waters and the tides to grind wheat and corn. Part of the cereals processed there surely came from the enormous hórreo located in its surroundings and built centuries ago to keep the tributes that the neighbors of the area had to pay. With 26 meters in length and 19 pairs of feet, the hórreo of Vila Purificación is one of the longest in Galicia and can be seen from an old path that follows the bank of the estuary to the mill.

Also, from the mill, a river walk along the river Carnés brings us closer to the church of Santiago, the Towers of Cereixo, and some examples of careful popular architecture that make Porto de Cereixo a very charming place. Do you need more reasons to visit it?