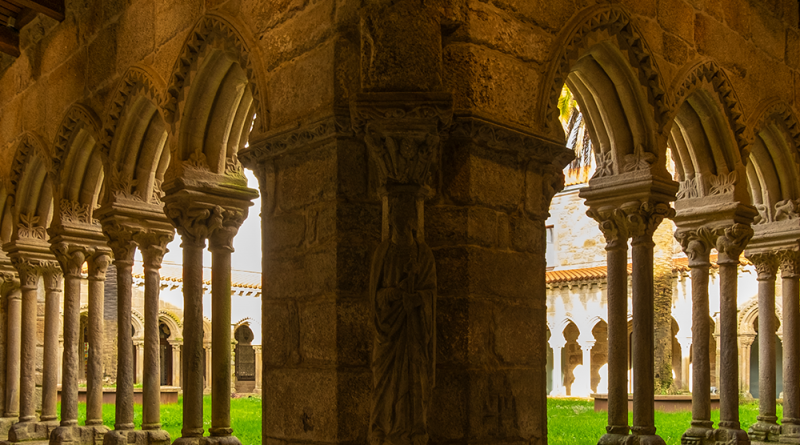 Ourense is a city rich in places that combine art and history and that invite us to delve into the local past enjoying an environment of great beauty. And among those many places, the cloister of the old convent of San Francisco deserves a prominent position not only for its heritage values, but also for the various events it witnessed – and sometimes a protagonist – during its 7 centuries of life.

The construction of this cloister dates back to the first half of the 14th century, making it the oldest piece of the convent from which it takes its name, although its history begins almost 100 years earlier, since it was in 1237 when the Franciscans arrived to Ourense. Their political and religious disputes with Bishop Pedro Yáñez de Novoa led to the first dependencies they had built being destroyed only a few decades later (at the end of the 13th century), so the cloister that has reached our days is already part of the new convent built after the intervention of Pope Clement V.

Its works lasted for a quarter of a century (from 1325 to 1350) and the cloister shares with the Church of San Francisco (1348) its Romanesque-Gothic style and a story in which two curious events stand out. The first took place in the 19th century as a result of the confiscation of the assets of the Church and religious orders. The convent, which had undergone various modifications and extensions over the years, but which had maintained its original religious use, was converted into an infantry barracks in 1843. And thus the cloister through which the Franciscan monks had walked praying for centuries it came to be occupied by the military. This situation continued for almost a century and a half.

The other notable event for the configuration of the place would already occur in the first third of the 20th century. In 1923, both the cloister and the church were declared a national monument, but that did not prevent the history of these two buildings from taking different paths soon after and leading us to the current situation. The authorities decided to relocate the church in such a way that in 1929 it was transferred stone by stone to its current location, on one side of the San Lázaro park, leaving the orphan cloister of the cult site that had accompanied it for 6 six centuries.

After the military left, in the 80s of the last century, the cloister went through a stage of abandonment, but after various bureaucratic ups and downs it was finally recovered, valued and opened to the public near a decade ago. Since then, the residents of Ourense and visitors to the city have been able to discover its history and contemplate all the architectural and sculptural details that have led to the place being considered as one of the most important and best preserved cloisters of Romanesque-Gothic style in Galicia.

The double columns that, with the exception of four single columns, form almost the entire ensemble holding 63 arches in total and the careful and varied decoration of its capitals are its two most significant elements. Mythological creatures and animals rare in these ornamentations, such as elephants, in addition to plant motifs and scenes from the Old Testament, attract the gaze of visitors and invite them to delve into a story that speaks of sin and the fight of good and evil.

The cloister also shares space with other places of great cultural interest that make the visit even more recommendable. On one side is the modern municipal auditorium, inaugurated in 2005 and which has become one of the epicenters of local cultural life. And on the other you can see the San Francisco cemetery, a graveyard that was blessed in the early 19th century and declared a Site of Cultural Interest in 2000. Walking through its gardens and its monumental tombs, it is possible to see the resting place of characters illustrious like Blanco Amor, Otero Pedrayo and Vicente Risco, among others.