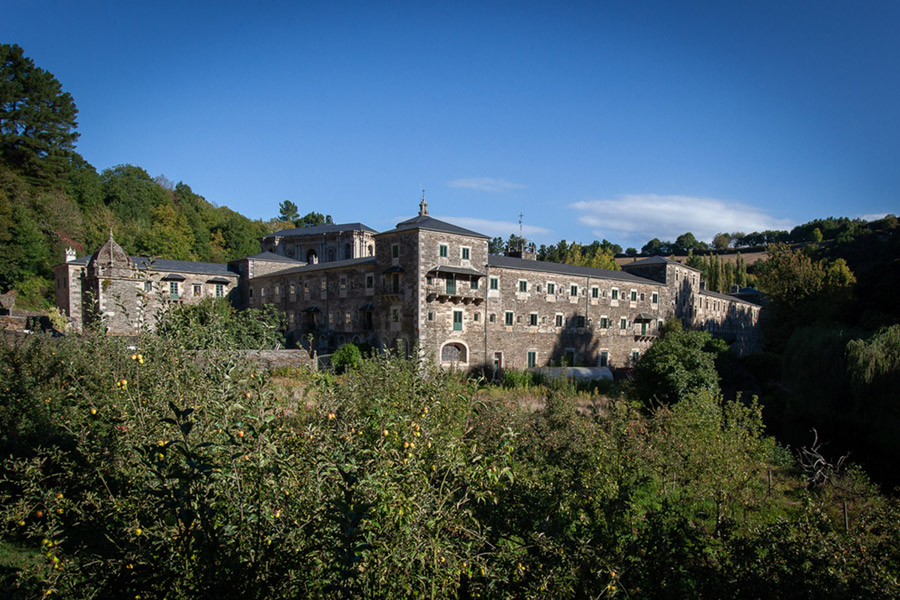 The Monastery of San Julián (or San Xián), known as Monastery of Samos, is located in the place to which it gave its name: Samos, a municipality of the Sarria region, in the south of the province of Lugo, not far from the border with Castilla. Samos is one of the three inhabited monasteries of Galicia, and it is also the Spanish monastery that has been inhabited the longest (more than 1,500 years of almost uninterrupted monastic life).

The monastery was established in the era of the Suebian Kingdom by Martiño de Dumio, an important religious of Hungarian origin. Of these years comes the name of Samos, which has its origin in the suebian word sámanos (place of monks). The place was abandoned for a brief period due to the Muslim invasion, and was recovered by King Froila I. In the monastery stayed during his adolescence the future Alfonso II the Chaste, King of Galicia and Asturias. Thanks to this, the monastery gained real protection and expanded its domains. In the middle of the tenth century, the bishop of Lugo carried out an unsuccessful attempt to take control of the monastery. In 960, Samo´s monks adopted the Rule of Saint Benedict, to which they remain faithful today. A short time later they followed the Cluniac reform.

During the Middle Ages, Samos was one of the most important religious centers of the peninsular Northwest. In the seventeenth and eighteenth centuries the monastery suffered many reforms (made due to the destruction caused by a fire in 1558) that gave it its current appearance. In the 19th century, the monks were exclaustrated by the Disentailment of Mendizábal. They returned to the monastery at the end of the century. Since then, they continued their life close to God, without major alterations that another fire in 1951.

The monastery has a great artistic value, and we can observe many styles, such as Romanic, Late Gothic, Renaissance, Baroque or Neoclassical. The monastery is grand and monumental in size and shape, as well as austere and simple in decoration. The monastic church is essentially Baroque, with forms that anticipate the Neoclassicism. Its main façade has a staircase that reminds us of the Cathedral of Santiago.

Samos has two cloisters; the big one and the little one. The great cloister or Cloister of P. Feijoo (an important Galician thinker and religious of the 18th century), is the largest cloister in Spain and has at its center a beautiful statue of Father Feijoo. It has a Herrerian style, and was built in the seventeenth century. The other cloister, the small one, or Cloister of the Nereids, is of late-Gothic style, and receives its name from the fountain that is in its center, whose cup is supported by sculptures of these mythological creatures.

Today, this long-lived monastery is perfectly preserved, and has guided tours that allow you to enjoy its beauty and enormity. It is thus, a perfect reason for a trip through the lands of the Sarria River, which are not more than an hour from Lugo capital.