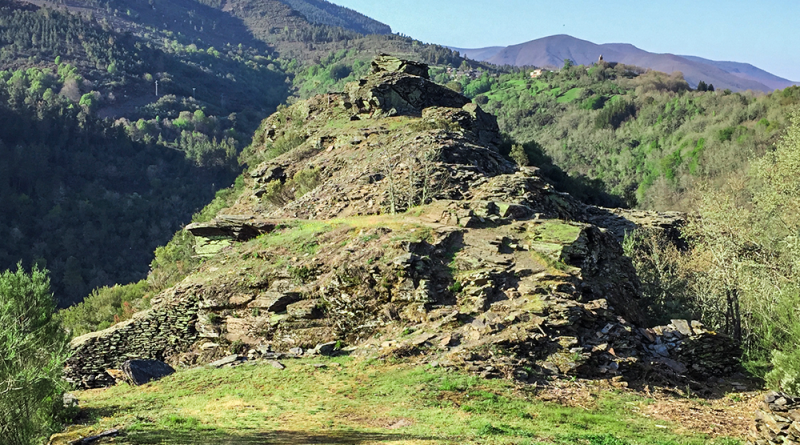 Scattered throughout the four provinces and located in strategic locations, the castros are one of the most characteristic elements of the historical heritage of Galicia. A few have been excavated and conditioned so that the visitor can appreciate their majesty and try to understand how its inhabitants lived, but there are several hundreds that still remain hidden, protected from natural elements and waiting to reveal their secrets. Other castros have undergone several initial recovery works that allow us to begin to appreciate their value. This is the case of Castro de Vilar, a spectacular enclosure located 550 meters above the mountain that stands next to one of the meanders that the Lor River traces as it passes through the Lucense municipality of Folgoso do Courel.

The first study and cataloging of Castro de Vilar dates back to the late 70s of the last century in the framework of a larger study on the settlements in the O Courel area. The specialists then concluded that, like the other castros in the area, the Castro de Vilar was linked to the mining operations of the Roman era. But we will have to wait for future excavations to know the specific role that the place played in that process.

Currently, it is possible to enter the site and enjoy the remains of the buildings in which their original inhabitants lived two millennia ago. The weed cleaning works undertaken a couple of years ago have opened the way for visitors and brought to light a significant part of those buildings. A walk through the place not only allows us to imagine what life was like at that time, but also invites us to reflect on how it was possible to build an enclosure of these characteristics, with walls up to 6 meters high, in such a steep place. The walls of some of the constructions extend over the almost vertical walls of the promontory, composing an impressive picture. From there you can enjoy beautiful views of the Courel Mountains and the Lor River course.

Due to the rugged conditions of the place it is advisable to move with caution in the castro to avoid accidents. To get there you have to go to the village of Vilar and there take the path that starts from its magnificent chestnut forest. In addition, in the village itself it is possible to visit the small ethnographic museum created by a neighbor with the farming tools and musical instruments that he has been recovering and gathering over the years.