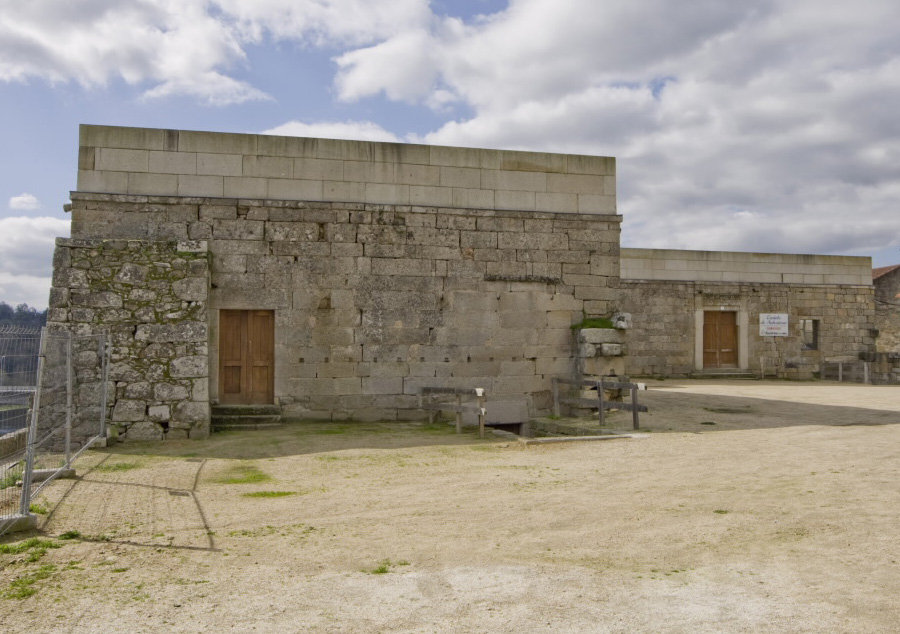 The enclosure that constitutes the fortress is located in the town of Salvaterra, which borders on the Miño and Portugal (Monção). The two countries are united through the international bridge that crosses the river. The architectural complex of 9700 square meters that is this fortress has today the Casa del Conde (where are the curious caves of Doña Urraca, known for its double spiral staircase), the Pazo de Doña Urraca, the Chapel of the Virgin of Comba, the Chapel of San Lourenzo (which today is a parish church) and the walls. It is known the name of the creator of the walls and the famous stairs in the seventeenth century, the French engineer Carlos de Lessar. In addition to its obvious cultural and architectural value, the Fortress of Salvaterra has an interesting history linked to the history of the town, and full of wars and invasions.

There is evidence that the lordship of Salvaterra was donated to the church of Compostela in the ninth century. The following information we received about the site is related to the fortress. This was created in the twelfth century, by order of Fernando II, who decided to fortify the town to save the kingdom from Portuguese attacks (hence Salvaterra). Shortly afterwards Salvaterra became the barracks of Queen Doña Urraca, of Galicia, León and Castilla, in the context of the wars against her half-sister, Doña Teresa, who proclaimed herself Queen of Portugal (then belonging to the Kingdom of Galicia). Doña Urraca, together with the forces of Archbishop Xelmirez, defeated the forces of Doña Teresa and re-established the order in the county of Portugal.

Another important chapter in Salvaterra’s history occurred in the 15th century, when it served as the last refuge for the controversial Pedro Madruga, the most important figure of the Galician nobility of the 15th century. At that time, Galicia was a very violent territory that had just emerged from the Irmandiñas Wars, characterized by clashes between feudal lords. At the height of his power, Pedro Madruga came to dominate all southern Galicia, and was called by the locals “our king”. But when he arrived in Salvaterra he was already in the decline of his power. The Catholic Kings wanted to pacify the Kingdom of Galicia and end the power of Pedro Madruga (who had supported the Civil War prior to Beltraneja, against Isabel of Castile). Thus in 1479 they supported Pedro’s enemies (including the archbishop), and he had to defend himself against them in Salvaterra, before fleeing definitively to Portugal.

The third most prominent event of those that occurred in this fortress was the Portuguese invasion. In 1640, after 60 years of Castilian domination, the Portuguese declared their independence. Thus began the War of Restoration, during which the Portuguese invaded and took the Fortress of Salvaterra. During the 16 years they were there (1643-1659) they reformed the fortress and made it impregnable. They erected the chapel of the Virgin of Santa Comba, which still has three Portuguese coats of arms. To recover the village, Spanish troops had to create a network of border fortresses and take neighboring Monção to cut off Portuguese supplies.

Recently, the fortress was restored by the Salvaterra Town Hall, which now celebrates the Festa do Viño do Condado inside the walled enclosure. In 1949, the fortress was catalogued as a tourist attraction. Today, the fort, in perfect condition and close to the gigantic recreational area/park of Canuda, is an imposing monument that shows off its history.